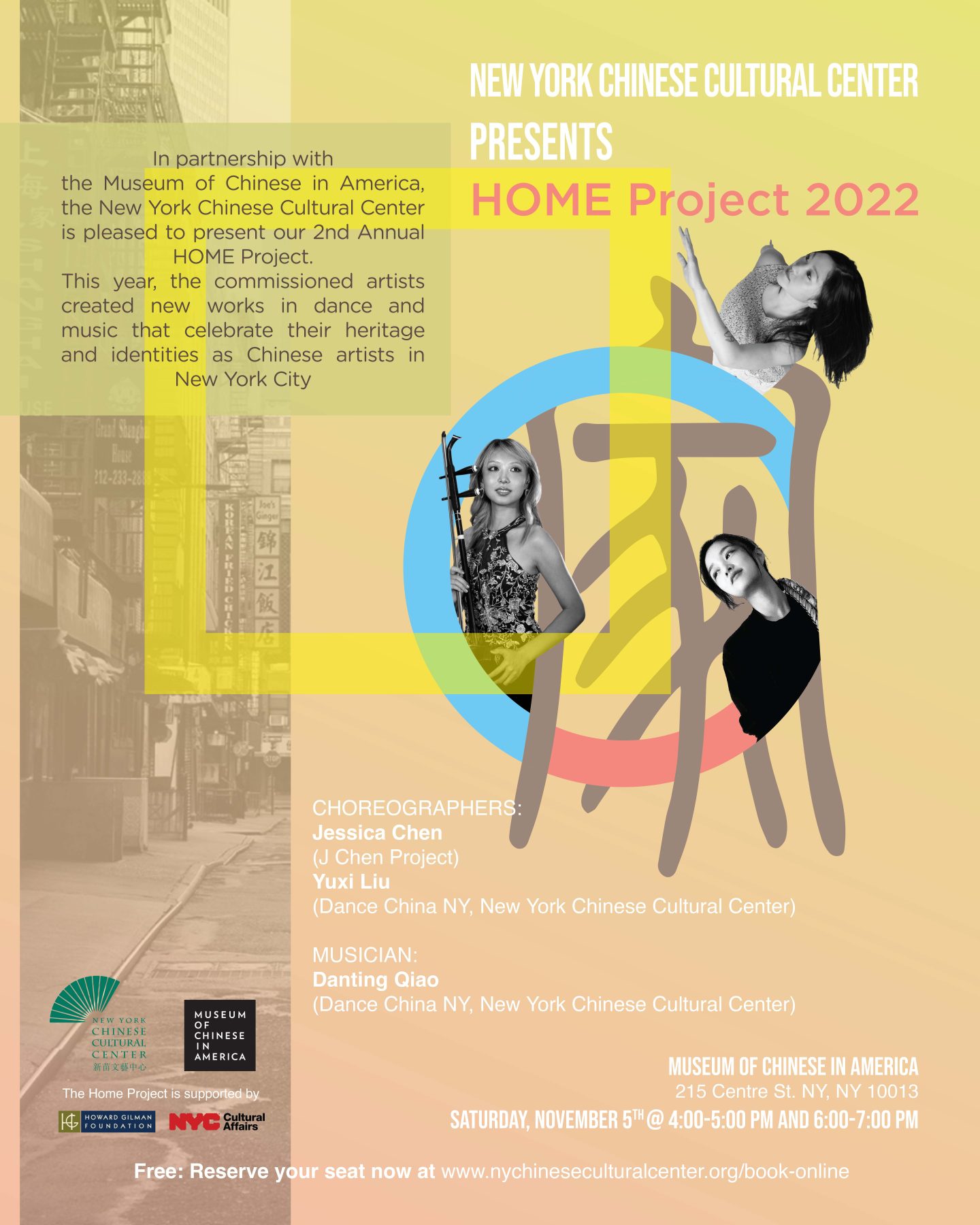 In partnership with the New York Chinese Cultural Center, the Museum of Chinese in America (MOCA) is pleased to present the 2nd Annual HOME Project with two shows of dance and music on Saturday, November 5, from 4:00 – 5:00 P.M. EDT and 6:00 – 7:00 P.M. EDT.

This year, the commissioned artists created new works in dance and music that celebrate their heritage and identities as Chinese artists in New York City.

Music: NR Off by Happa & Pete Martell, Jenseits (Dub) by Lumisokea, Drinking From The Well by Stefan JósK

“Knot” is a dance piece blending traditional Chinese dance and contemporary dance elements as an expression of our Chinese identity.

The first half of the composition includes a variety of Chinese traditional musical elements. This part not only paints a picture of fall winds sweeping the fallen leaves, but also evokes the feelings of homesickness, nostalgia, yearning, and longing.

In the second half of the piece, Spring Flowers, the composer brings out a new style. This part creatively combines Western and Chinese elements. By mixing traditional and modern musical instruments, it delivers positive, festive and joyful energy to the audience.

Jessica Chen is the granddaughter of refugees and the daughter of immigrants. For three generations, her family sought safety and a place to call home. In her work, she studies history, myth and her own Asian American experience to understand her place in the contemporary moment and imagine a brighter future. With this new work, she is exploring what parts of our stories, identities, and culture we lose when moving from land to land to land.

“I dedicate this work to my maternal grandfather, 周伯達 Po-Ta Chou, whom I called YeYe. He was a warrior, a leader, and an honorable man.”

Yuxi Liu received her professional training from Beijing Normal University (2014-2016). She is a dance instructor with Modern College of Northwest University. In 2022, as the representative of USCPFA, she participated in an outstanding performance to usher in the new year, which was held in Times Square in New York. In 2020, she performed at the Metropolitan Museum, and in 2013, she performed at the “Twelve Days of Dance” in the National Center for the Performing Arts. She performs regularly with Dance China NY, New York Chinese Cultural Center.

Lu Wang is a graduate student in NYU Tisch Dance program, pursuing a dual degree in MFA in Dance and MA Dance Education (K-12 track). She also did a year of professional training in Martha Graham dance school.

Mikhail Graham is a New York based producer and multi-instrumentalist. First learning violin at age 10, by 12 Mikhail began to dabble in composition and the rest is history. Now mixing modern and classical influences with an eclectic synth pop sound, Mikhail releases music under the moniker yrry.zip.

Tong Kong is an eclectic multi-instrumentalist who plays dizi, horn, flute, and 15+ instruments. Being a Chinese and Western-trained musician, she draws inspiration from both worlds and has developed an insatiable appetite for exploring new musical ideas. She has received her bachelor’s degree from Wesleyan University and master’s degree from University of Pennsylvania and is currently based in NYC as a full-time software engineer and part-time musician. She has performed at notable venues and events such as Carnegie Hall, Lincoln Center, Hudson Opera House, and Ivy League Spring Festival Gala, and has performed with groups including the Chinese Music Ensemble of New York, Asian Cultural Symphony Orchestra, Yale Symphony Orchestra, and MIT Chinese Music Ensemble. Her accolades include winning first place at the Beijing International Music and Art Festival, the gold prize at the Spain Juvenile Art Festival, and first place at the New Star of China Television Show, among others.

Danting Qiao is a young and aspiring Erhu virtuoso. She is a soloist in the New York Chinese Cultural Center. She set forth on her musical journey learning Erhu and piano at the age of six and violin at the age of nine. In 2013, she was admitted by Peking University with the highest Erhu exam score and led the orchestra in various competitions. After receiving her bachelor’s degree in Beijing, she continued to pursue higher education at CUNY Baruch College and graduated in the Arts Administration Masters program in 2021. Danting has received professional recognition for her performances in world-renowned venues such as Carnegie Hall, Jazz at Lincoln Center, Queens Museum and Hudson Opera House.

Fang-Ting Yeh is a choreographer and freelance dancer based in New Jersey. She had performed one of Martha Graham’s works – Heretic with Graham 2 at the Joyce Theater. In 2021, Fang-Ting created her soloist dance film – MURMUR_S which was the winner of Open Vision Film Fest, and Silent But Not Silenced won the Best Direction of Black & White Film Festival. This year Fang-Ting’s choreography Chaos and Yuan 緣 has been presented at Dixon Places “8 In Show” series and We Belong Here: AAPI festival at Arts On Site.

Clearwater Studio was founded by Calvin and Jimmy who met when they were in LASALLE, an art school in Singapore. Both Calvin and Jimmy started out as session guitarists, performing for various local artists and events. They eventually found their passion in music production and went on to pursue their dreams of producing chart-topping tracks from their small bedroom. They worked with various local artists to produce their music and worked with commercial clients. Most notably, they were one of the six winners of Universal Production Music’s composition competition UCompose 2021. Clearwater Studio’s goal is to continue producing high-quality music while ensuring clients’ ideas are realized.

Bo Tian is a Chinese Neo-traditional Music composer. He is a signed musician in Cézame Music Agency and Tencent Music Entertainment Group. Representative works include but not limited to the theme song of the game “Legends of The Three Kingdoms”, and the theme song of the movie “Jade Dynasty I”.

Jessica Chen is an emerging American dancer and choreographer. She founded J CHEN PROJECT, a 501c3 contemporary dance company based in New York City, in order to create dance works that deconstruct identity, cultural diversity, and belonging. Through J CHEN PROJECT, she seeks to create more opportunities for marginalized communities to participate in the arts and expand their capacity for imagination through artistic expression. Chen is the first person in her family to be born in the United States. In 2013, she made a miraculous journey back to the stage after suffering a horrific car accident that left her in a coma for 13 days. Movement is her vehicle to tell stories, better understand our human existence, and quite literally, heal wounds. Her work has been presented at MoMA Museum of Modern Art for New York Fashion Week, Lincoln Center’s Restart Stages, Kennedy Center Millennium Stage, MACY’s Thanksgiving Day Parade, TEDx Semester at Sea, World Expo-USA Pavilion in Shanghai, and featured in Google Arts & Culture by the Asian American Arts Alliance. Chen is a 2021 GALLIM Moving Women Artist-in-Residence, 2021 Dance Lab New York Choreographer, and 2021-2022 Artist-in-Residence at MOCA Museum of Chinese in America.

Maya Lam (she/they) is a Manhattan-based Asian-American dancer, choreographer, and interdisciplinary artist. Maya has performed works by Sidra Bell, Jessica Lang, Jenn Freeman, Michael Waldrop, Yin Yue, Nancy Lushington, and Samuel Pott. As a recipient of a City Artist Corps Grant, Maya has curated an interdisciplinary performance installation. She was also commissioned by The Kennedy Center to create a short lm for their Art-Under-A-Minute Series. Maya is interested in the investigative processes that challenge societal ideals and power structures and strives to comment on these concepts with a multifaceted approach.

Tsubasa Nishioka was born in Japan where he started ballet. He later went on to modern and contemporary dance. In 2017, he was accepted to The Ailey School and got a scholarship in 2018. He performed at “Ailey Sprit Gala” with Alvin Ailey’s “Battlefield” at Lincoln Center. He also worked with Fumihito Shimizu, NBA Dance Company, Omar Roman de Jesus, Darshan Bhuller and Marcus Jarrell Wills. Now, he is a member of i KADA contemporary Dance Company, Vashti Dance Theater and Yu.S.Artistry. He was awarded 1st place in the Chiba Select Young Dancer’s Performance, 3rd place in the Saitama Dance Competition, 3rd place in the Dance Competition in Sendai and 2nd place in the NBA National Ballet Competition.

This program is supported in part, with public funds from the New York City Department of Cultural Affairs in partnership with the city council, City Council Member Chris Marte, Mark Levine, the Manhattan Borough President, New York State Council on the Arts with the support with of the Office of the Governor and the New York State Legislature, Howard Gilman Foundation, Dance/NYC’s Dance Advancement Fund, made possible by the Howard Gilman Foundation and the Ford Foundation.