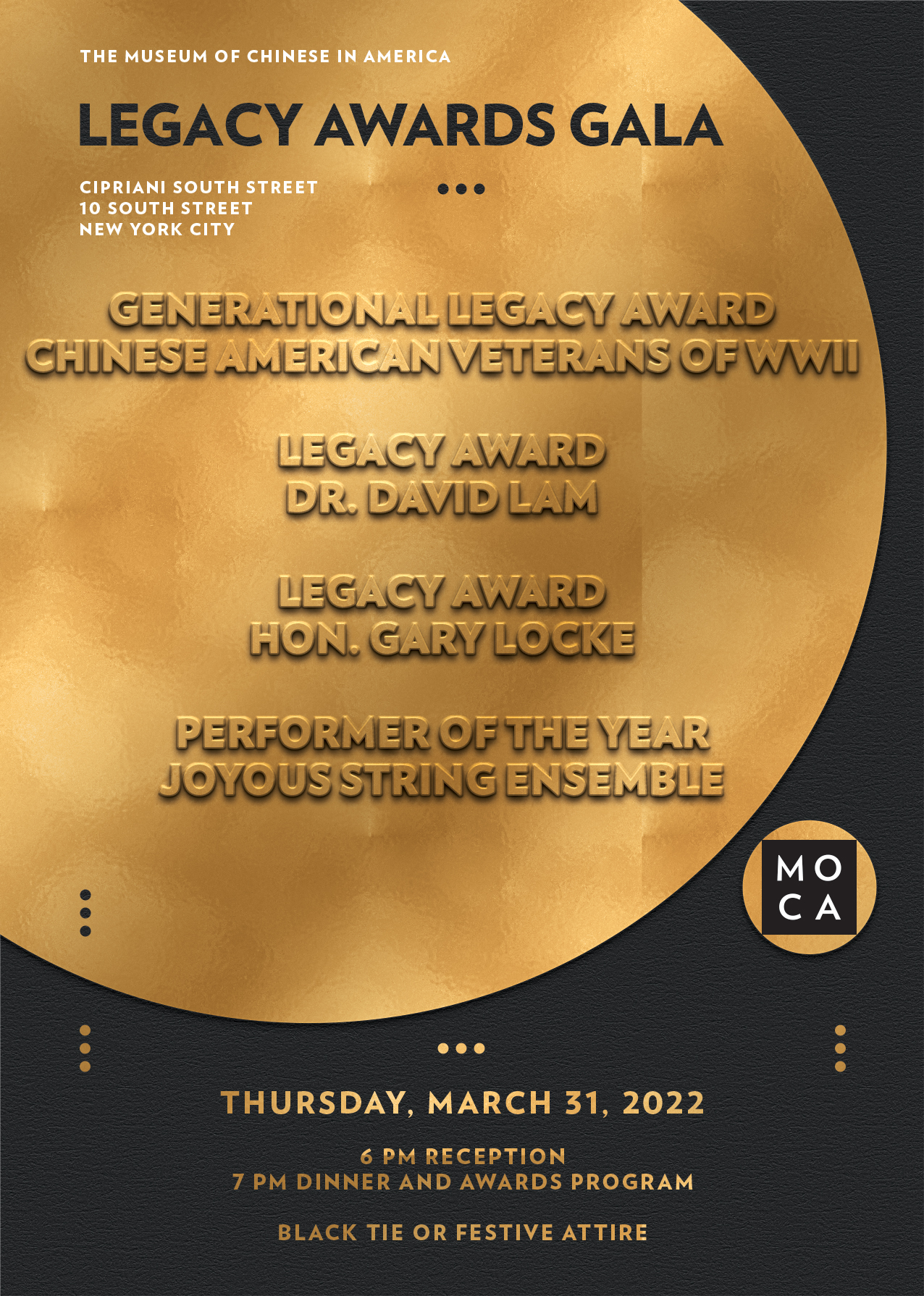 We are excited that the 2022 Museum of Chinese in America (MOCA)’s Legacy Awards Gala will be held in person at Cipriani South Street on Thursday, March 31 in New York City. Since its first Gala in 1995, MOCA has celebrated the outstanding contributions and accomplishments of nearly 100 individuals and families whose unconditional service as pioneers, role models, and leaders have paved the way for generations.

The MOCA Board of Directors and Gala Co-Chairs David Henry Hwang and Patricia Pei cordially invite you, your family, and friends to join us for an evening to remember.

This year, MOCA will present the Generational Legacy Award to Chinese American Veterans of World War II for their contributions and sacrifices made in service to the nation and community. We will also honor Dr. David Lam (Legacy Award), the first Asian-American CEO to take a company public on the NASDAQ exchange; The Honorable Gary Locke (Legacy Award), former Governor of Washington State and former U.S. Ambassador to China; Joyous String Ensemble (Performer of the Year), an international sensation for their brilliant musicianship.

For event inquiries, please contact Amy Doherty at amy@garwoodevents.com or 212.678.0231.

In 2018, following years of grass-roots campaigning and advocacy from Chinese Americans across the U.S., Congress authorized the Congressional Gold Medal (CGM) to be awarded to the Chinese American Veterans of World War II. These veterans’ acts of patriotism, loyalty, and courage occurred at a time when the Chinese Exclusion Act of 1882 prevented non-U.S. born Chinese Americans from obtaining citizenship. As many as 20,000 served, 40% of whom were not American citizens yet answered America’s call to serve with pride and honor. For over 70 years, Chinese American patriotism went unrecognized until now.

MOCA is proud to honor and remember the contributions of Chinese American WWII Veterans and join hands with the American Legion Cathay Post 384, Chinese American Citizens Alliance (C.A.C.A.), and Chinese Historical Society of America (CHSA) in being an official Commemorative Partner of the WWII Chinese American G.I. Program, a national initiative that has hosted a series of virtual events to educate people around the world about this often forgotten and ignored generation of veterans. MOCA recognizes that we must all seize what may be the final opportunity to tell the story of these veterans.

Since the Congressional Gold Medal (CGM) National Ceremony was hosted in September 2021, MOCA is honored to designate its Gala as a regional event to celebrate the contributions and sacrifices Chinese American WWII Veterans have made in service to the nation and community. 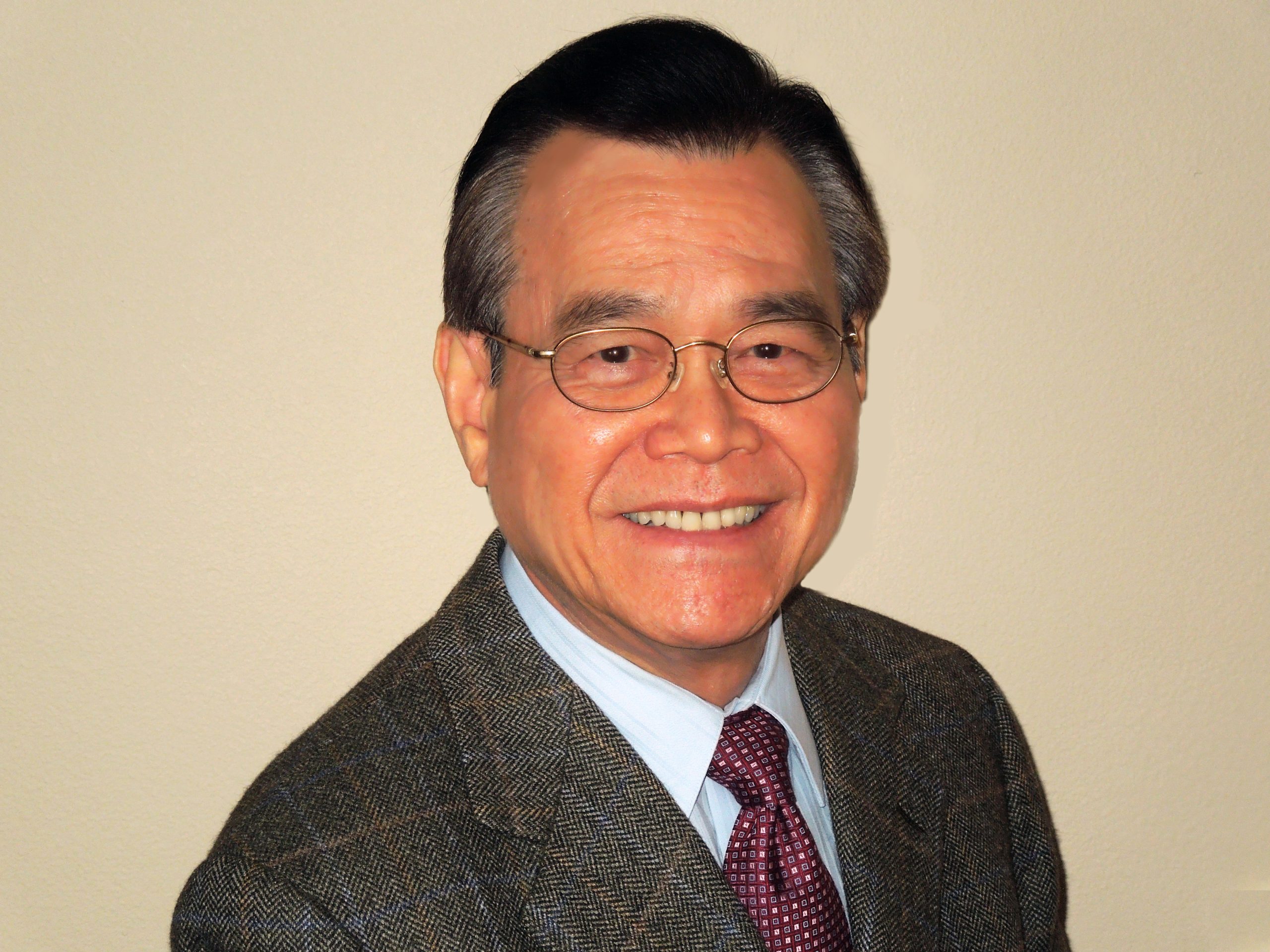 As the founder of Lam Research Corporation, Dr. Lam is an entrepreneurial legend in Silicon Valley. As its first CEO, he guided the successful development and launch of his eponymous company’s plasma etch system, a critical production equipment in the 1980s that ushered the “submicron” era in chip-making. In 1984, he became the first Asian-American CEO to take a company public on the NASDAQ exchange.

Dr. Lam continues to leverage his experience, expertise, and network to assist other high technology enterprises, serving as director and guiding young ventures to successful outcomes. He currently devotes most of his time to Multibeam Corporation, a world leader in Multicolumn Electron-Beam Lithography (MEBL) technology. As its Chairman & CEO, Dr. Lam has led Multibeam to transform its technology into equipment for use in production fabs and guided the development of unique applications at industry inflections. Among the benefits enabled by the MEBL system are: dramatic cost reduction for low-volume IC production with no use of masks; inscribing, i.e., hardcoding, chip-specific information inside each IC during fabrication to combat IC counterfeiting; low-cost production of large-format interposers for advanced packaging; and other emerging applications.

Dr. Lam earned Doctoral and Master degrees in chemical engineering from M.I.T. as well as a Bachelor degree in engineering physics from the University of Toronto. Widely recognized by his peers as a key contributor to the growth of the semiconductor industry, he was inducted into the Silicon Valley Engineering Hall of Fame in 2013. 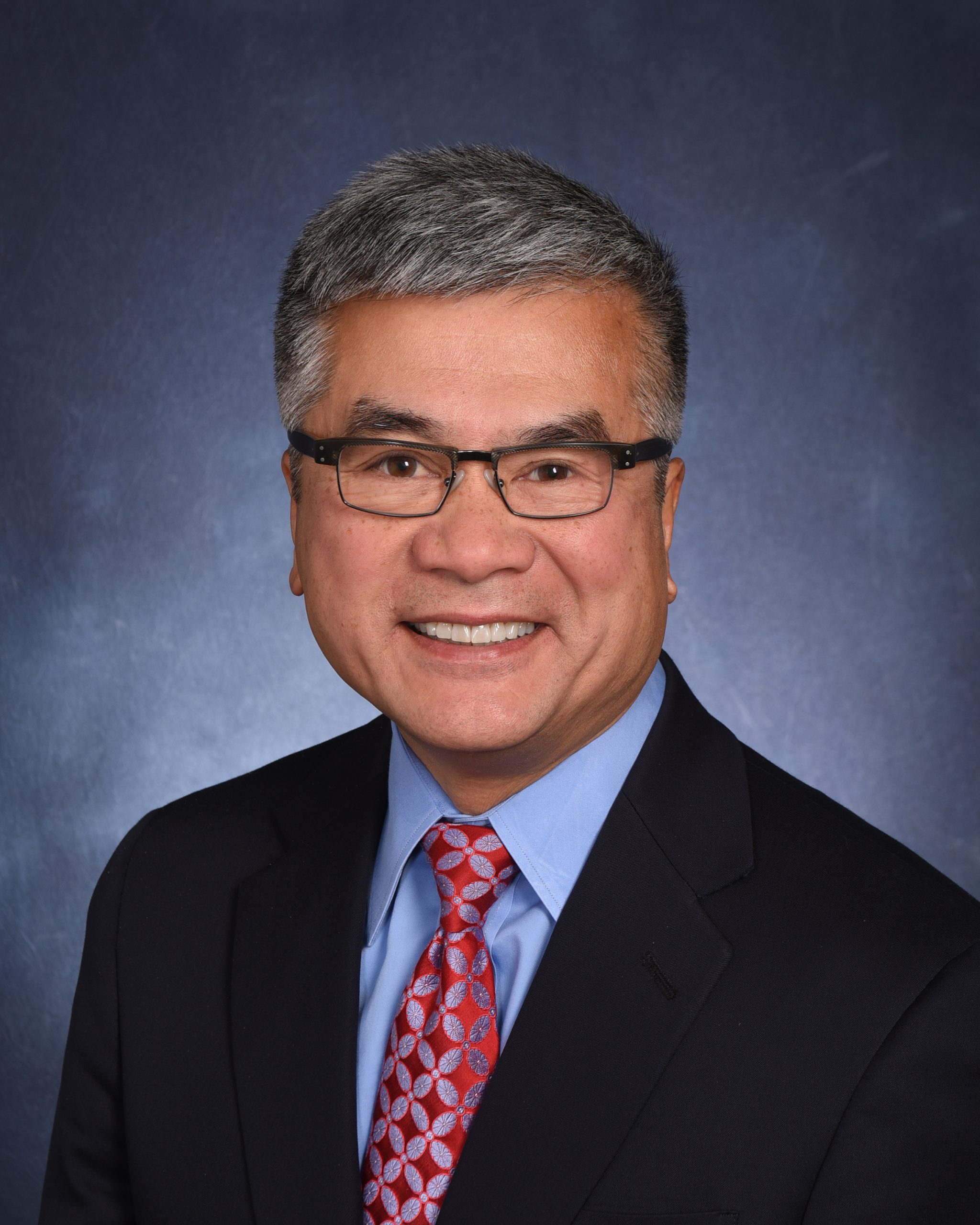 As Governor of Washington State (the first Chinese American to be elected governor in United States history and the first Asian American governor on the mainland), U.S. Secretary of Commerce, and most recently as America’s envoy to China, Hon. Locke has been a leader in the areas of education, employment, trade, health care, human rights, immigration reform, privacy, and the environment. Hon. Locke currently serves as the President of Bellevue College in Bellevue, Washington.

As Washington’s 21st Governor from 1997-2005, the nation’s most trade dependent state, Hon. Locke increased exports of Washington State products and services by leading trade missions to Mexico, Europe, and Asia, more than doubling the state’s exports to China. As U.S. Secretary of Commerce from 2009-2011, he led President Obama’s National Export Initiative to double American exports in five years; assumed a troubled 2010 Census process but which under his active supervision ended on time and substantially under budget, saving taxpayers $2 billion; and achieved the most significant reduction in patent application processing in the agency’s history: from 40 months down to one year. As U.S. Ambassador to China from 2011-2014, he opened markets for made-in-USA goods and services; reduced wait times for visa interviews of Chinese applicants from 100 days to 3 days; and through the Embassy’s air quality monitoring program, exposed the severity of the air pollution in China, causing the Chinese people to demand action by the government and the government in turn beginning to address the issue. 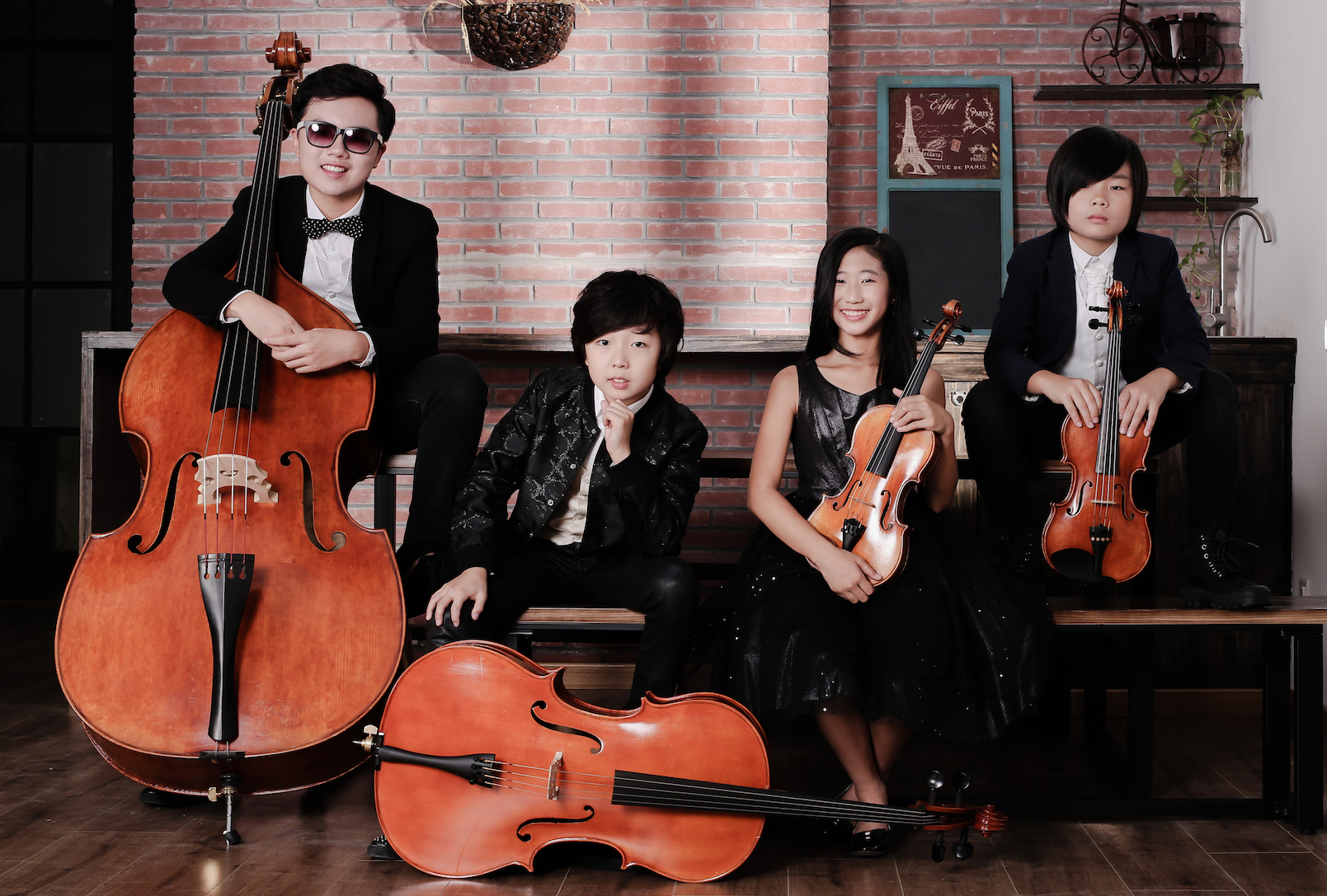 Besides TV appearances, the group has performed at major concert venues, including Carnegie Hall, Lincoln Center, and Citi Field. And they already have garnered a robust social media following, with millions of youtube views and followers.

Mixing an eclectic repertoire, the Ensemble performs from traditional classical music to today’s pop hits and mash-ups – innovatively orchestrated and arranged to give the audience a unique listening experience. Despite their youthful age, the group is a model of mature and brilliant musicianship.

• One preferred table for 10