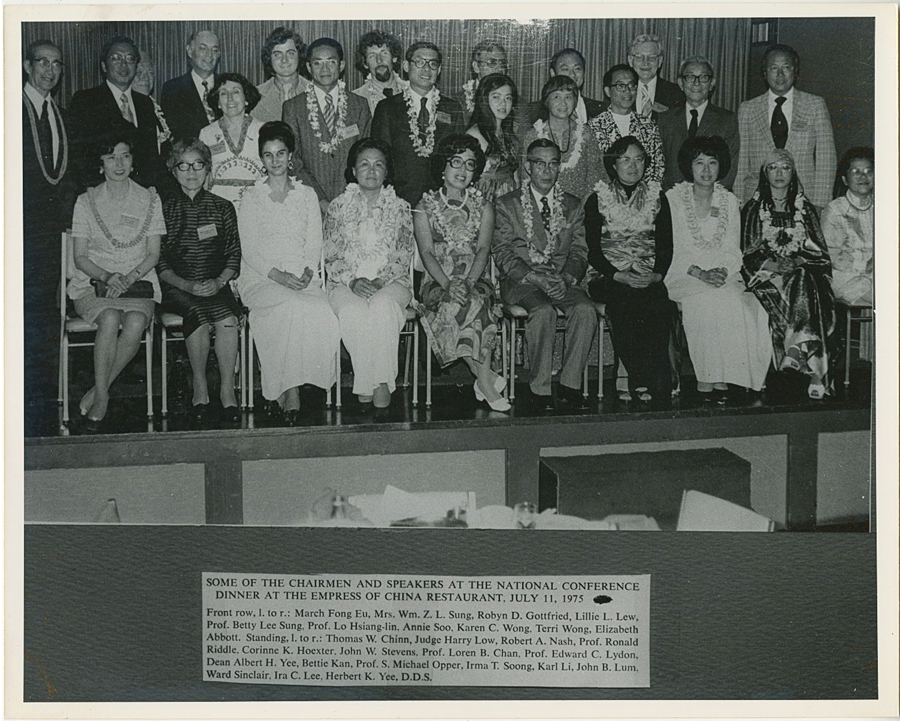 This photograph captures Dr. Betty Lee Sung (seated front and center) at the very first national conference for scholars in the then nascent field of Chinese American Studies. It was organized by the Chinese Historical Society of America and held in San Francisco from July 10-12, 1975. Dr. Sung pioneered the first course and program in Asian American Studies on the east coast at City College in 1970. The program grew out of activism and demands for ethnic studies by Chinese American and other students of color that challenged the university’s Eurocentric education, and drew on Dr. Sung’s seminal book on the history of Chinese in America, Mountain of Gold. Published in 1967, this first book on Chinese American history written by a Chinese American filled a knowledge vacuum and was the product of a decade of Dr. Sung’s own research and travels across the country to interview Chinese Americans for a show on Voice of America dedicated to this community. At the time, there were few sources from the perspective of Chinese Americans, and the content for both the VOA programming and City College’s program of study had to be researched and built from the ground up.

A laundryman and paper son’s daughter, Dr. Sung broke ceilings by being one of the few Chinese American women with limited means to graduate from college. She at times cleaned houses to pay for her room and board because her father disowned her for attending college rather than marrying. In addition to conducting more than four decades of painstaking sociological research within Chinese American communities, Dr. Sung has been involved in important Asian American archiving efforts. She pushed for the creation of an Asian American Collection within the Library of Congress to ensure that those with the power to legislate could be informed by sources from the community. She has also donated her personal and academic papers to MOCA, some contents of which are highlighted here. In the second photograph, Dr. Sung is standing alongside civil rights and labor activists A. Philip Randolph, Bayard Rustin, and Ernest Green (one of the Little Rock Nine). They were fellow participants in the 8th annual conference of the AFL-CIO Civil Rights Department’s Recruitment and Training Program held in March of 1976. Dr. Sung was probably brought here by her work on her award-winning book, A Survey of Chinese American Manpower and Employment, funded by a three-year grant from the U.S. Department of Labor and published in January of that year. The Chinese American Times cover story from October 1968 reports on Dr. Sung’s WNYC interview with NYC Human Rights Commission Chairman William H. Booth on the occasion of her publishing her groundbreaking new work, Mountain of Gold. 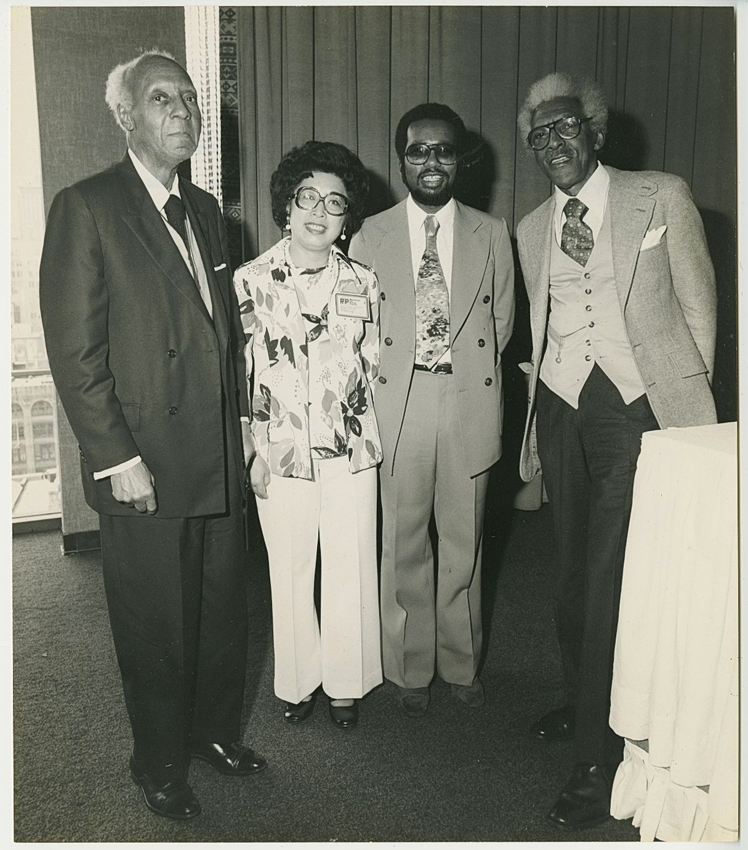 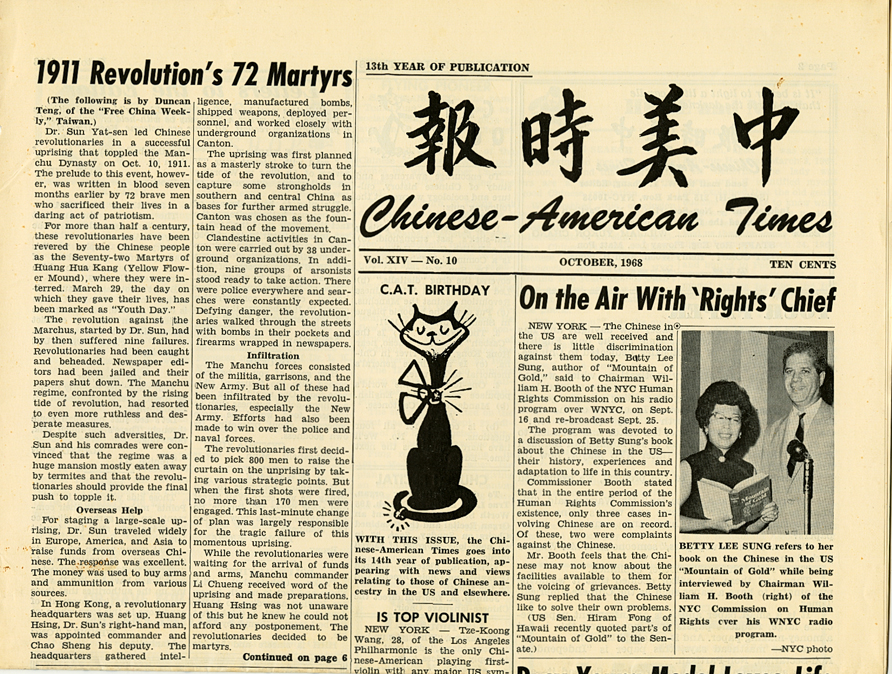 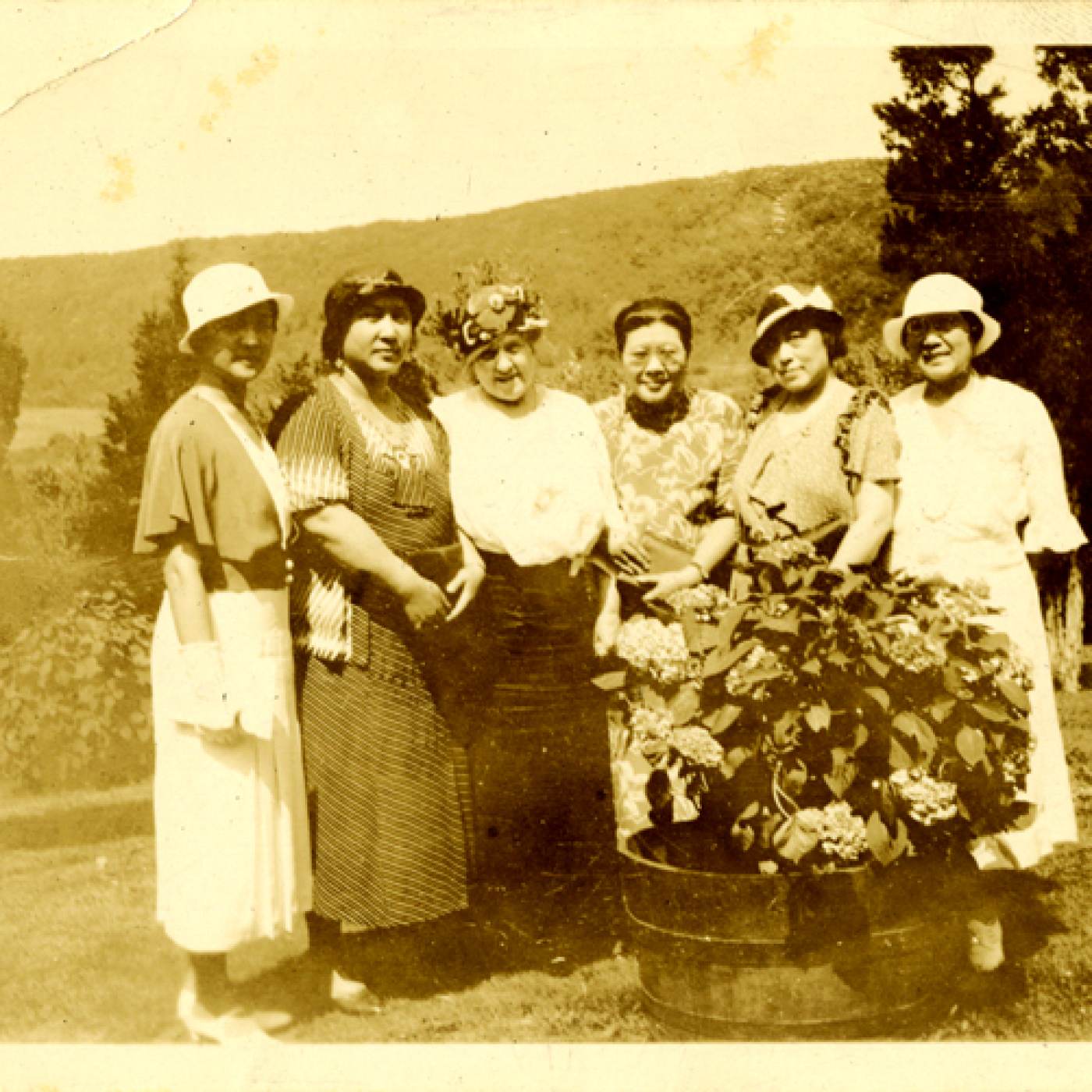