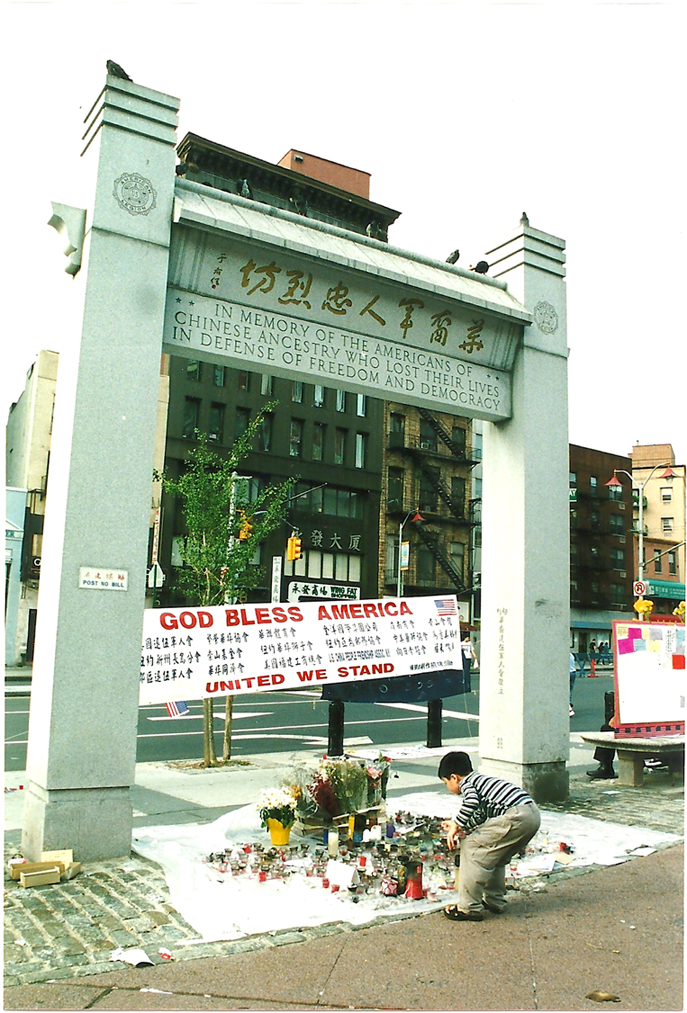 Not long after the tragic events of September 11th, MOCA began collecting community photo-documentation, studies, reports, artwork, and ephemera related to its impact on Chinatown, a neighborhood just ten blocks from Ground Zero. In solemn (belated) remembrance, we offer a few photograph and poem submissions from MOCA’s Recovering Chinatown: The 9/11 Collection which document and reflect on this day and the ones following.

The second photograph, taken by Lia Chang, shows people using the portable payphone trailers that Verizon set up at 27 locations around Chinatown beginning on September 21, 2001. As a result of the September 11th attack, telephone service in the general area south of East Broadway was disrupted for nearly two months. This lack of phone service affected the ability of businesses to conduct daily operations, such as processing garment orders, restaurant take-out orders, medical prescriptions, and credit card transactions. As of October 15th, telephone service was still not completely restored on some major Chinatown streets. Due to their proximity to many of the key federal, state and city offices, various streets were completely or partially shut down repeatedly by authorities, particularly when the federal government issued terror warnings. During this period, Chinatown was in a state of siege. Barricades were erected, manned by the NYPD, New York State troopers, and National Guard. One such barricade south of Canal Street is shown in photograph 3. In oral histories, garment workers spoke about how the inability of vehicles to get in and out of Chinatown all but shut down the factories, leaving them without work and a pay check for weeks and in some cases months. The garment industry, a mainstay of many families’ livelihood, would never fully recover. Debris diminished air quality, covering shops in dust from the collapsed towers and causing some to wear protective goggles and masks. In the days following, family members posted flyers on makeshift missing person walls outside Mount Sinai Medical Center near Chinatown, and the community hung American flags and came together in candlelight vigils to mourn the members who were lost. 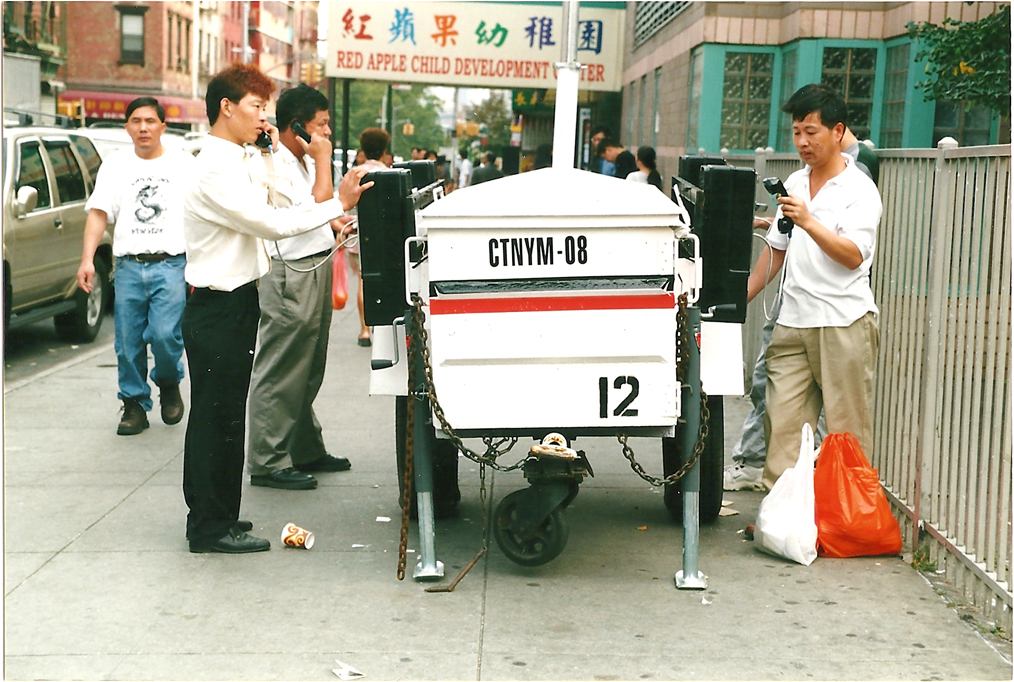 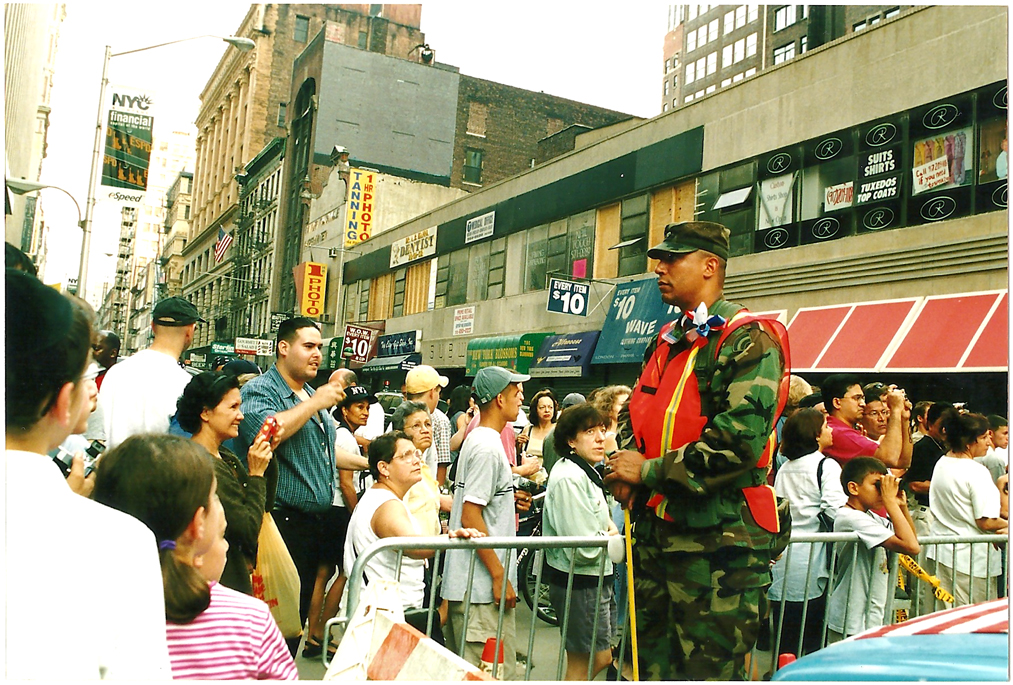 2002.014.031 In the three months after September 11th, Chinatown was in a state of siege. Barricades were erected, limiting vehicle and pedestrian access into and out of Chinatown and making the transport of supplies and regular conducting of business all but impossible. This barricade was set up south of Canal Street. Photograph taken by Lia Chang, Museum of Chinese in America (MOCA) Recovering Chinatown: 9/11 Collection. 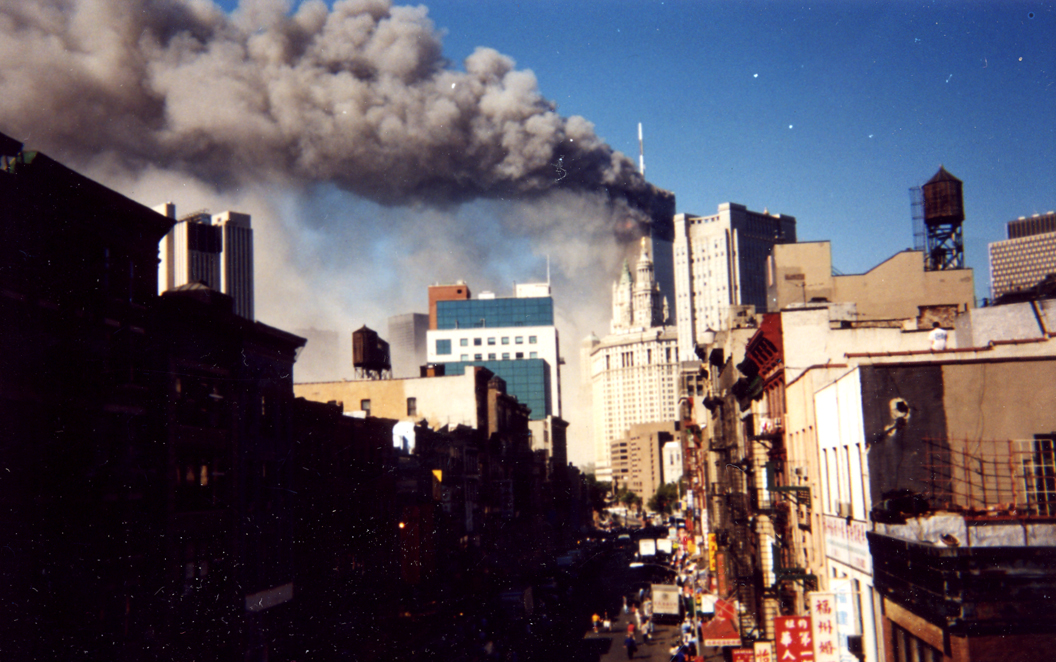 2002.013.002 A photograph of East Broadway taken from the Manhattan Bridge Walkway just before the 2nd tower fell on September 11, 2001 that captures the tons of dust and debris that blew into Chinatown that day. Photograph taken by Wai Lum William Man, Museum of Chinese in America (MOCA) Recovering Chinatown: 9/11 Collection. 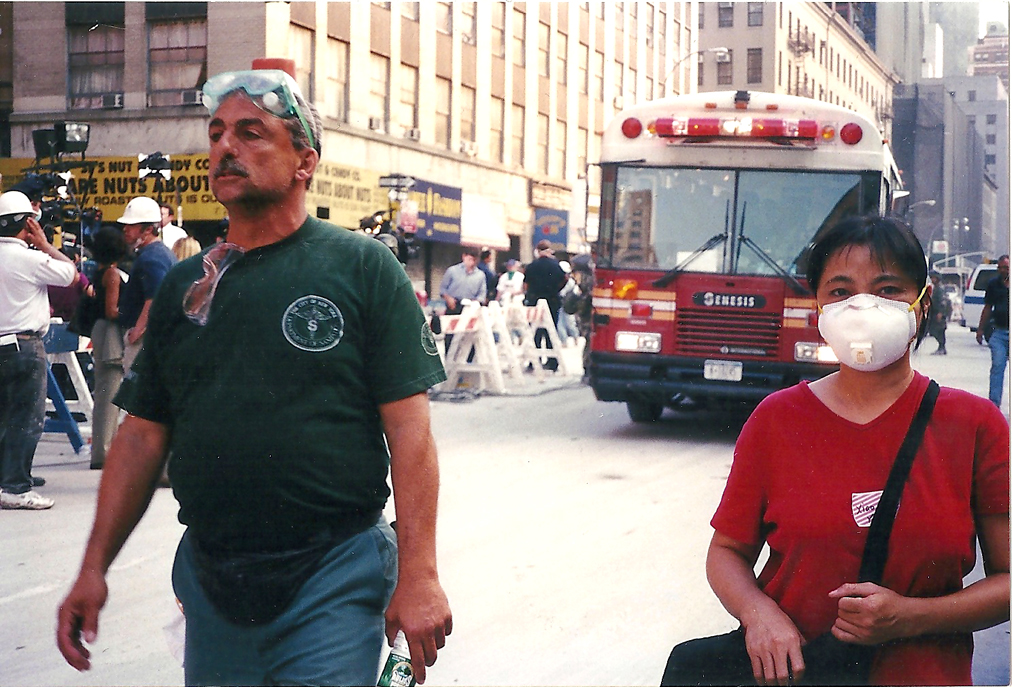 2002.022.005 A man with goggles and woman wearing a mask due to poor air quality from the towers’ dust and debris. The woman could be Xiao Min Yu. Photograph taken by Xiao Min Yu, Museum of Chinese in America (MOCA) Recovering Chinatown: 9/11 Collection. 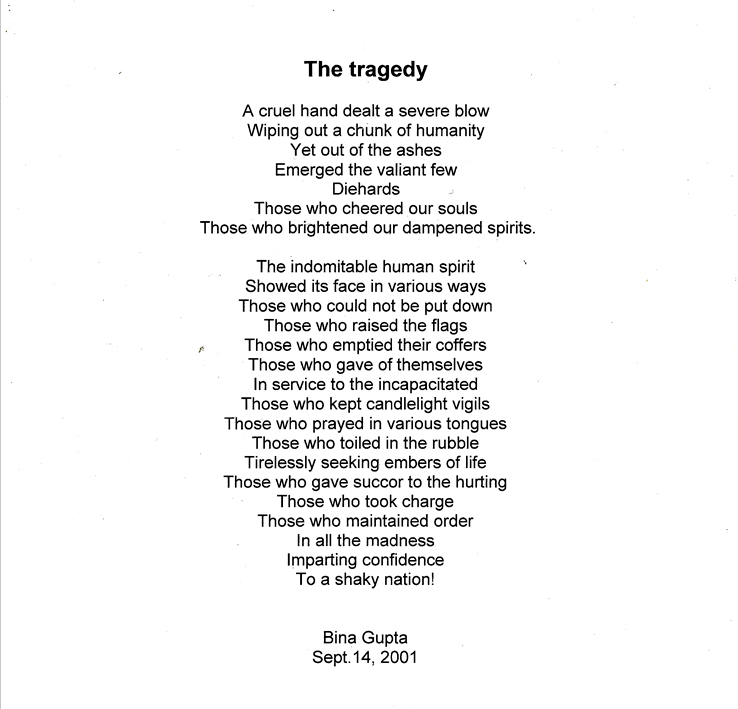 2011.035.001 Poem titled “The Tragedy” written by Bina Gupta in response to 9/11 attack on the World Trade Center. Courtesy of Bina Gupta, Museum of Chinese in America (MOCA) Recovering Chinatown: 9/11 Collection. 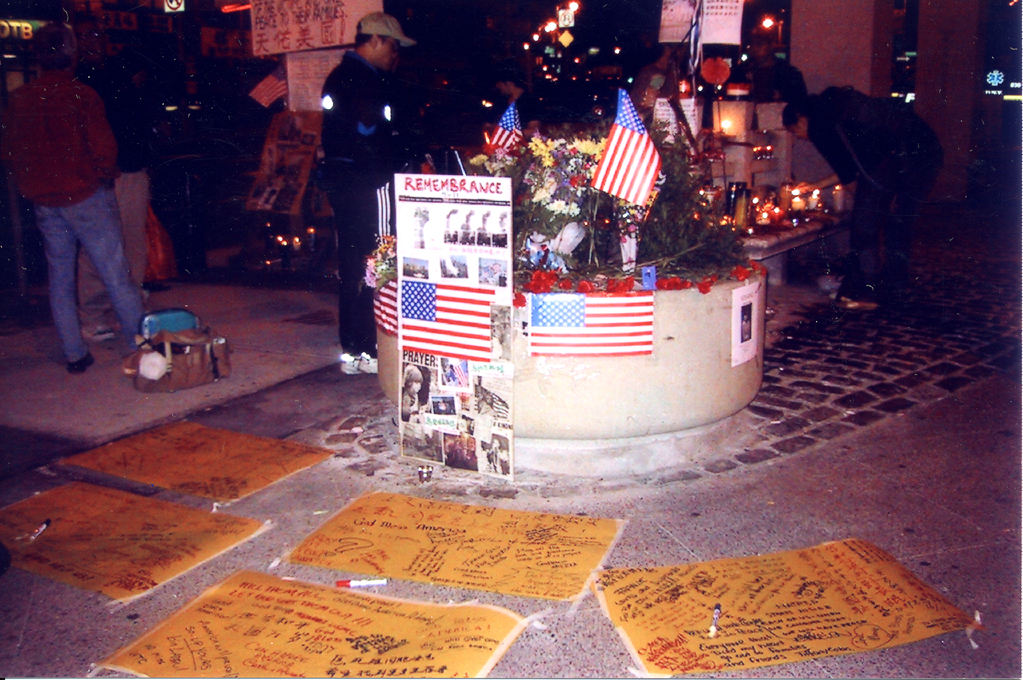 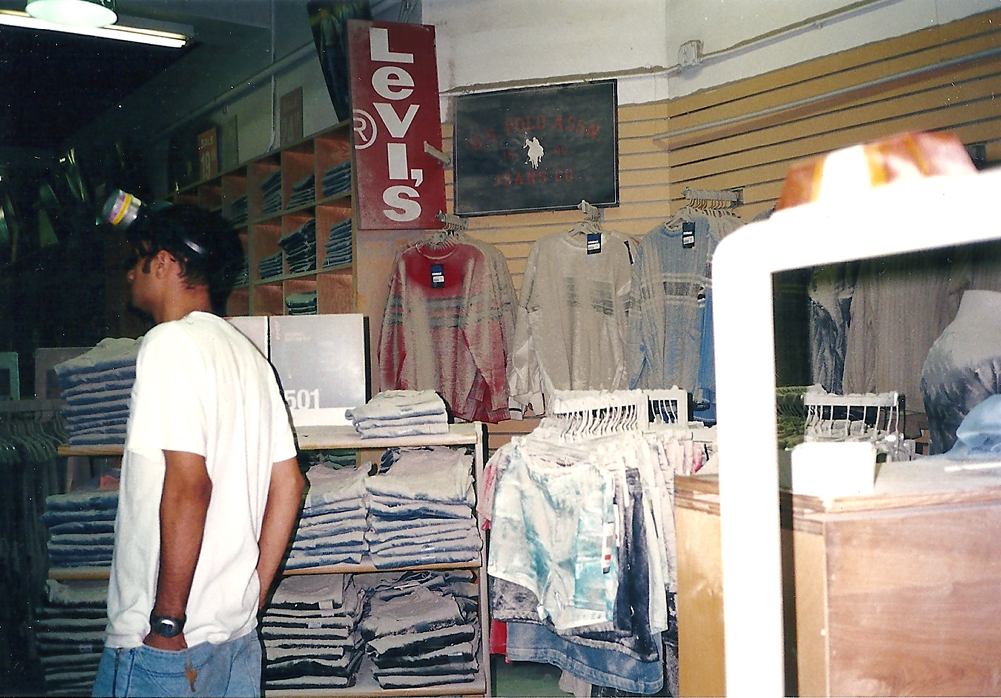 2002.022.007 Interior of a clothing store covered in dust and debris from the collapsing towers. Photograph taken by Xiao Min Yu, Museum of Chinese in America (MOCA) Recovering Chinatown: 9/11 Collection. 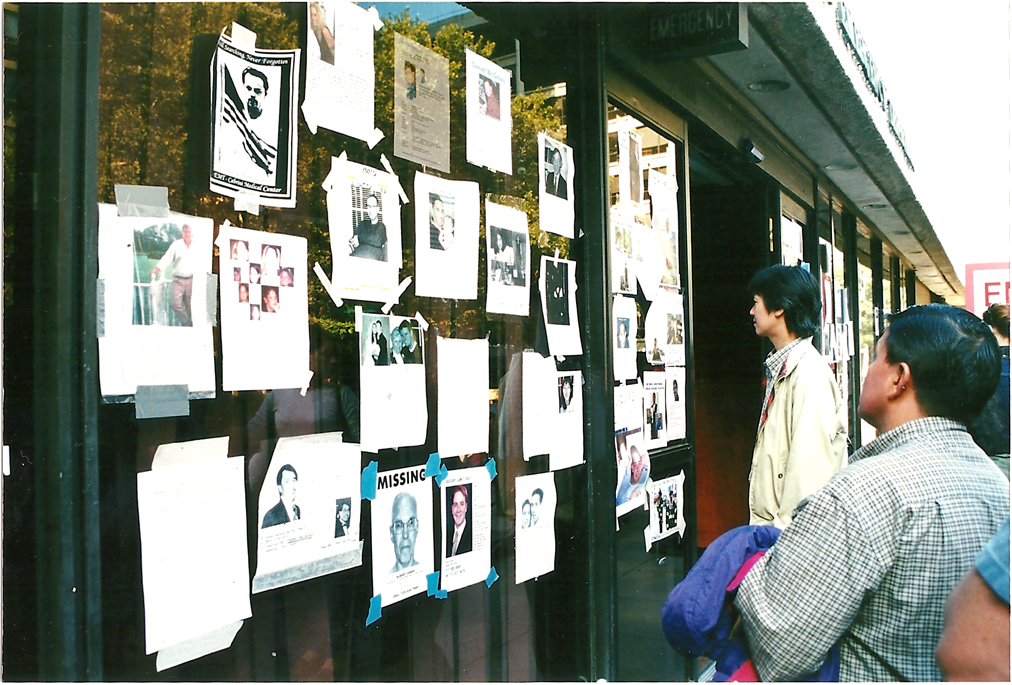 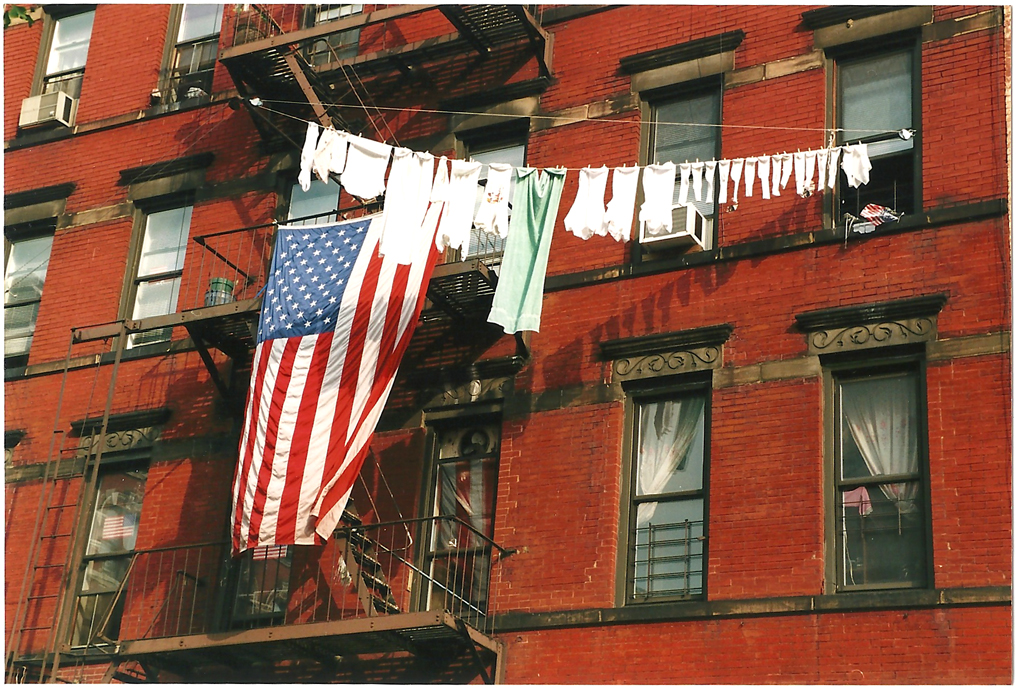