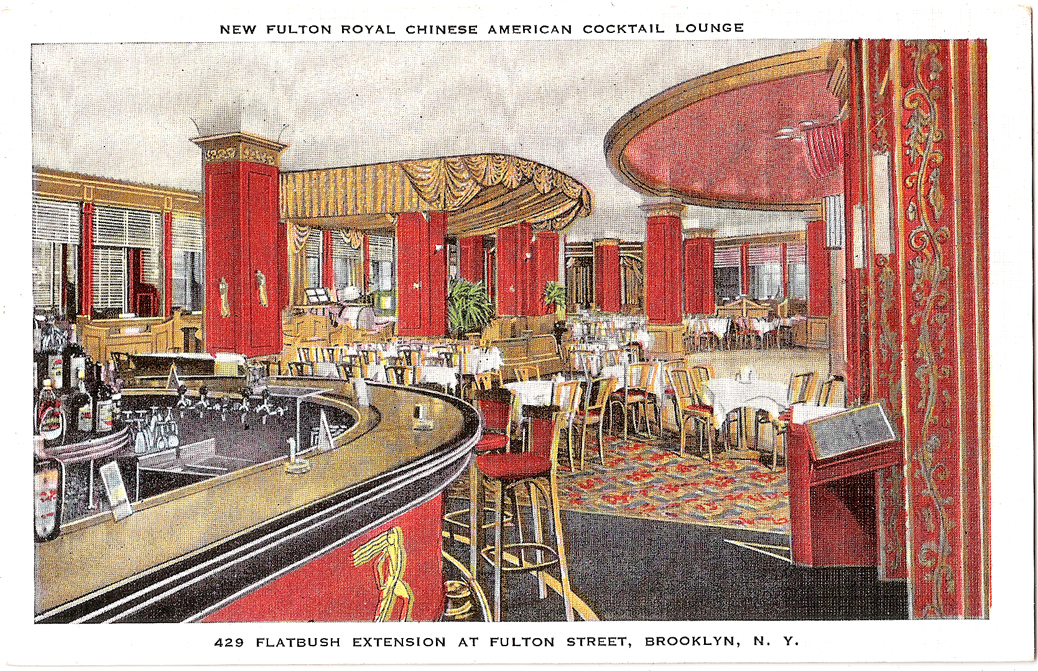 2015.043.351-a This postcard depicts the interior of New Fulton Royal Chinese American Cocktail Lounge. A horseshoe-shaped bar, red columns and dining tables surrounding a dance floor. The New Fulton was one of a number which chose to advertise and describe themselves in name as a Chinese American rather than Chinese restaurant during WWII and in the two decades after. Courtesy of Eric Y. Ng, Museum of Chinese in America (MOCA) Collection.

In honor of this year’s marking of the 161st anniversary of American postcards and this past World Postcard Day, we share a few postcards from MOCA’s collection. Dating from the 1900s to 1960s, they offer a glimpse into previous generations’ pre-social media social network. At the peak of the worldwide postcard craze at the beginning of the 20th century, billions were sent around the world each year. By 1913, nearly a billion were mailed in the U.S. alone, and countless millions more collected in family albums. Much like the social media of today, the exchange of postcards as a dual visual and written medium let people stay in touch and communicate news and events, share photos, mark important events, signal group affiliation and support for various political causes, and document and tell others about the cool places they had traveled and amazing food they had eaten.

The following historical postcards show some of the ways that Chinese in America participated in this social network. Before television and Instagram, restaurants such as Yat Bun Sing in Chinatown advertised themselves by giving out free postcards for patrons to mail to friends. The sent postcards might then be circulated among recipients and their social circle, and in this way, new potential diners could be introduced to the restaurant. The above postcard advertising the New Fulton Royal Chinese American Cocktail Lounge in Brooklyn was addressed by Flo. Lorenz at 34 Halsey Street in Brooklyn to a Ruth Scriber in Albany, New York, giving some indication of how ads of this sender’s local restaurant circulated within her social network. With the invention of Kodak’s postcard camera, people could easily create postcards out of their photographs. These were sometimes mailed, sometimes given directly to friends or family members and preserved in albums, such as that of Helen Typond, which contained among others the real-photo postcard of the little girl wearing the giant hair bow. Other postcards shown here include those that commemorate a Defending Democracy Parade in New York Chinatown in 1942, the appointment of Dr. C.C. Wu as Chinese Minister to Washington in 1928, the 64th Annual Convention of the On Leong Chinese Merchants Association, and a Boy Scouts delegation visit from China to New York. 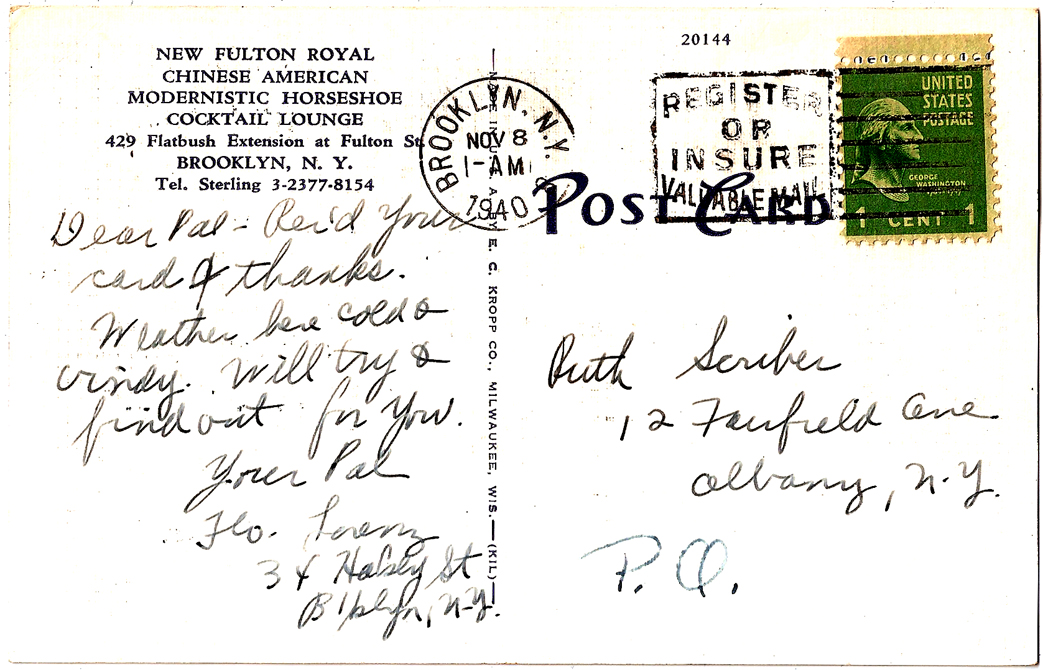 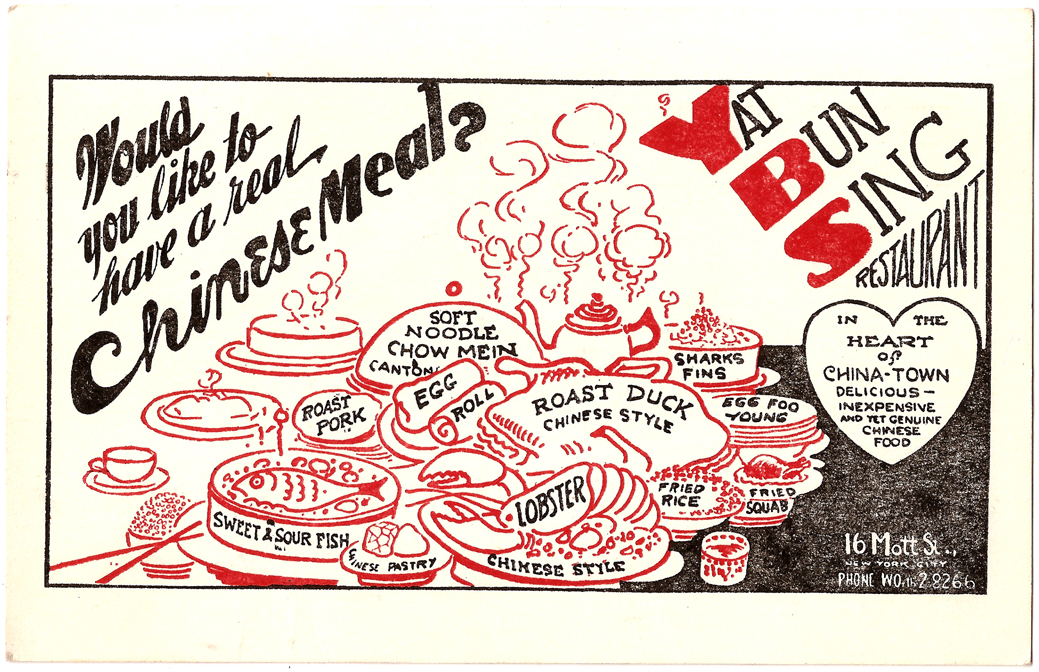 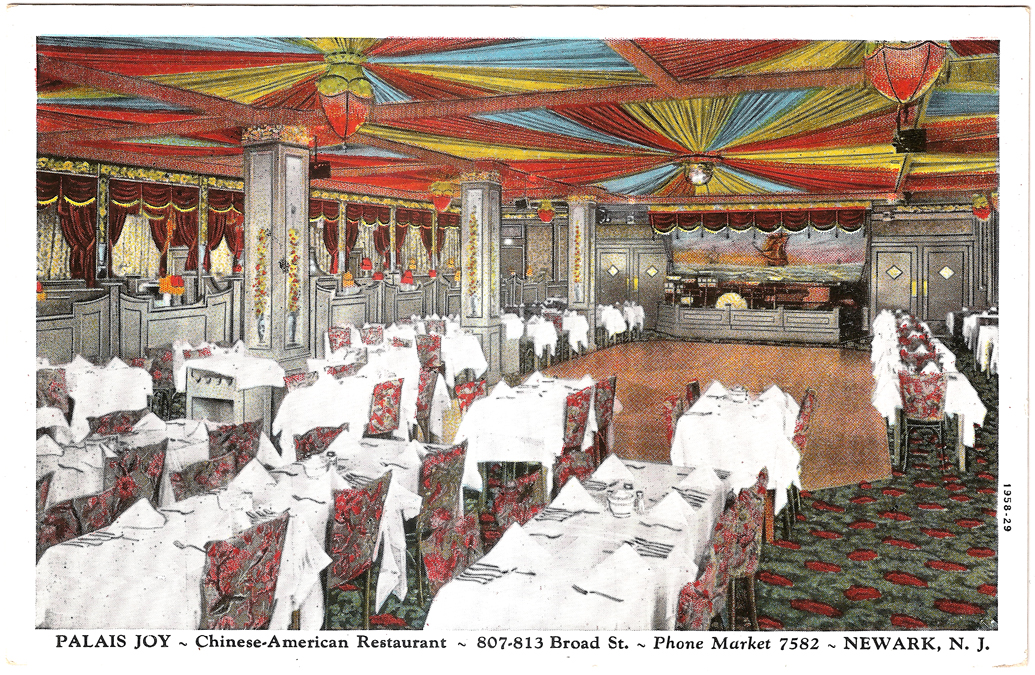 2015.043.139 This postcard depicts the rainbow ceiling interior of the Palais Joy Chinese-American Restaurant on 807-813 Broad Street in Newark, NJ. Tables are set with folded napkins and silverware and surround a dance floor. The stage in front of the dance floor is set up with a piano and percussions set. Description on the back reads: “Palais Joy, located in the heart of Newark, is one of the largest and most beautiful Chinese-American Restaurants in the country, serving the best of food at most moderate prices. Broadway entertainment and the best orchestras in the country are furnished for dancing daily at noon and at night. There is no cover charge at any time.” Courtesy of Eric Y. Ng, Museum of Chinese in America (MOCA) Collection. 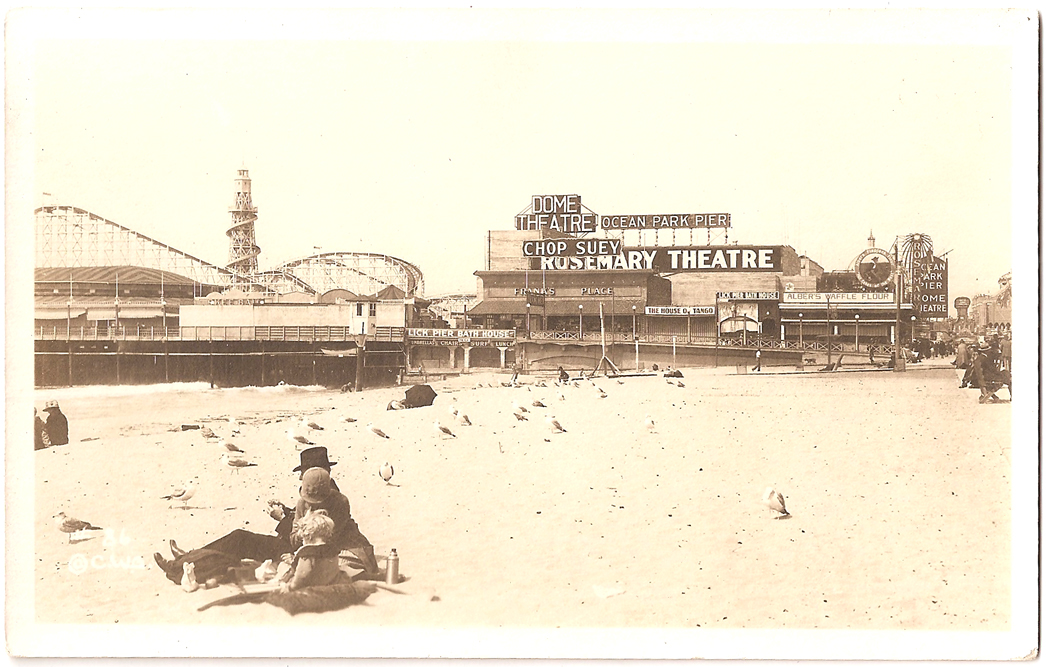 2015.043.341 This postcard may have been a souvenir collected from travel and shows a view from the beach where a family sits in the sand among seagulls. In the distance is the Dome Theatre and Rosemary Theatre at Ocean Park Pier in Santa Monica. Signs also advertise Lick Pier Bath House, Frank's Place, the House of Tango, Alder's Waffle Flour and Chop Suey. Courtesy of Eric Y. Ng, Museum of Chinese in America (MOCA) Collection. 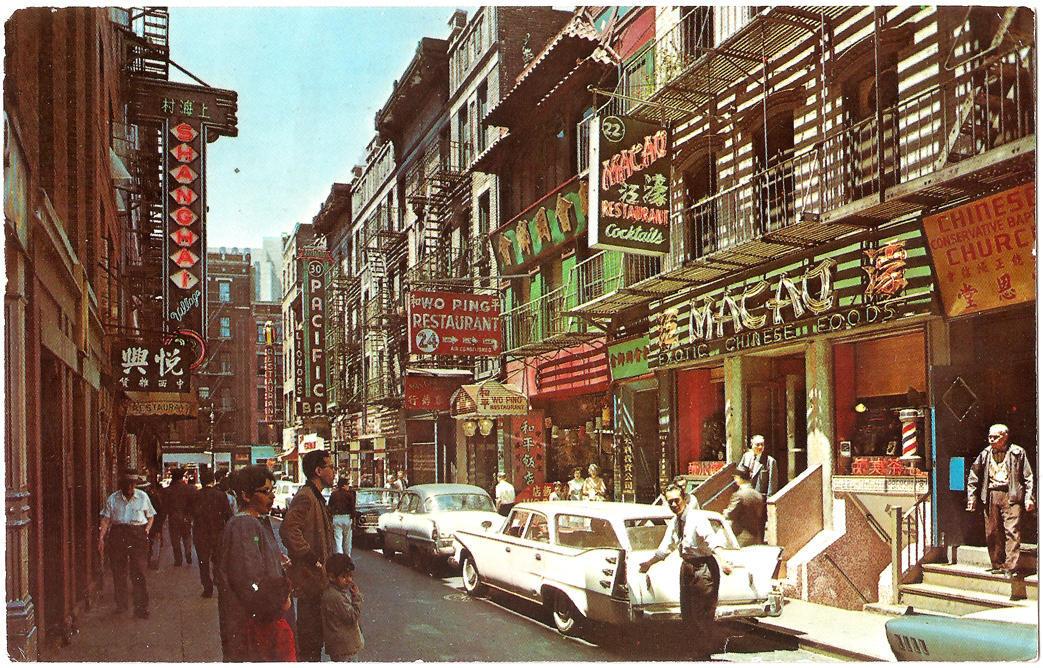 2015.043.336-a This postcard shows a view of Pell Street in 1968 with an assortment of restaurants and places including the Chinese Conservative Baptist Church, Macao Restaurant on 22 Pell, Shanghai Restaurant on 23 Pell, Wo Ping Restaurant on 24 Pell, and Pacific Restaurant on 30 Pell. There are people and now antique automobiles on the streets. Courtesy of Eric Y. Ng, Museum of Chinese in America (MOCA) Collection. 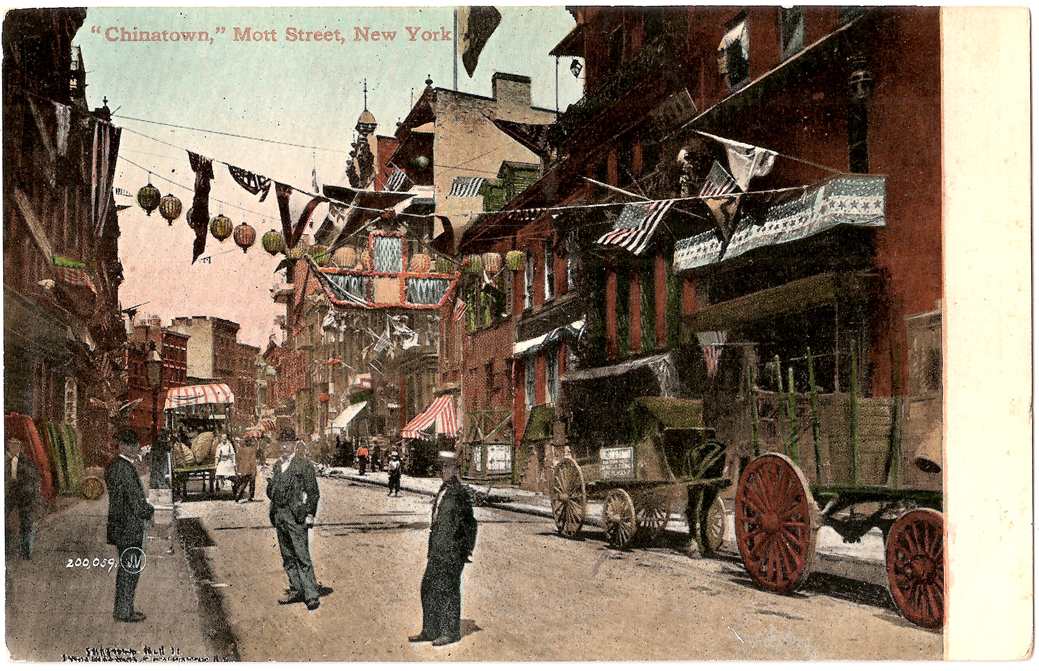 2015.043.186 The postcard illustration depicts a view of Mott Street in the late 1800s. There are American flags and lanterns hanging over the street. Wheeled carts are parked on the side of the street. Postcards such as this were sold in gift and souvenir shops in Chinatown, itself marketed as a tourist destination. Courtesy of Eric Y. Ng, Museum of Chinese in America (MOCA) Collection. 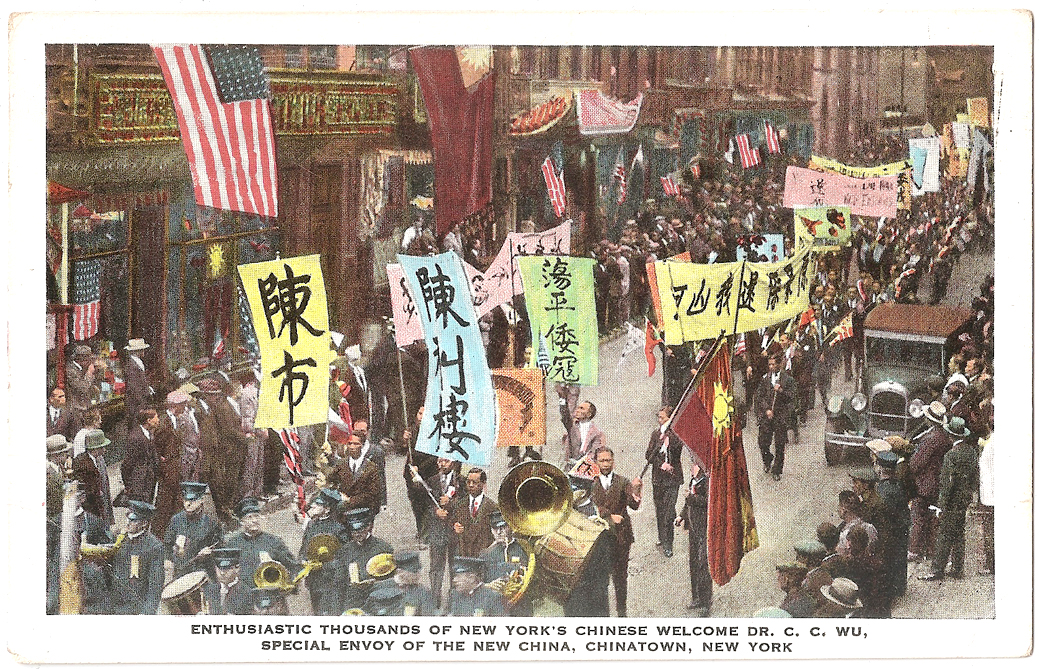 2015.043.340 This is a colored postcard showing a parade procession with marching bands, banners in Chinese, and men in uniform and suits welcoming Dr. C. C. Wu. These postcards were given out at the Chin Lee Restaurant in 1928 when Wu was sent by the Chinese nationalists to Washington as a special envoy of the New China. He was appointed Chinese minister of Washington in November 1928. His father was Wu Ting-Fang who in 1896 also served as Chinese minister to Washington. Courtesy of Eric Y. Ng, Museum of Chinese in America (MOCA) Collection. 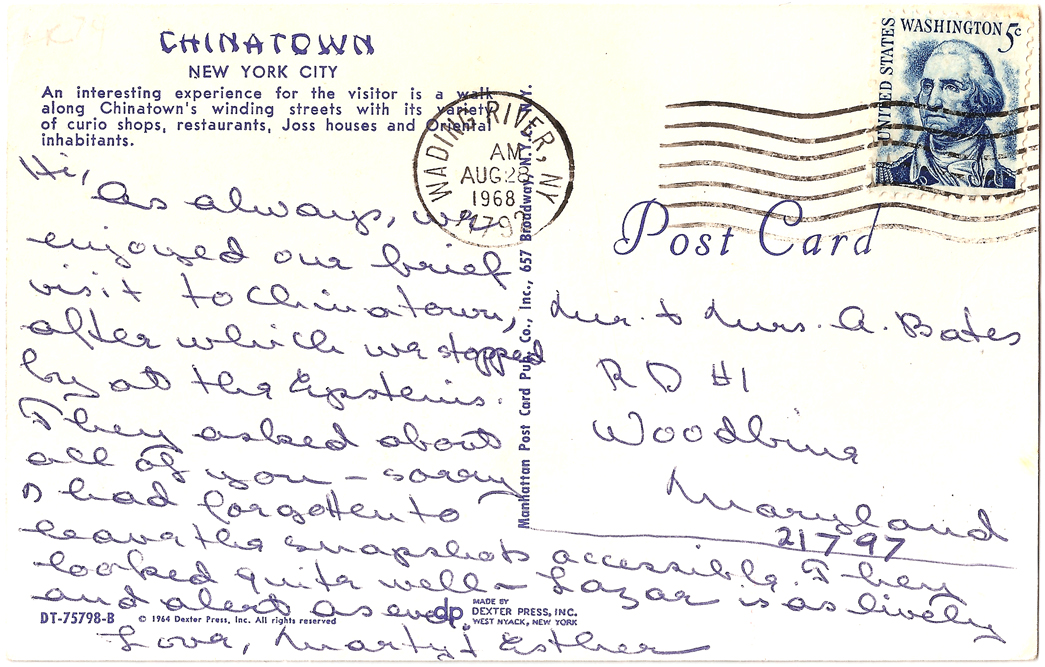 2015.043.336-b Handwriting on the back reads: “Hi, As always, we enjoyed our brief visit to Chinatown after which we stopped by at the Apsteins. They asked about all of you - sorry I had forgotten to leave the snapshots accessible. They looked quite well - Lazar is as lively and alert as ever. Love, Marty + Esther.” The Addressees are: Mr. + Mrs. A. Bates, Rd #1, Woodbine, Maryland 21797 Five cents George Washington postage stamp Postmarked Aug 28 1968, Wading River, N.Y. 11792 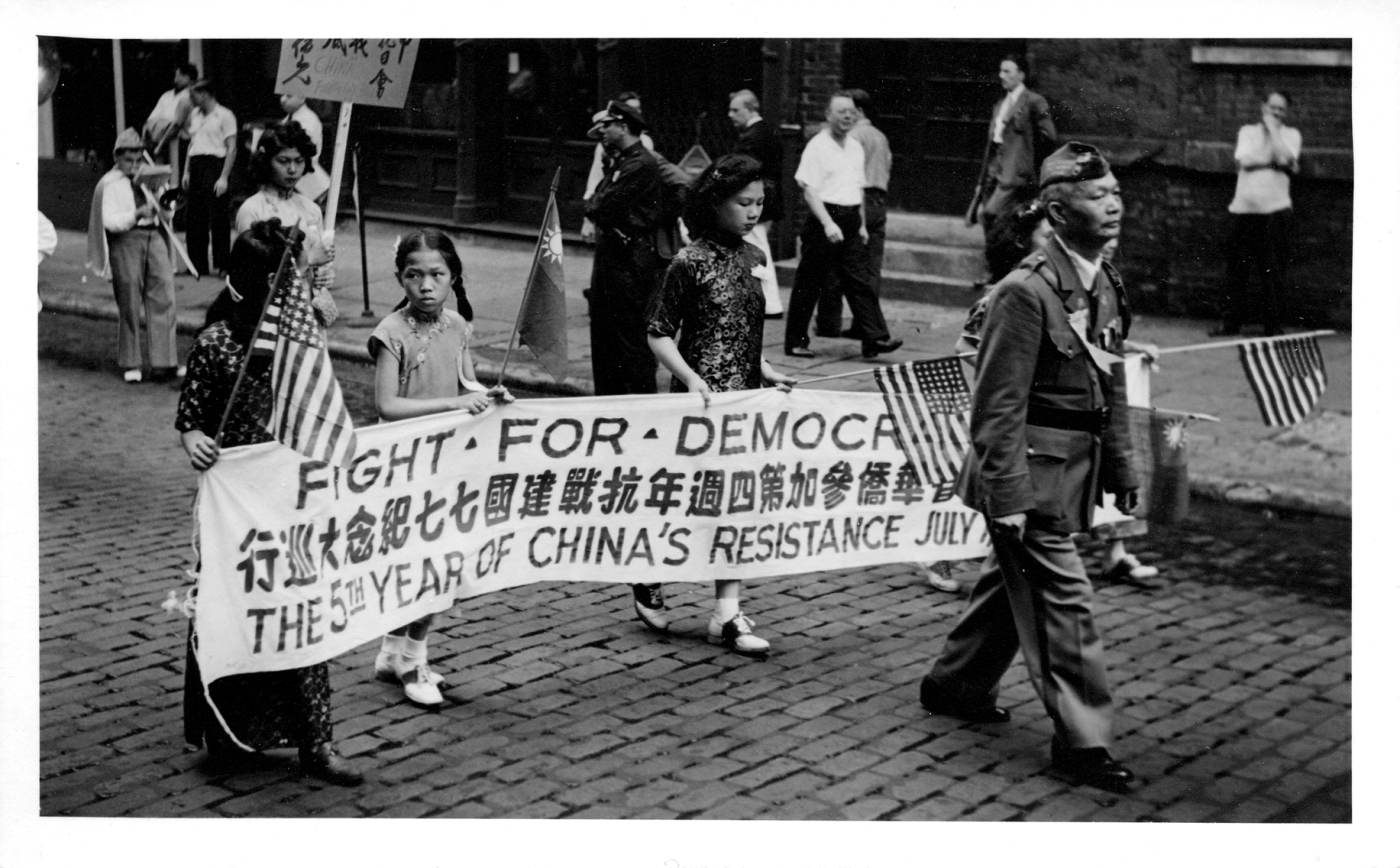 2009.032.007 This real-photo postcard is one of a series which shows marchers participating in a Defending Democracy Parade in Chinatown carrying a banner that reads “Fight for Democracy. The 5th Year of China's Resistance July—,” ca. 1942. Buying and collecting such postcards signaled support for the political cause and a desire to commemorate it. Museum of Chinese in America (MOCA) Postcard Collection. 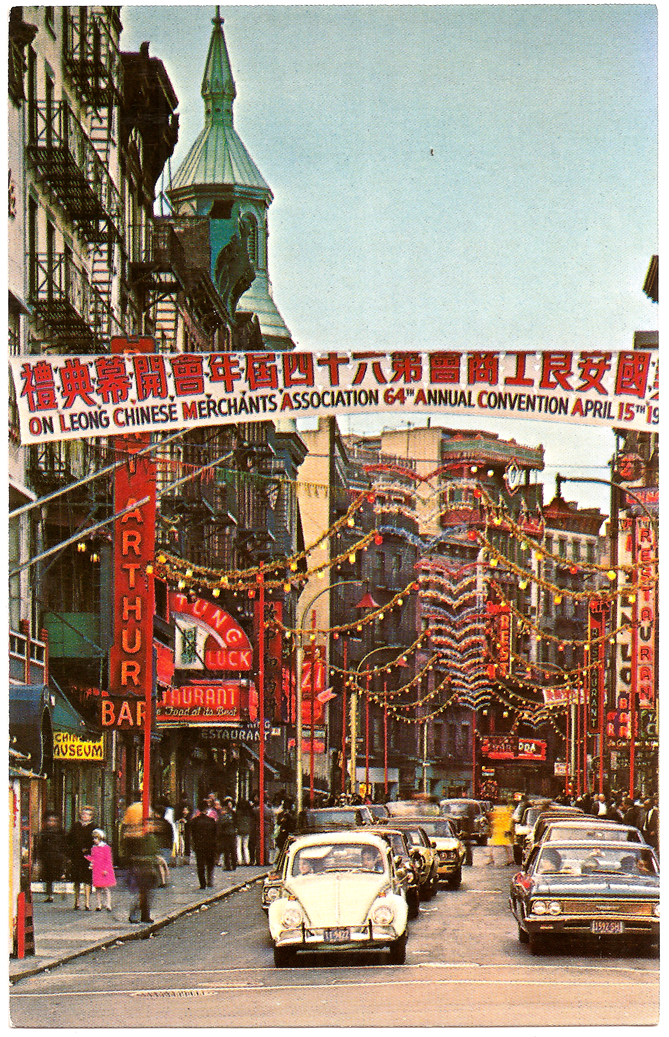 2015.043.222 This is a postcard of Mott Street decorated for the On Leong Chinese Merchants Association 64th Annual Convention with a banner in Chinese and English and lights. The convention took place on April 15, ca. 1960s. Visible business signs include Port Arthur, Chinese Museum, and Tung Luck Restaurant. The Church of Transfiguration is visible in the distance. Courtesy of Eric Y. Ng, Museum of Chinese in America (MOCA) Collection. 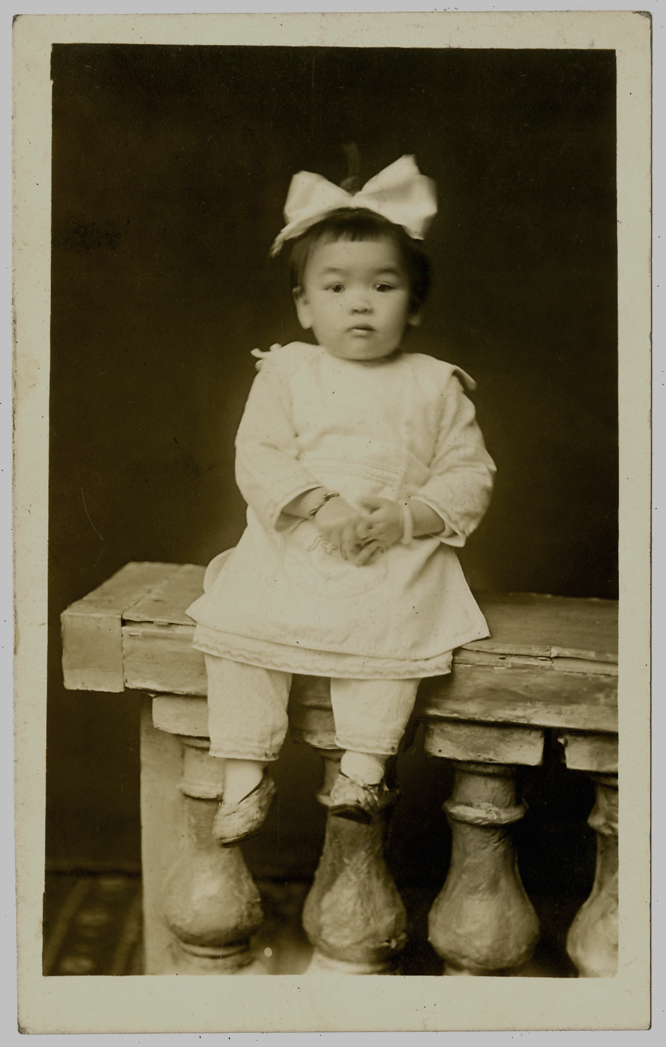 2015.037.633 This postcard belongs to the photo album made by Helen Moy Typond (2015.037.588). It is a real-photo postcard portrait of a girl wearing a giant hair bow, who is possibly related to Helen Moy Typond. Technology such as Kodak's 3A model camera made it relatively easy and inexpensive to print photographs unto postcard-size paper. These were sometimes mailed, sometimes given in person to family and friends, who kept them in family photo and postcard albums. Courtesy of Douglas J. Chu, Museum of Chinese in America (MOCA) Collection. 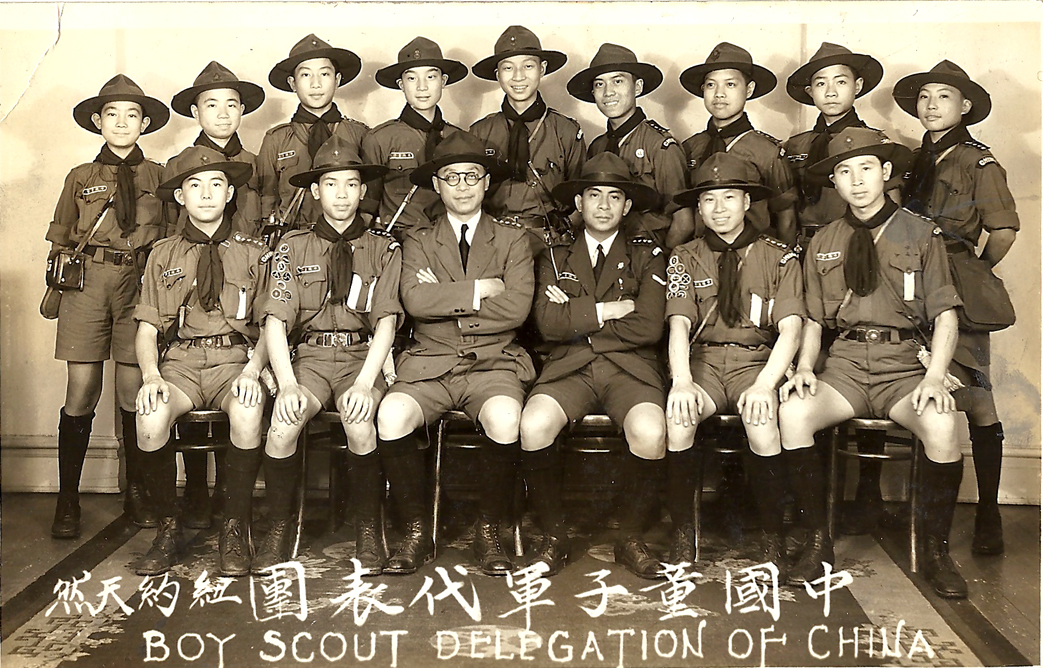 2010.007.036 A real-photo postcard with the Boy Scout Delegation of China pictured on the front. Courtesy of Marcella Dear, Museum of Chinese in America (MOCA) Collection.