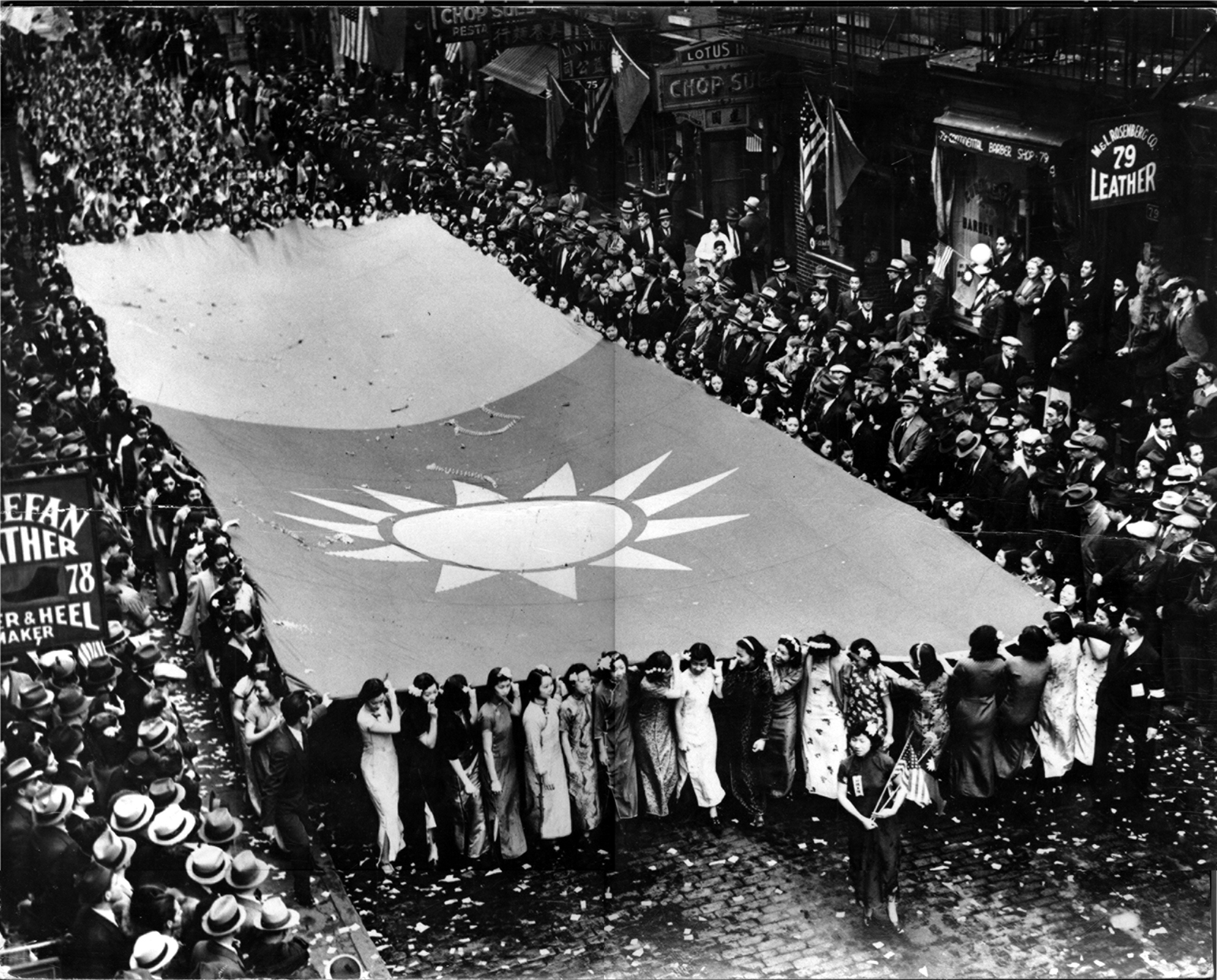 If you would like to make a contribution towards the conservation of this historical photograph, please click to navigate to MOCA’s Sponsor an Object Donate Page and be sure to type in “1938 Solidarity Day Parade Photograph” as the Object Name.

This May 10, 1938 photograph captured the dramatic and eye-catching spectacle of a reported one hundred young women garbed in Chinese cheongsam dresses carrying a giant 100 x 50 foot flag of the Chinese Republic through the streets of New York Chinatown. The women were participating in a community-wide “Solidarity Day” parade, in which some 15,000 turned out in a united front to protest against Japan’s invasion of China. To ensure the mass turnout, every Chinese-owned business in the city was closed, including some 1,500 laundries throughout Manhattan, and buses brought in several hundred residents from nearby Jersey City and Newark’s Chinatown. No Chinese newspaper published that day. Instead the day’s war news was broadcasted via loudspeaker to an entire community who had taken to the streets. In addition to heavy rain, press reported that “confetti streamed down from Chinatown’s windows” onto dancing lions, colorful floats, bands and drum and bugle corps. And though no appeal was made, spectators showered coins—“pennies to half dollars, and even dollar bills”—onto the flag as donation towards war relief. The women carried the reportedly 200-pound flag the first leg of a three-and-a-half-mile parade route that wound its way from Mott and Pell Streets to Canal, Broadway, South Ferry, Broad, and Nassau, back to Centre Street. They handed it off midway to one hundred young men who carried the flag the last leg as spectators and paraders alike patriotically “roared themselves hoarse.”

This iconic photograph, taken by Times Wide World Photos and published the next day in the New York Times, was exhibited in MOCA’s core exhibition in the “Allies and Enemies (1940-1950s)” section. A visually impactful image measuring 23 1/2 x 17 inches, it helped MOCA illustrate our narrative history of Chinese Americans’ wartime experiences, particularly those of the local Chinatown community and women. After display in the core exhibition, some people in the photo were recognized and identified by Sophia Chu: Annabelle Wong (4th from left), Ruth Chin (5th from left), Sophia Chu (6th from left), Jeaw Yee Wong (7th from left), and Grace Chu (9th from left). 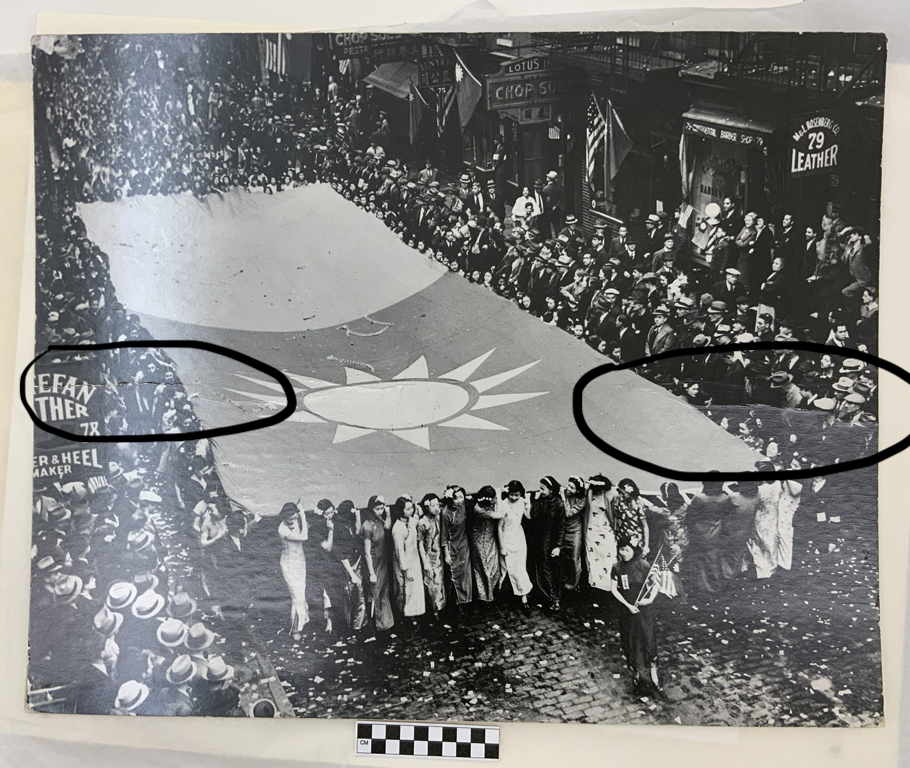 Condition post-fire. Please note the center creasing, which pre-dated the fire and conservation treatment would mend. 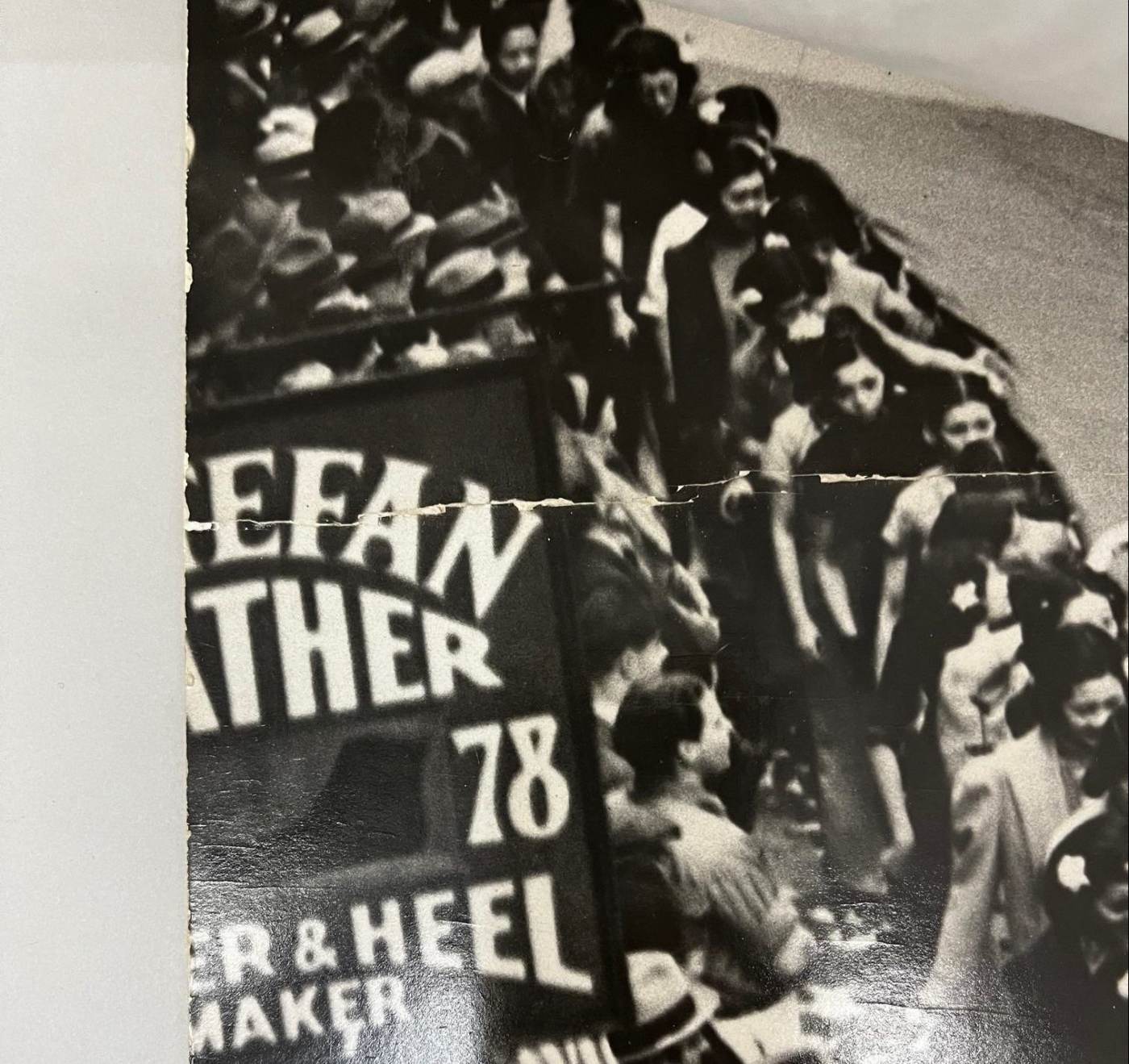 A close-up shot of the creasing along the center of the photograph. 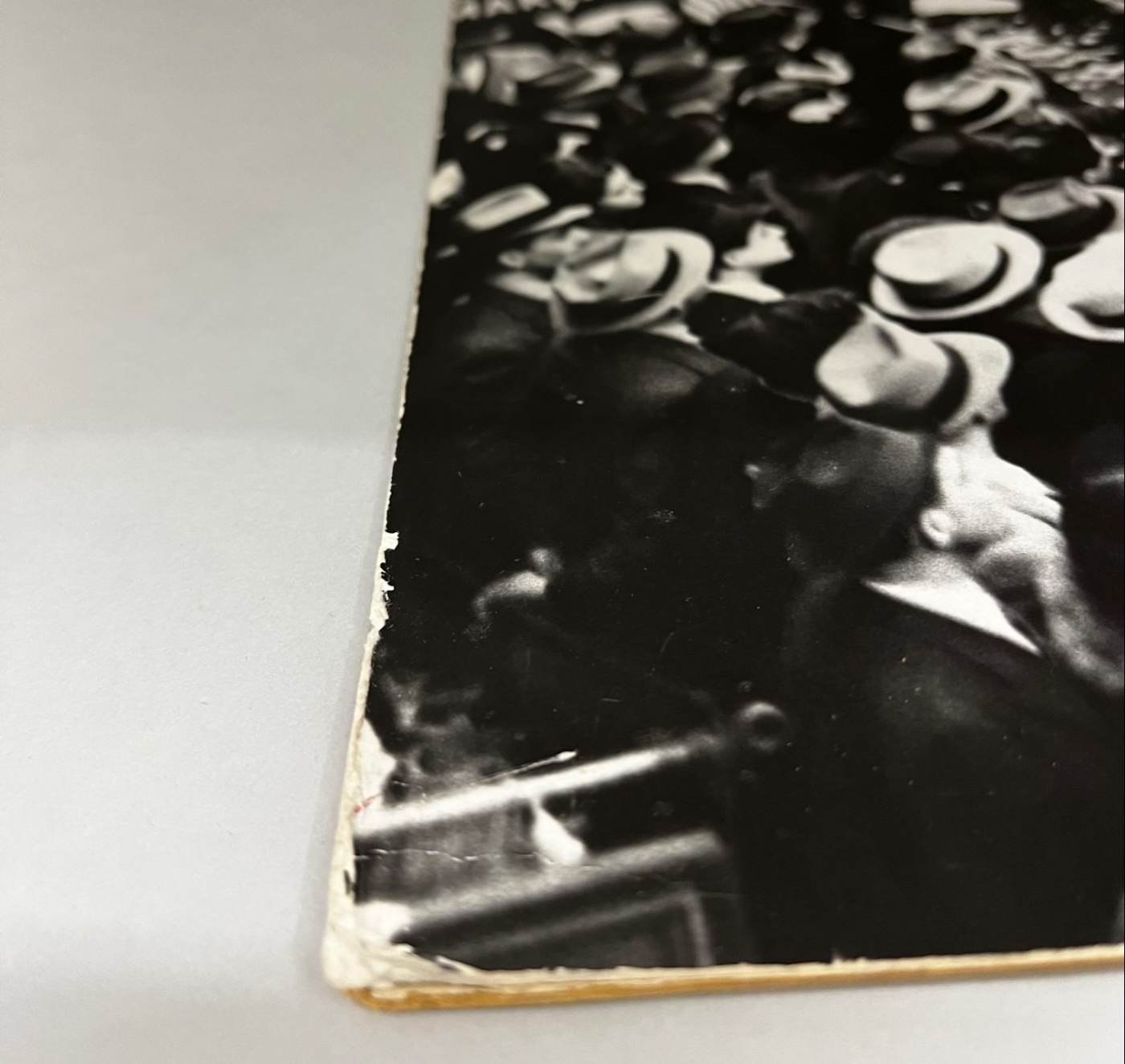 A close-up shot showing the edges and separating layers of the photograph. We would separate the acidic back layer from the photograph during treatment to ensure its long-term preservation.

This photograph has been mounted to an acidic board, which over time, will deteriorate and even damage the photograph itself. In the interest of the photograph’s long-term preservation, this acidic backing should be removed. Due to water from the sprinkler system set off by the fire, there has occurred a slight curling of the photo paper and board, and wear and tear to the edges of the photograph, where the different layers of paper are separating. A large horizontal crease runs along the center, which predates the fire. Mending this crease would improve the aesthetic quality of the photograph, which would enable us to display and re-digitize it.