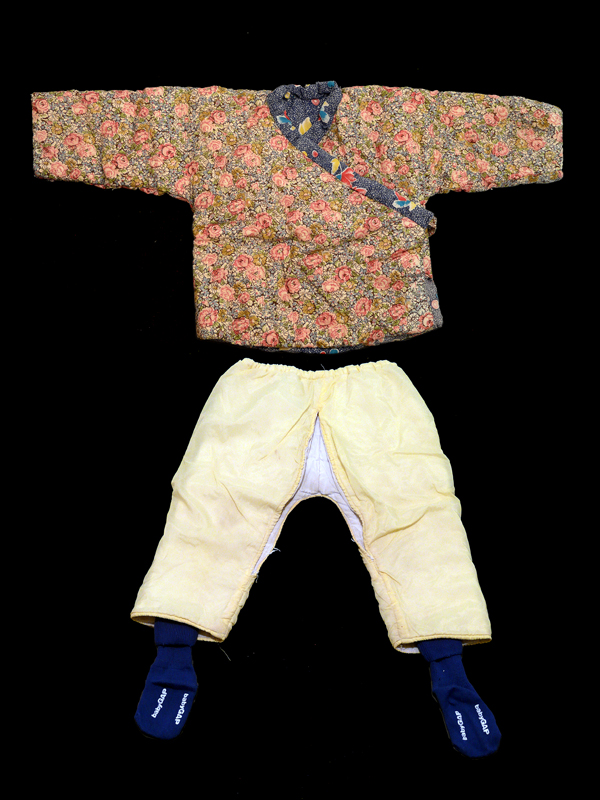 Among MOCA’s textile treasures are varied articles of adorable children’s clothing that offer unique windows into Chinese/American history. MOCA’s Adoptee Submissions Collection includes pieces collected as part of MOCA’s 2007 call for stories and artifacts documenting the memories and experiences of families who adopted babies in China. Since China began its international adoption program in 1991, American families have adopted an estimated 85,000 children. Though initially placed in the care of orphanages, the majority were not in actuality orphans, but rather baby girls whose birth families were forced to give them up or face harsh penalties for violating China’s strict One Child Policy. Thus, stories of transnational Chinese adoption were often both ones of immense joy for one family and sorrow for another.

This outfit was worn by a baby adoptee the day her adoptive parents first met her at a Hefei, Anhui Province orphanage. Her adoptive mother recalled noticing the traditional quilted floral top, cream split pants and blue Baby Gap socks and thinking how fittingly it represented what her daughter’s life would be: a melding of cultures and traditions from her land of birth as well as her new home in the United States. Read the adoptive mother’s complete story here: https://mocanyc.pastperfectonline.com/webobject/1D359473-682D-41EF-AD2F-754970710503