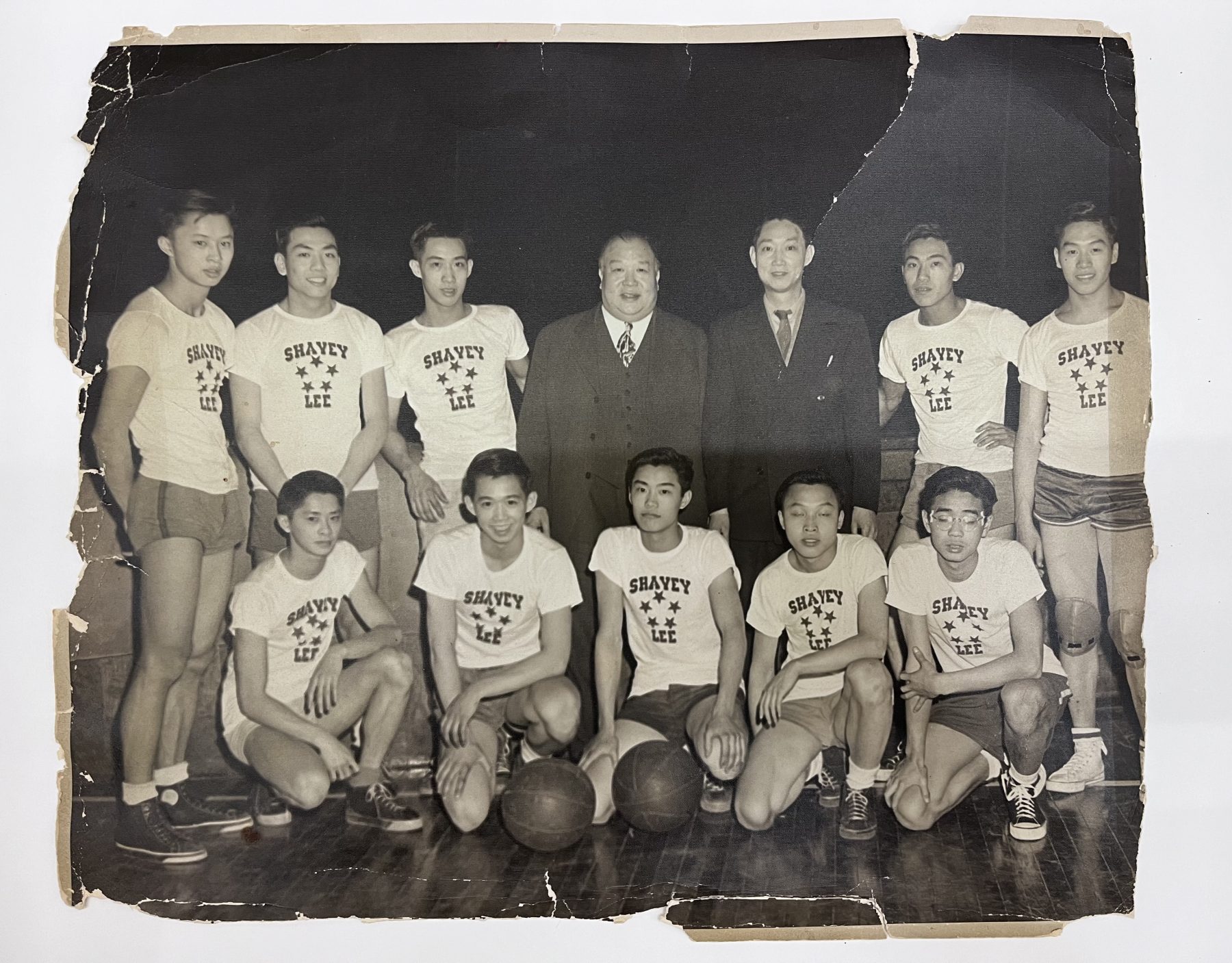 If you would like to make a contribution towards the conservation of this piece, please click to navigate to MOCA’s Sponsor an Object Donate Page and be sure to type in “Chinese American Basketball Photo” (for short) as the Object Name.

Playing basketball, a sport involving the body and mind as well as non-verbal communication, promoted connectedness and collectivity and was popular among the youth of Chinatown in the 1930s and 1940s. During this period, the YMCA, neighborhood churches, New York Chinatown’s 5th Precinct police, and Chinese American businessmen members of the Chinese Community Club all sponsored Chinese American athletic leagues to provide safe recreational outlets for their community’s growing number of youth. This photograph, taken ca. 1944, is of Shavey Lee’s basketball team. Shavey Lee was co-owner of a business license brokerage firm and the restaurant Tung Sai (East West) on Mulberry Street and a popular neighborhood figure widely acknowledged as the unofficial Mayor of Chinatown. Lee took particular interest in supporting Chinese American youth sports and served as board chairman of the Chinese Community Club, which sponsored the Chinese American Athletic League. In this photo, standing in the back row from left to right are: Dory Lum, Leung Gay Lee, Stanley Chin, Shavey Lee, the team’s coach Lung Chin, Richard Chin, and Moody Chin. On the bottom row are: Danny Lum, Stephen Chin, Donald Chin, and Newton Chin. Players Stephen Chin, Newton Chin, Donald Chin, and  Stanley Chin were among members of the famed Chinatown Midgets team which during the 1944-1945 basketball season won the Police Athletic League’s New York City Midget Basketball Championship unbeaten in 25 straight games. 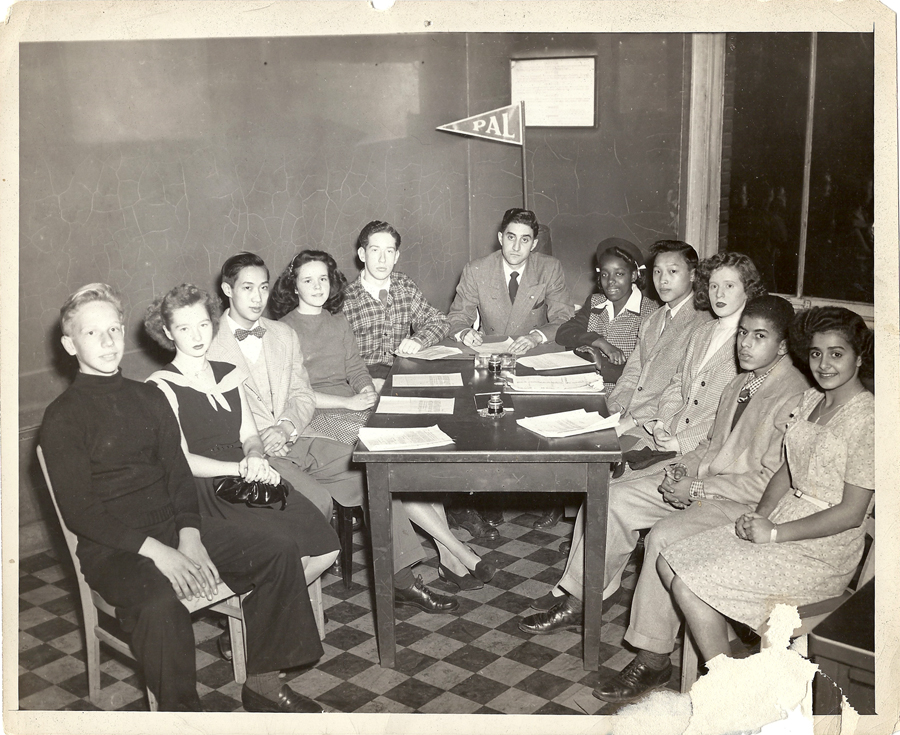 2011.005.008 A meeting of the inter-ethnic Police Athletic League. The 3rd person, from left to right, is Stanley Chin, and the 8th is, “Dr. Newton Chin.” Museum of Chinese in America (MOCA) Chinatown Sports Teams Collection. 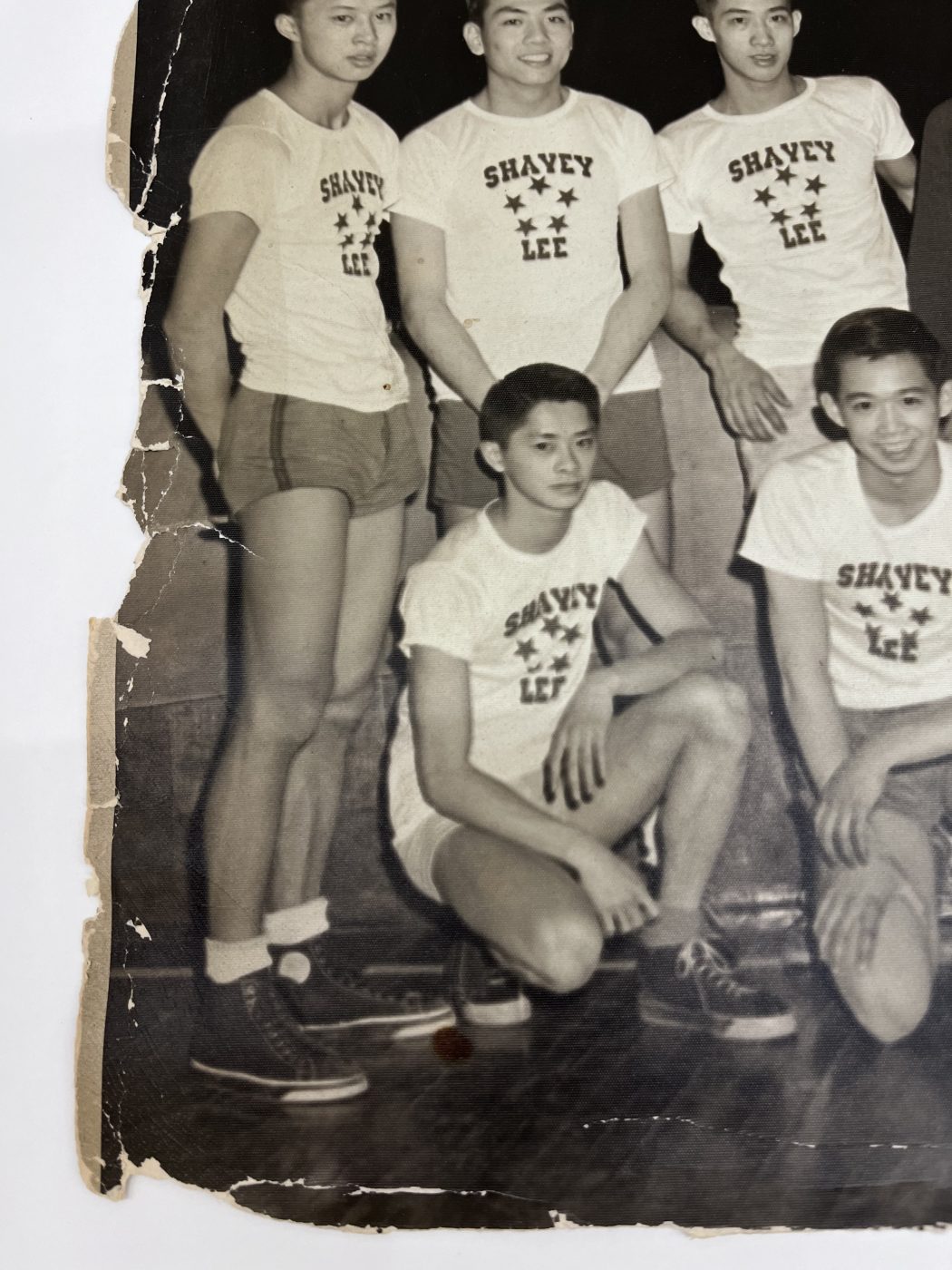 The loss of the edges of the photograph particularly evidence how brittle and fragile the photo paper has become. Treatment would include reinforcing the back of the photo with Japanese paper and wheat starch paste to give it additional support and mitigate further breakage. 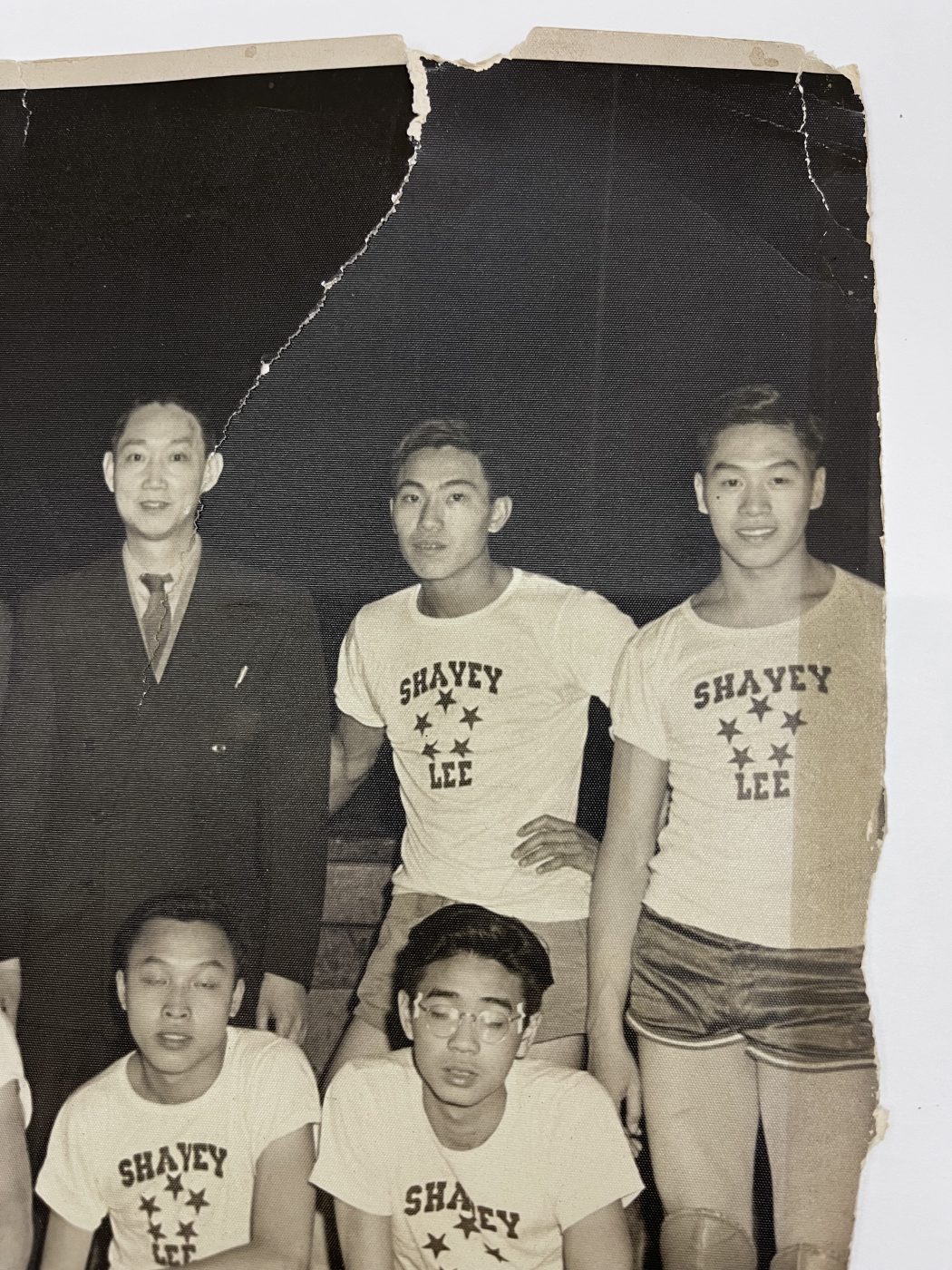 The crease running down the top of this photo would be mended before it develops into a fault line for a tear or break due to the brittleness of the paper. Note the severe discoloration and staining on the right half of the player on the right. 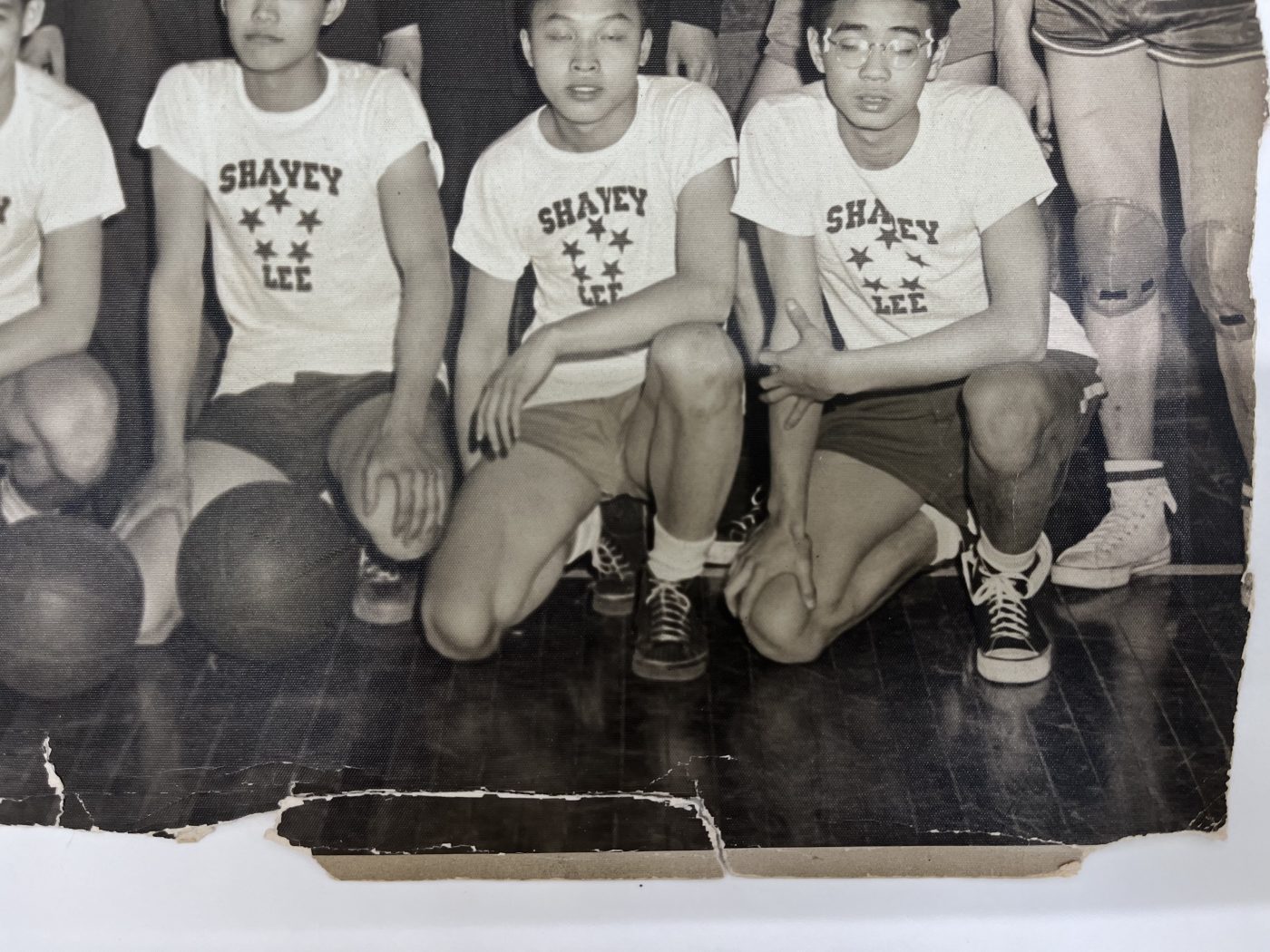 Treatment would include mending and re-adhering this bottom piece that has broken off completely. 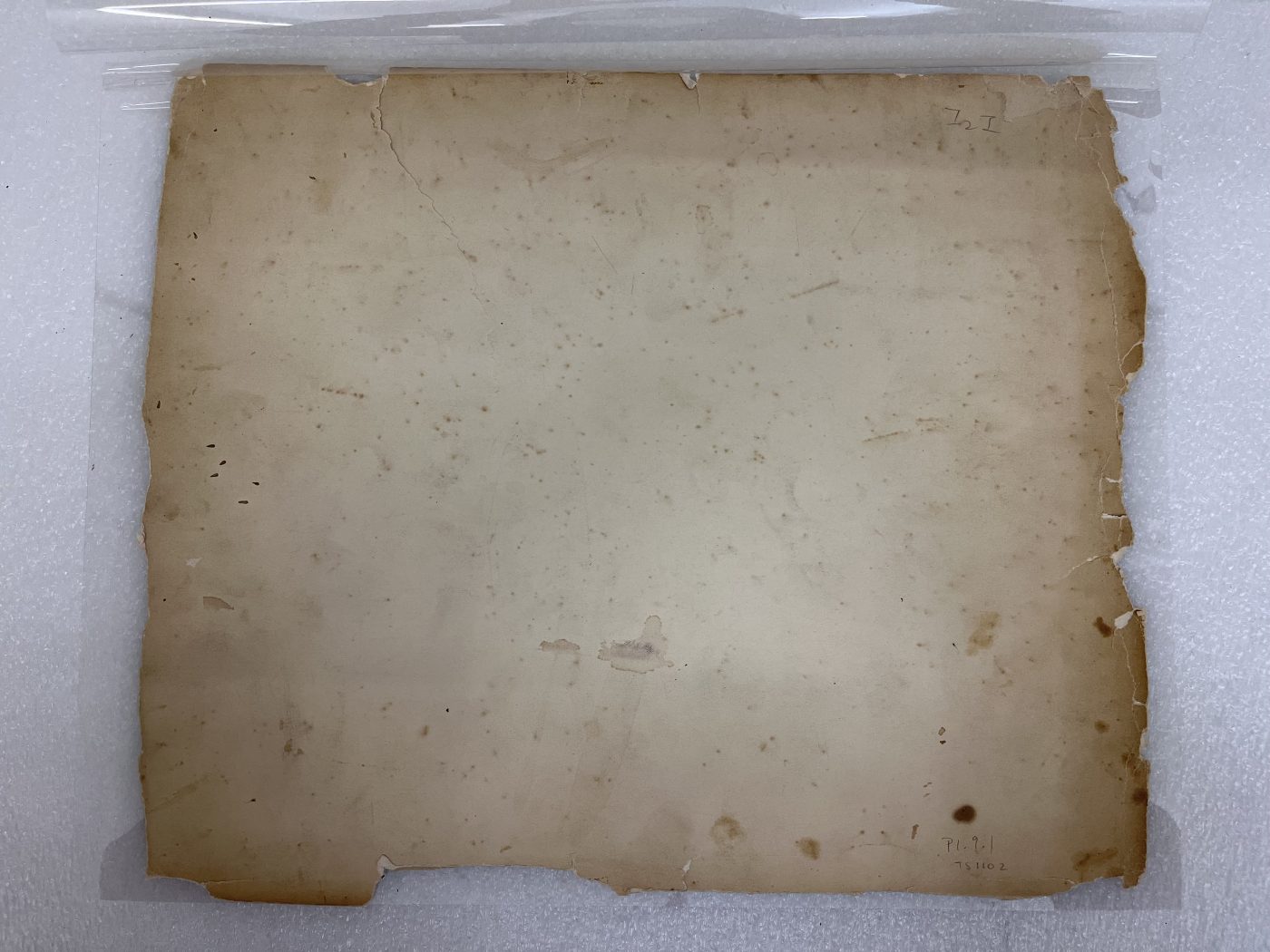 The back of the photograph would be surface cleaned carefully with eraser crumbs to minimize staining that has bled through to the front and then subsequently reinforced with a layer of archival Japanese paper and wheat starch paste.

This photograph has become extremely brittle, making it fragile and easy to tear. Much of the top, left and right edges of the photograph has been lost due to such tears and breakages. There is also severe discoloration and staining, particularly down the right and left edge of the photo, where it may have been in prolonged contact with something that was acidic (see the white shirt of the first standing player from the right and left).