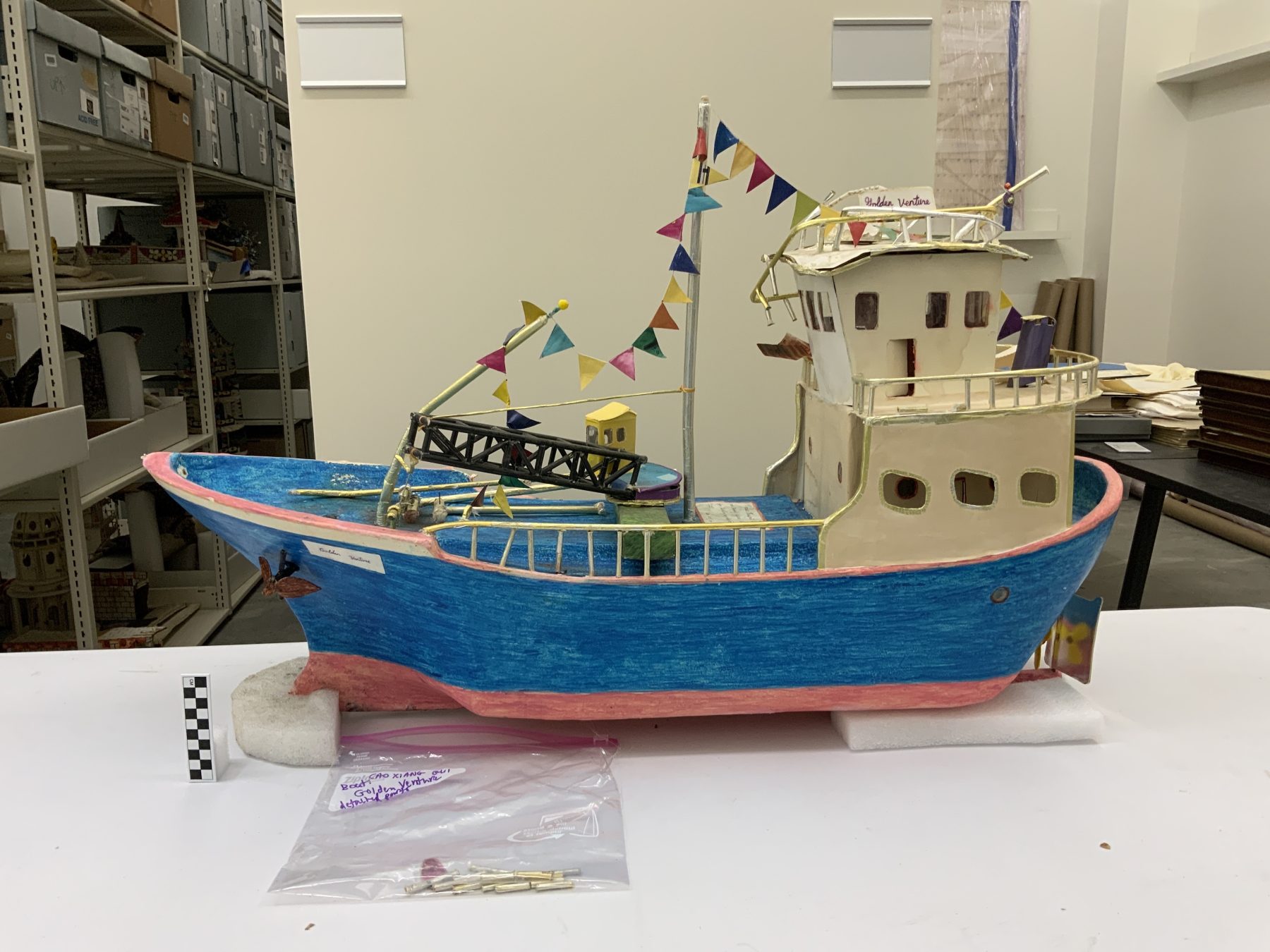 1996.061.045 Paper sculpture of the Golden Venture ship made by one of the refugees detained after this vessel ran aground at Rockaway Beach, Queens in 1993. Papier-mâché and colored marker, 1993-1996. Photograph taken post-fire. Museum of Chinese in America (MOCA) Fly to Freedom Collection.

If you would like to make a contribution towards the conservation of this paper sculpture, please click to navigate to MOCA’s Sponsor an Object Donate Page and be sure to type in “Golden Venture” (for short) as the Object Name. 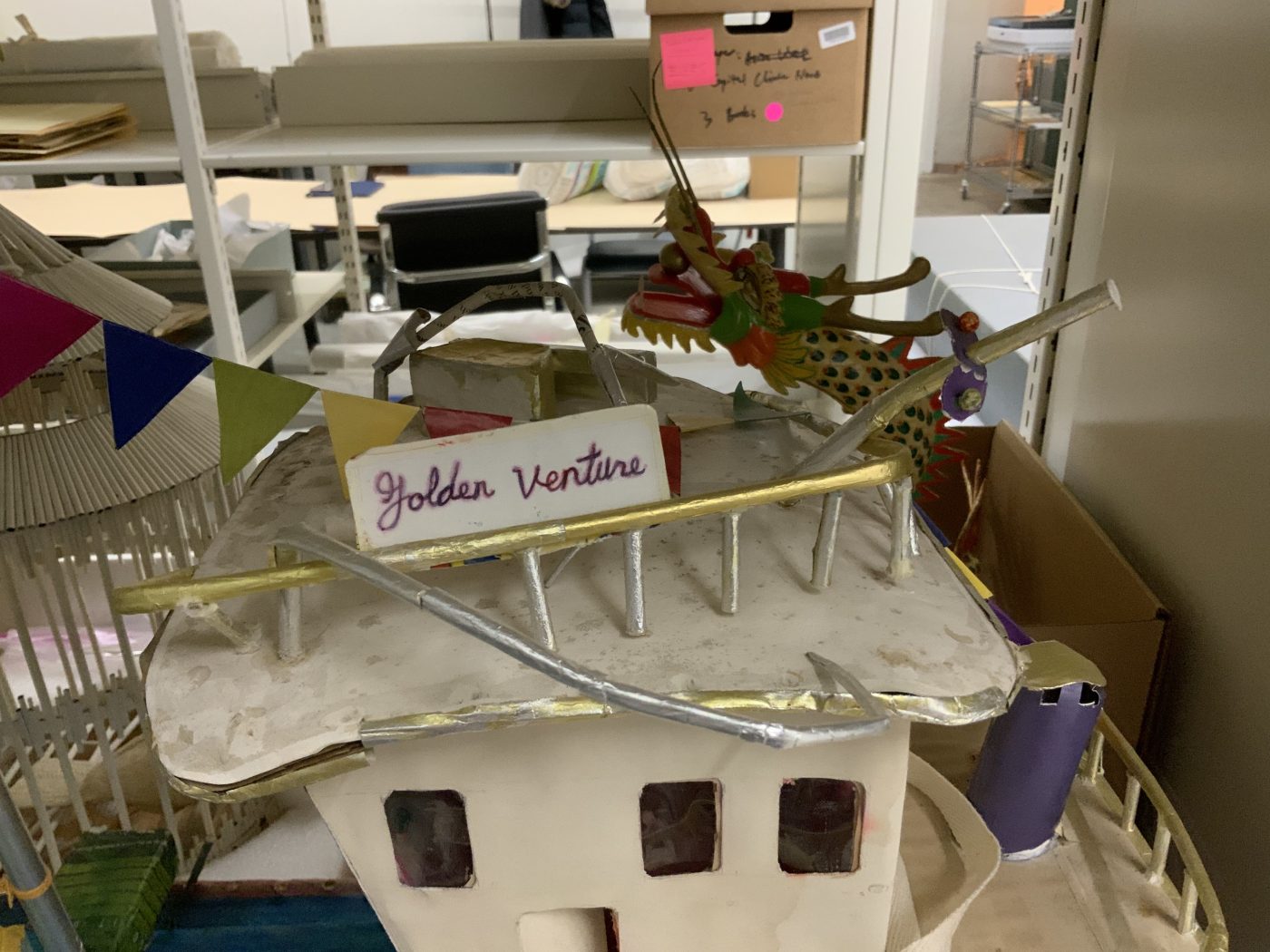 The once white surface of the flying bridge now shows grey dotted discoloration, evidencing water damage. The hand railings have been bent and need to be secured back in their proper place. 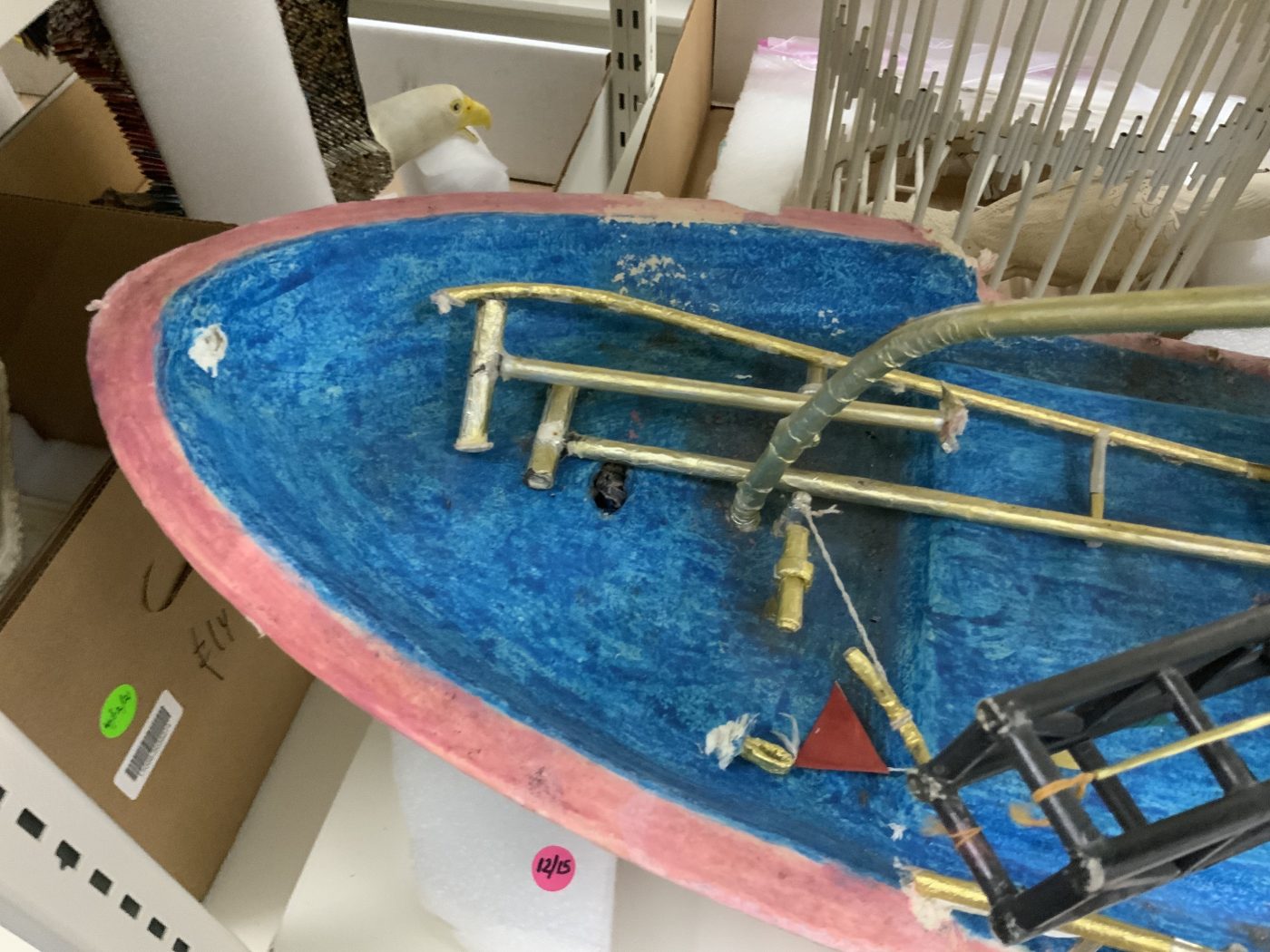 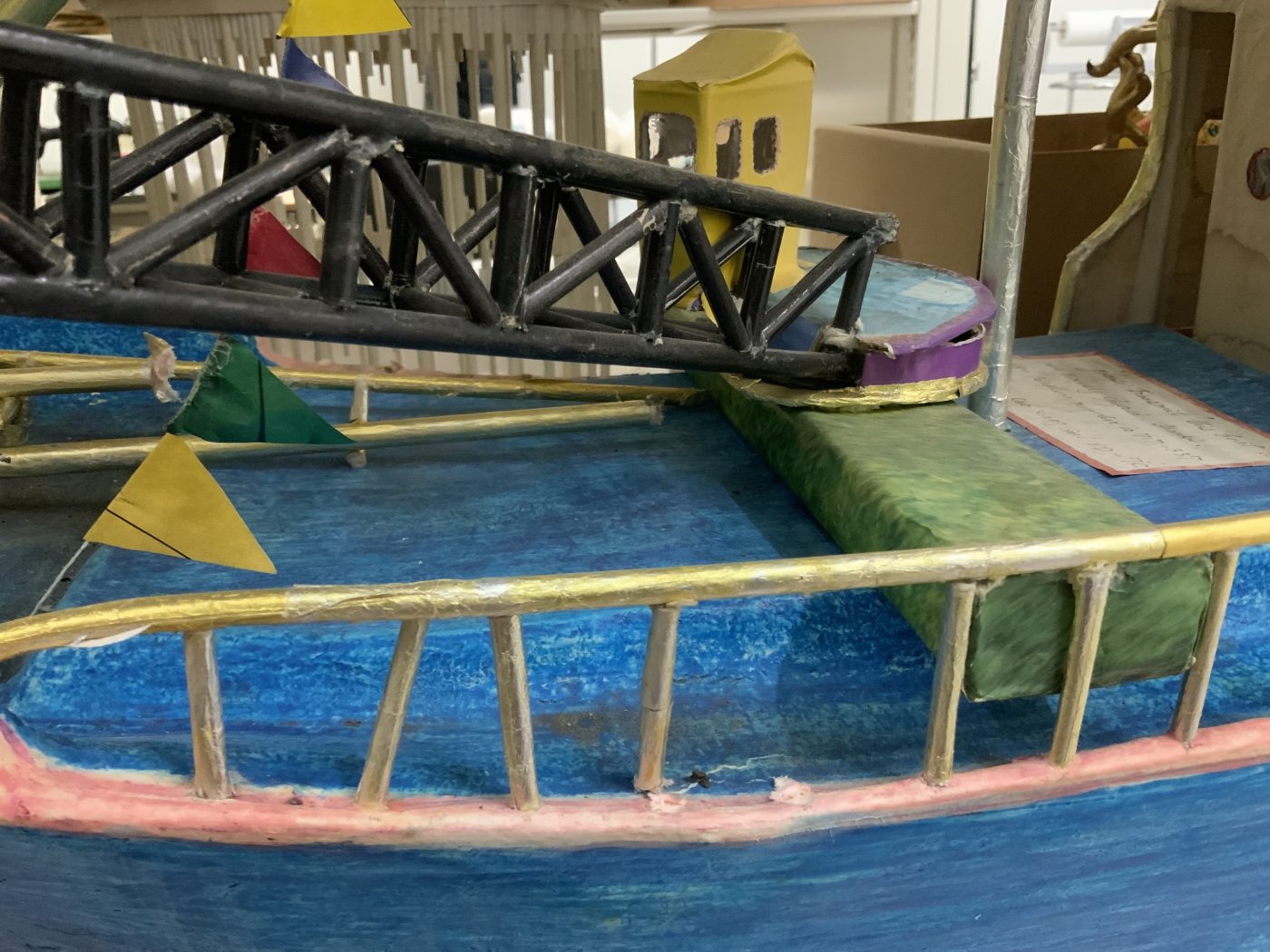 The areas of discontinuity of color such as the top and side of the upper deck are evidence of water damage. Treatment would focus on reducing tide lines if possible and toning pieces to match surrounding colors. 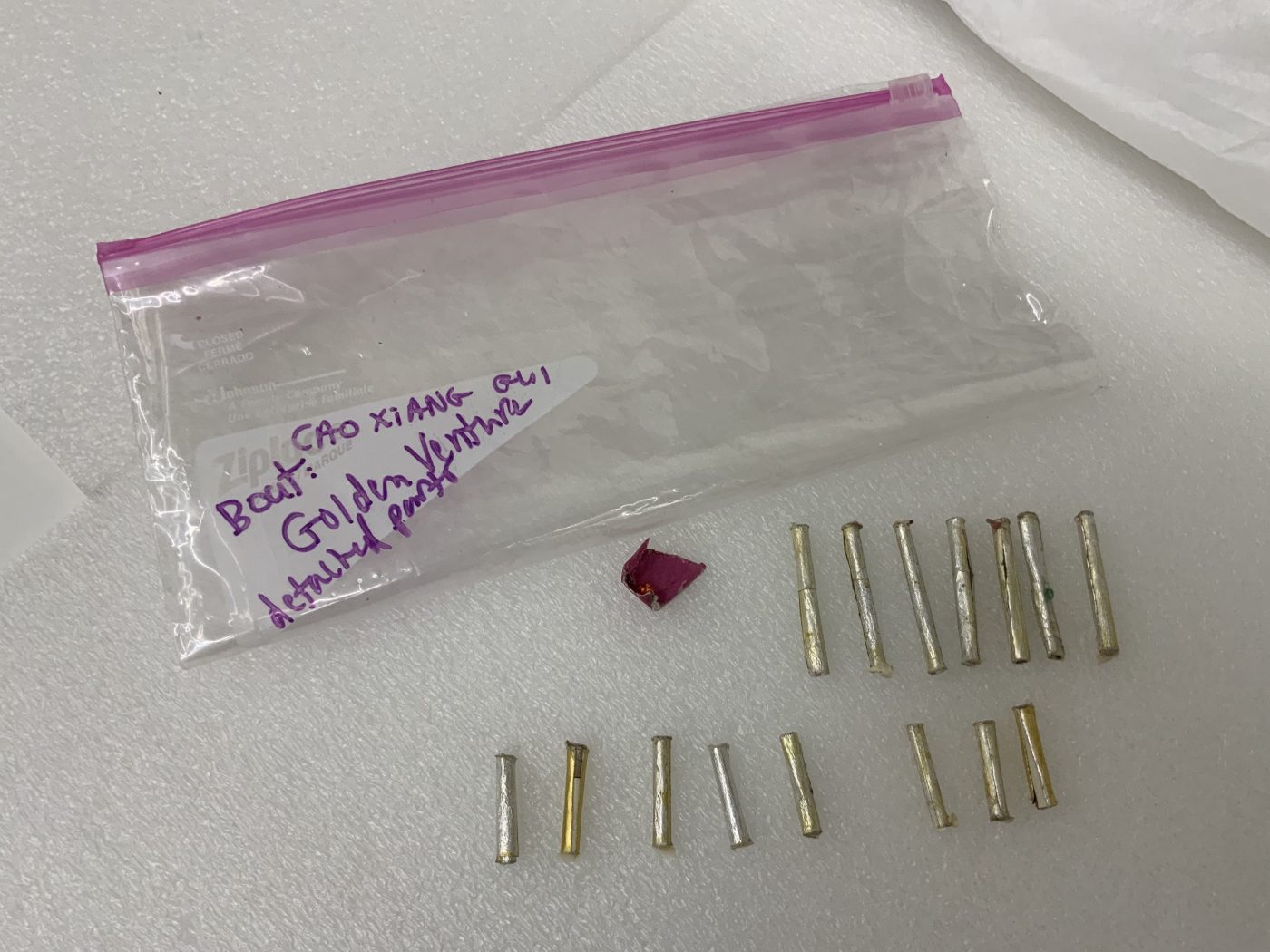 There are 15 small railing fragments in silver or gold foil and 3 longer pieces that will need to be re-adhered to the ship.

This is a paper sculpture of the Golden Venture made by Cao Xiang Qui, one of among 286 Chinese, mainly from Fujian Province, who paid tens of thousands of dollars to be smuggled into the United States in the cargo hold of this ship. Immigration officials arrested Cao and other survivors after a mutiny caused the ship to run aground in the early morning of June 6, 1993 at Rockaway Beach in Queens. Denied any possibility of bail, they were detained at York County Prison in Pennsylvania, some for as long as four years while awaiting a ruling on their asylum cases. To stave off deportation, Cao and fellow Golden Venture refugees petitioned for political asylum as Christians, democracy activists, or potential victims of forced sterilization under the system set up by the United States Refugee Act of 1980. But as their cases dragged on for years, making papier-mâché and folded paper sculptures out of magazines, toilet paper, and other materials available to them in prison became a way to pass the time and create thank you gifts for pro bono lawyers and other supporters assisting them with their asylum cases.

MOCA acquired some of these folk art pieces and mounted an exhibition in 1996 to draw attention to the then still ongoing plight and fight of Golden Venture refugees. Cao’s Golden Venture ship featured prominently in this “Fly to Freedom” exhibit. In 2017, MOCA once again showcased the paper sculptures in its “FOLD” exhibit, which used the Golden Venture refugees’ art and stories to humanize and intervene positively amidst the fearful climate that President Trump’s anti-immigrant policies and rhetoric rekindled.

This large papier-mâché and origami paper model suffered water damage during the fire, resulting in portions of the masts, rigging, railings, and upper decking becoming detached, deformed or bent. Many of these components were retained in the salvage operations and can be repositioned and reattached to the structure, but approximately 17 pieces of the ship’s vertical railings were lost and will need to be replicated. There are also stains and tide lines in the paper, and marker colors that have bled from the water and moisture.