Please help us fund their conservation! Any amount–large or small–helps!

If you would like to make a contribution towards the conservation of these Chinese hand laundry implements, please click to navigate to MOCA’s Sponsor an Object Donate Page and be sure to type in “Hand Iron and Trivet” as the Object Name.

This antique sad iron and beautifully decorated trivet (or iron stand) both embody an important part of Chinese immigrant history as old implements used at a Chinese hand laundry. Sad irons (“sad” is old English for “solid”) were a type of iron made out of a triangular-shaped chunk of cast iron and so named because of their hefty weight (5 to 9 pounds). Popular in the 19th century before the convenience of an electric iron, sad irons were heated over a stovetop fire and once hot, had to be gripped with a heat protective pad or thick rag. An experienced laundryman had to know how to determine whether the iron was hot enough but not so hot that it would scorch the fabric. Operating this type of iron for long periods was hot, arduous work and when not in use, it had to be regularly cleaned, sand-papered, and greased to prevent rust and ensure it could glide smoothly and immaculately over cleaned clothing.

To protect the ironing surface, the hot iron could be temporarily rested on the accompanying trivet. The trivet was designed such that the iron could be easily slid from the bottom and back unto the ironing surface without a laundryman having to constantly lift the heavy iron. On the top of the trivet is printed an image of what looks to be an industrial Collar and Cuff Ironer (operated by hand and steam) along with the Chinese characters “矮仔鬼,” possibly a Cantonese nickname for this stout machine (printed perhaps as an advertisement). The trivet was manufactured and distributed by John Randles Inc. (founded 1864), which had a long history of furnishing laundry and restaurant supplies to Chinese businesses in New York. To introduce and sell products within the Chinese community, the company employed Chinese salesmen such as James Louie Fletcher, who used his savings, knowledge, and connections cultivated to eventually open his own long-running Chinese laundry supply store in New York Chinatown (World Trading Company in 1932 on Moscoe Street, which became United Trading Company at 190 Canal Street in 1933 and United Trading and Fletcher Inc. at 60 Mott Street in 1950).

We would love to restore and display these pieces, particularly this now quite rare trivet, in MOCA’s permanent exhibition. Conservation treatment would remove the extreme corrosion and help bring out the beautiful details.

The photographs below capture the rust and corrosion covering the entire surface of the hand iron and trivet. Click on an image to enlarge its details. 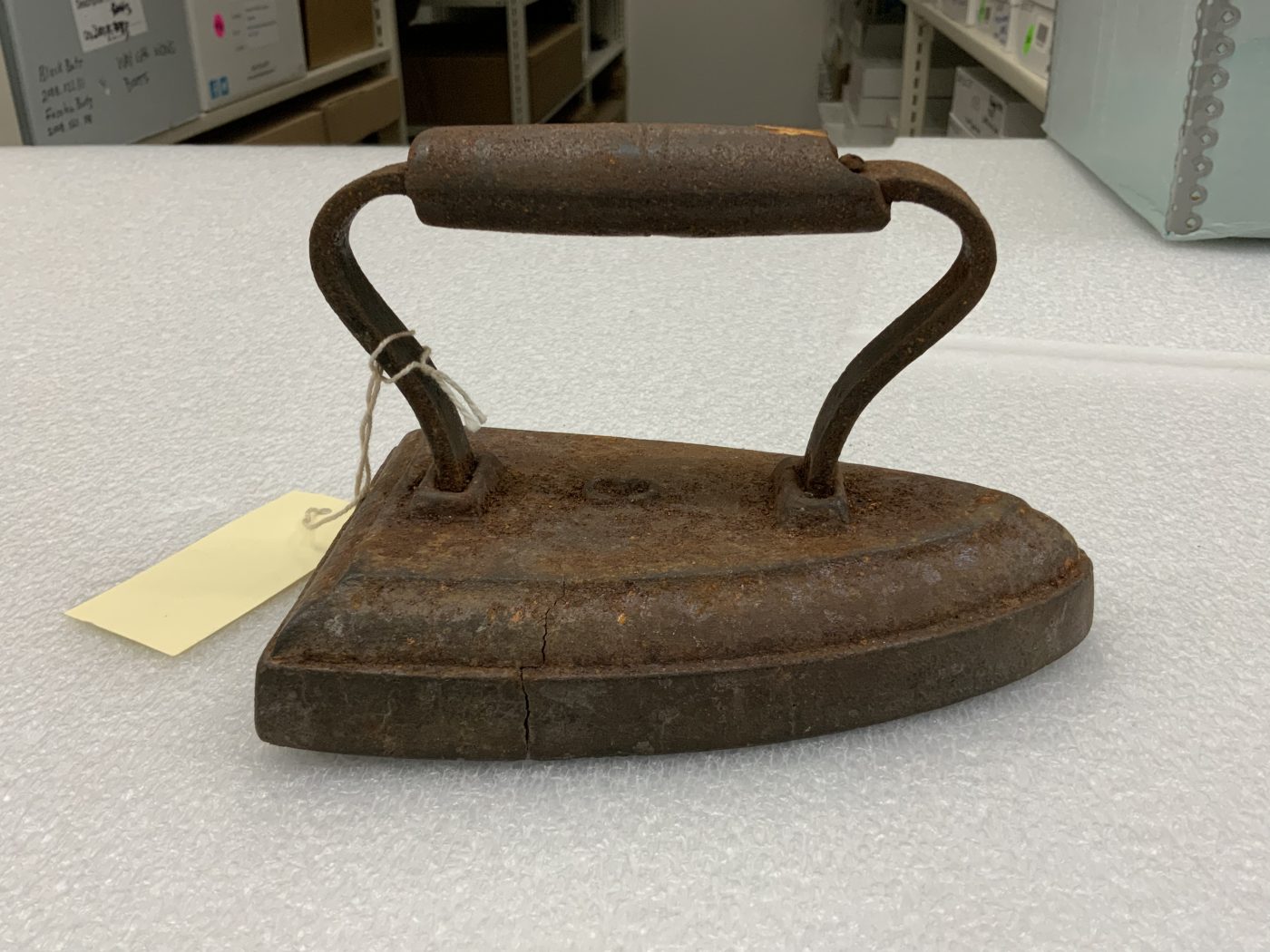 Side profile of the hand iron 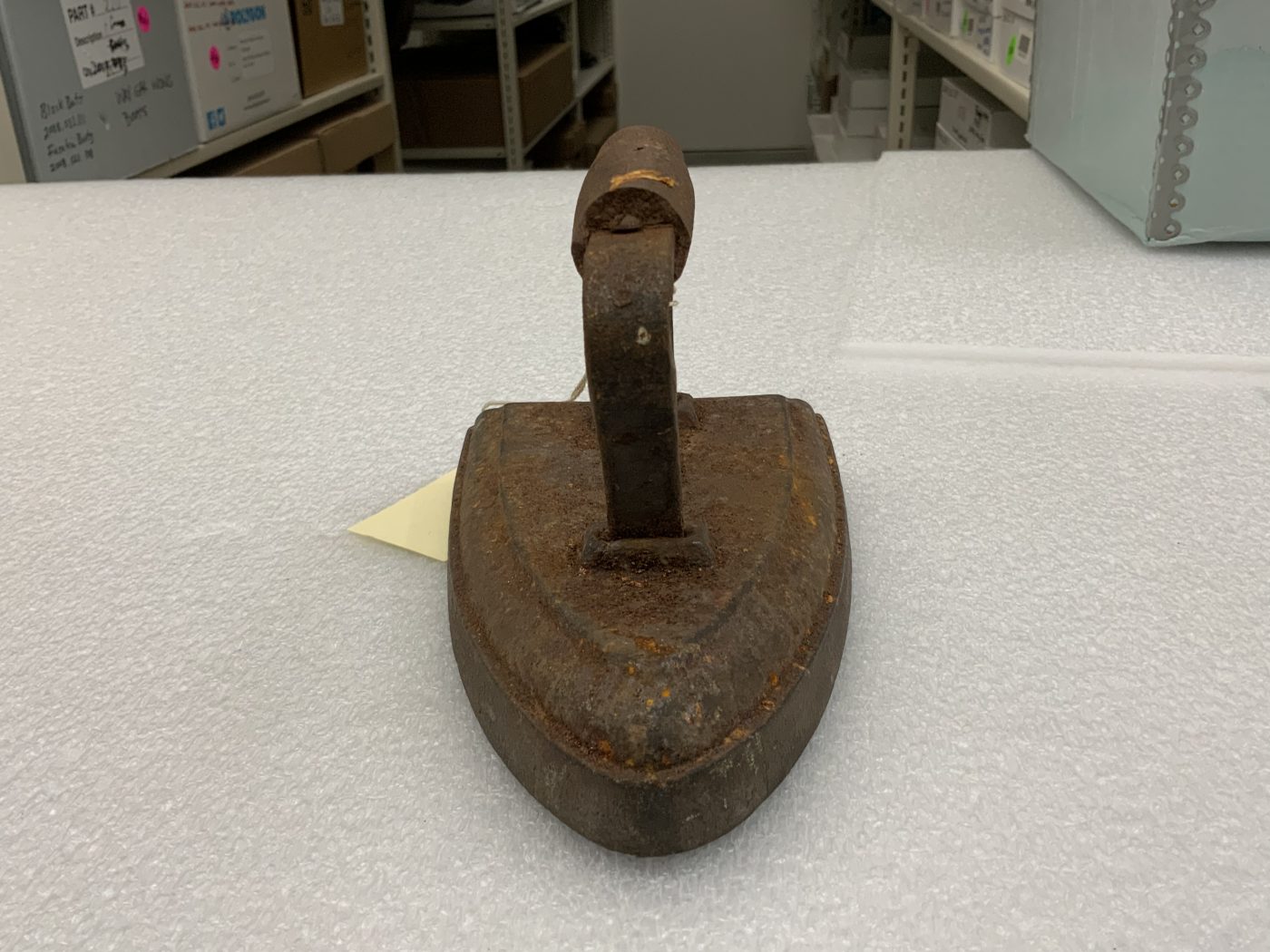 Front profile of the hand iron 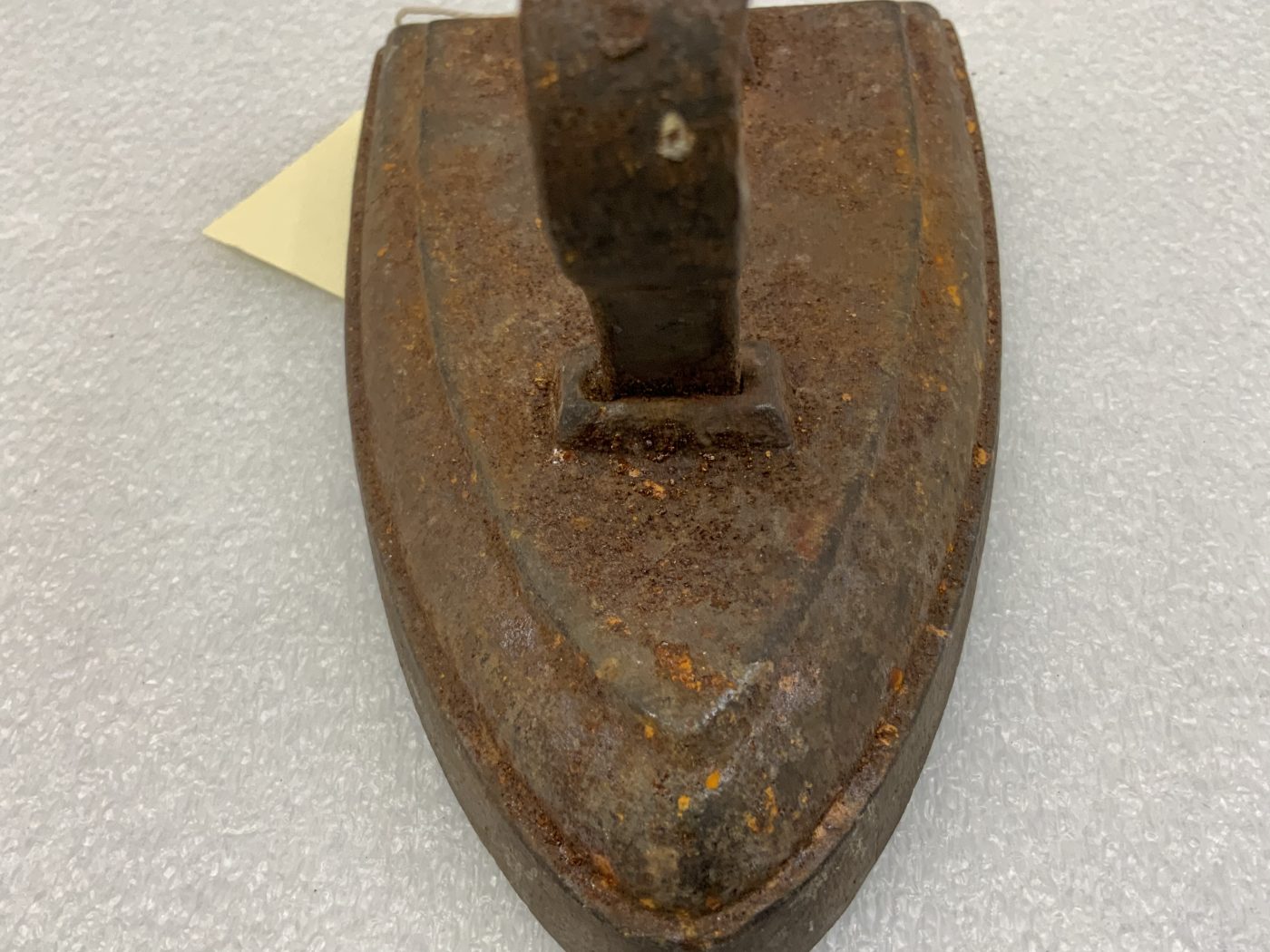 Close-up of the front profile 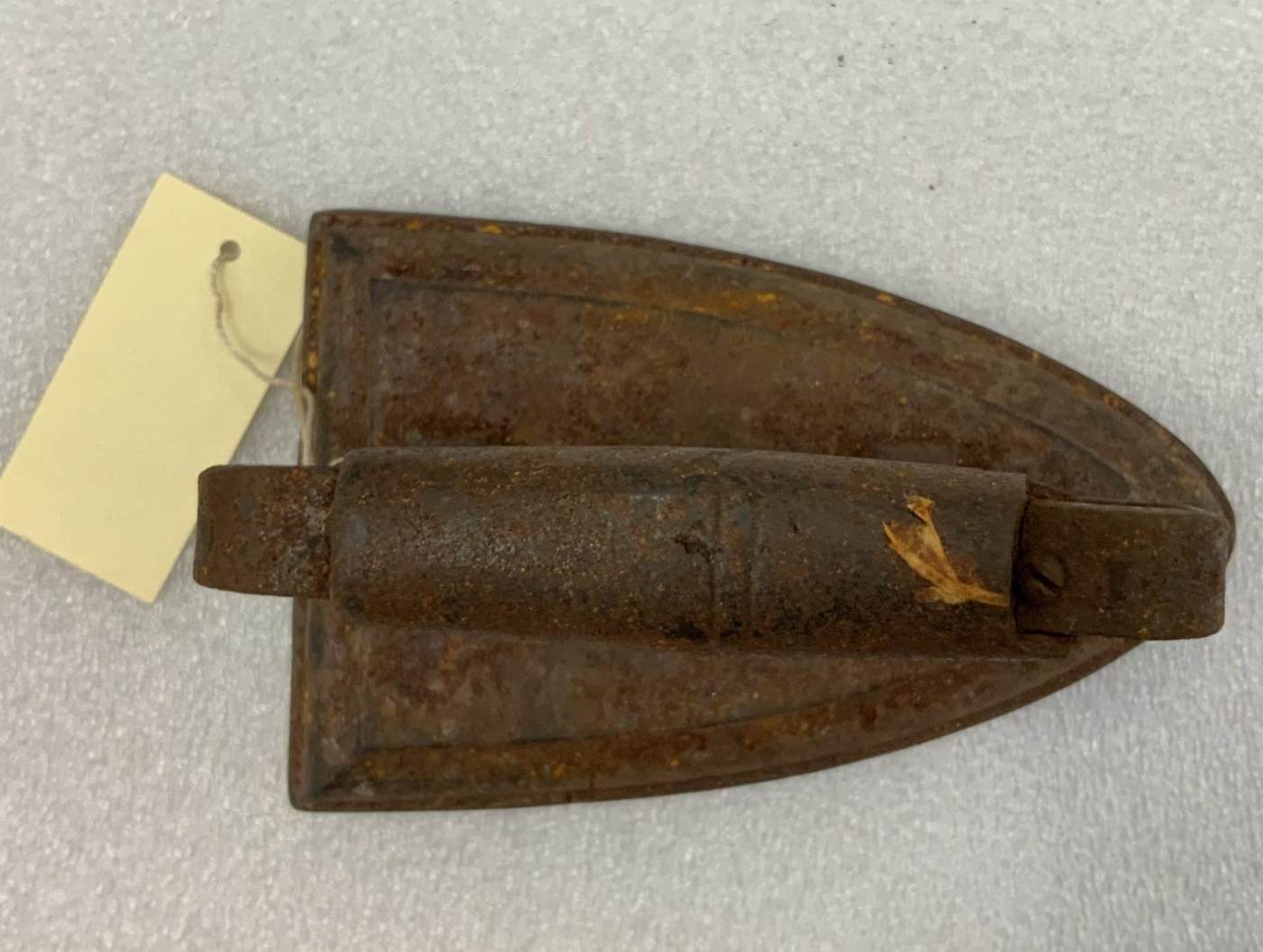 Top profile of the hand iron 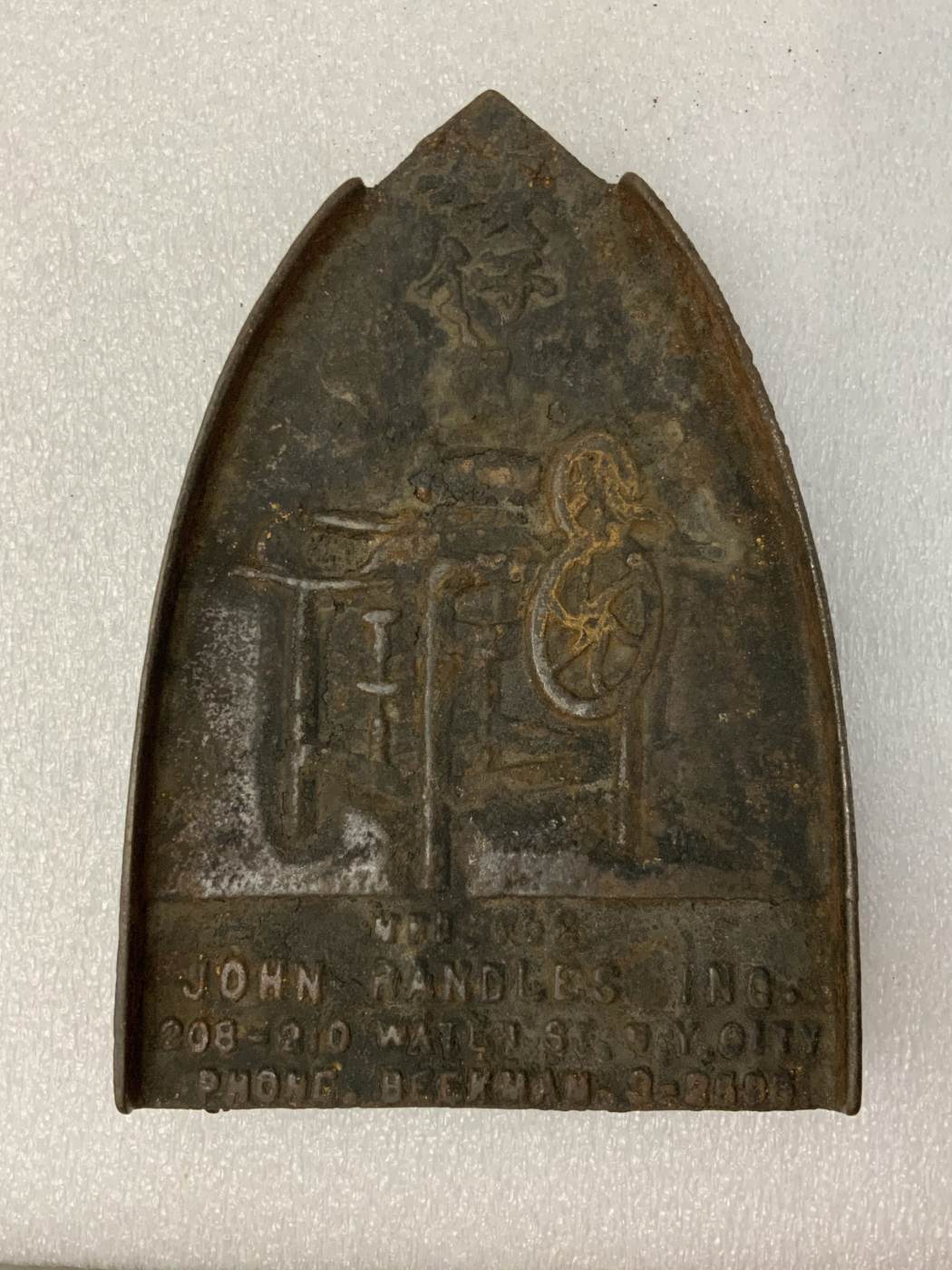 Top profile of the trivet 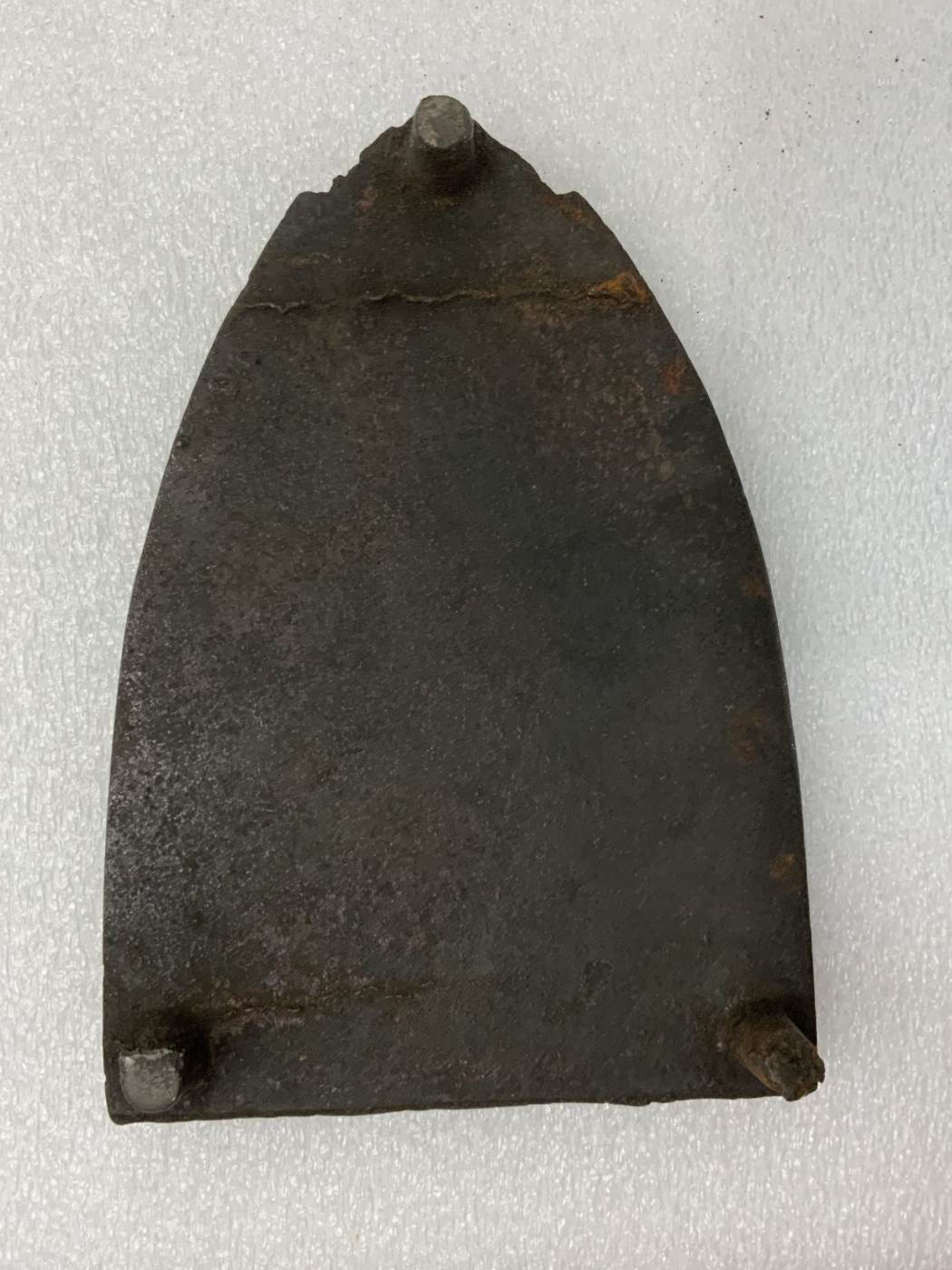 Bottom profile of the trivet 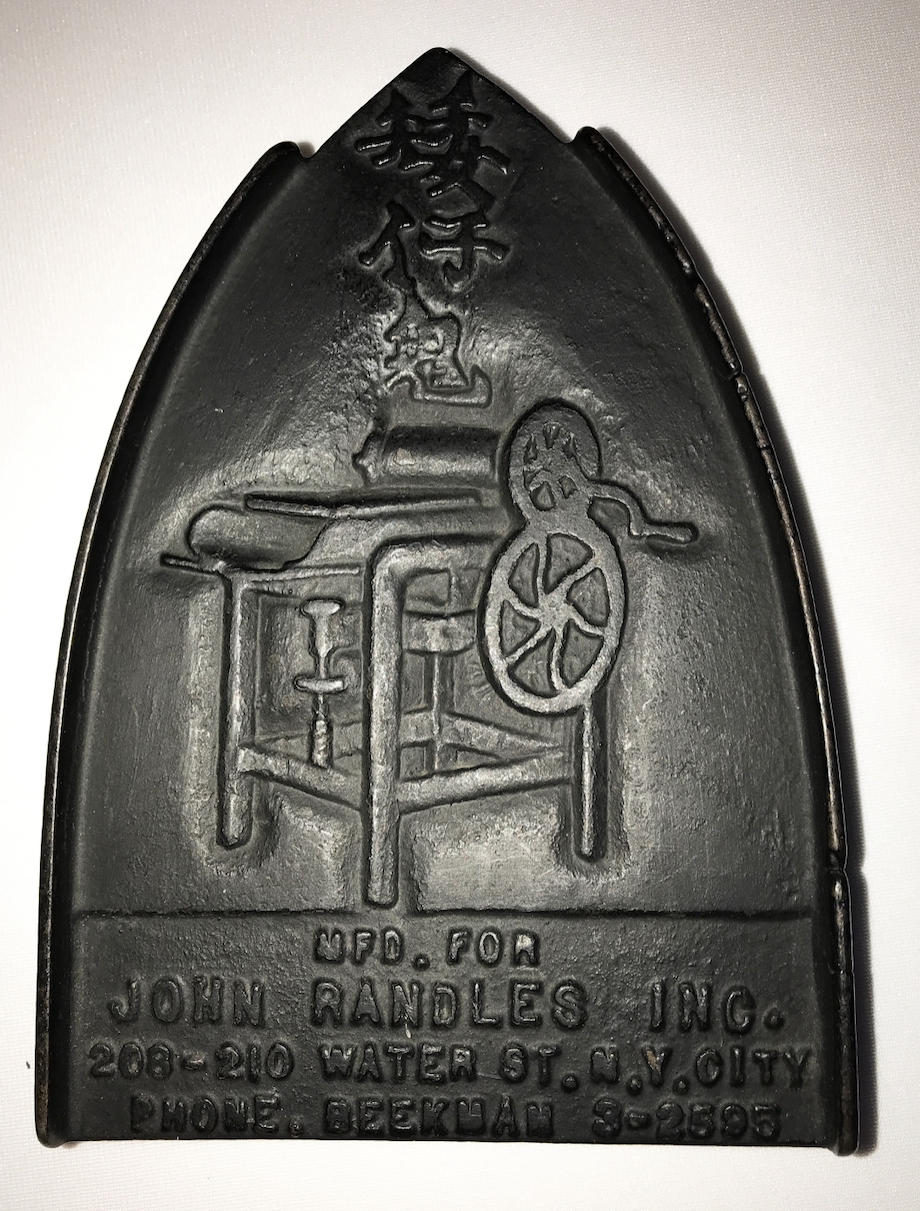 This image of a pristinely restored trivet was taken from the Trivetology.com blog. We would love to restore our own trivet to a similar good condition.

The iron has stress cracks on all three sides that run through the thickness of the iron from the base to the top. These cracks have small gaps and losses around their break edges. The entirety of its surface exhibits rusty metallic to bright orange iron oxide corrosion. There is a loss on the upper front edge of the iron’s handle.

The trivet exhibits areas of black, red/brown (rust) and yellow corrosion within the cast decoration on the upper surface. The underside has a more stable, compact surface with the exception of loss areas on the back left foot.