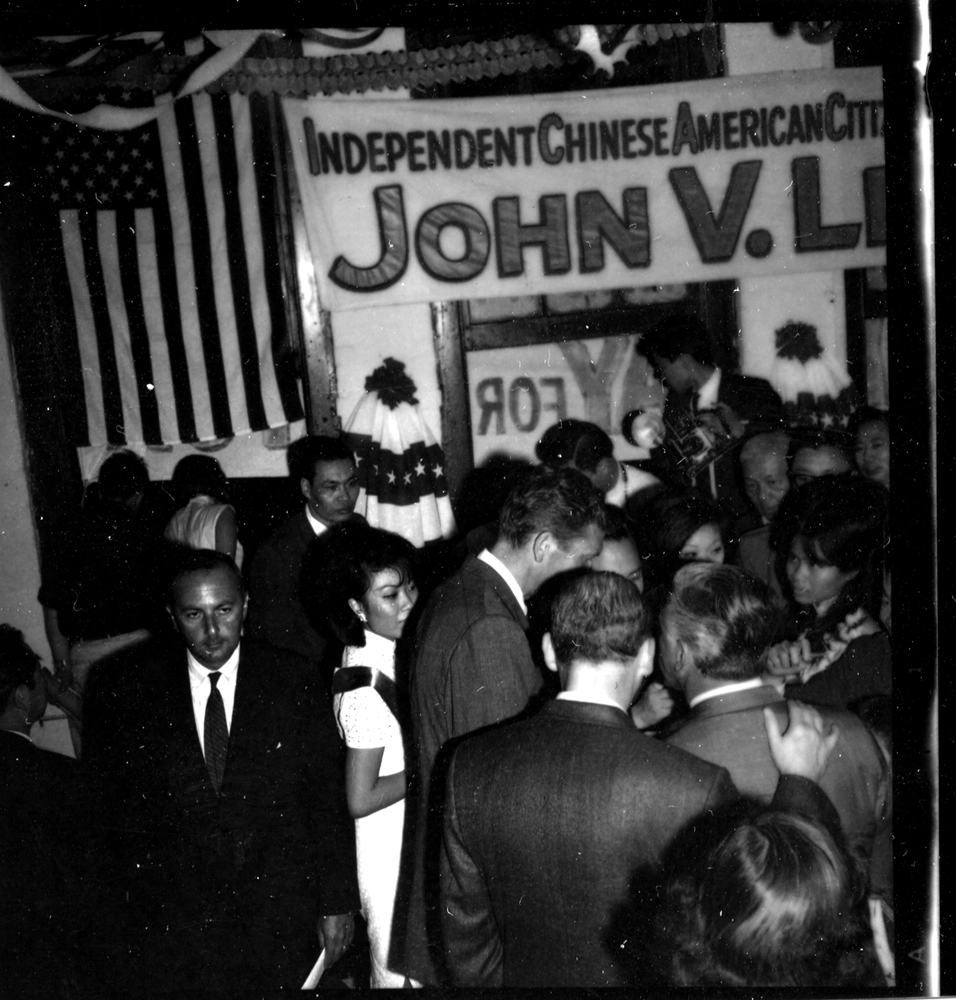 Well known were New York City Mayor John V. Lindsay’s regular walking forays into Harlem and his capture of 45 percent of the city’s Black voters in the 1965 mayoral election. These photographs from the Chinese American Times document the mayor’s less reported courting of Chinese American voters and visit to Chinatown during his 1969 reelection campaign. That year’s race pitted Lindsay, the incumbent and Liberal Party candidate, against Democratic primary winner, Mario Procaccino, and Republican nominee, John J. Marchi, in a contentious three-way race that prompted each to scour the city’s mosaic of ethnic communities for votes. Here, Lindsay is pictured attending an event with enthusiastic supporters hosted by Independent Chinese American Citizens of New York City, and walking the streets of Chinatown feted by parades, fireworks, and dragon dancers. When Lindsay ultimately won reelection, he recognized Chinese Americans’ political support by appointing Irving S. K. Chin to the city’s Human Rights Commission. As the first person of Chinese descent to serve in the position, Chin worked to address housing, employment, and other pressing problems then facing the Chinatown community due to its rapid expansion in the wake of recent relaxations of race-based immigration restrictions. It should be noted that the Chinese American Times’ coverage of the event was especially apt. It was the first paper catering to the English-speaking second-generation of Chinese Americans eager to exercise political participation, whereas its forerunners had served a primarily Chinese-speaking immigrant generation. 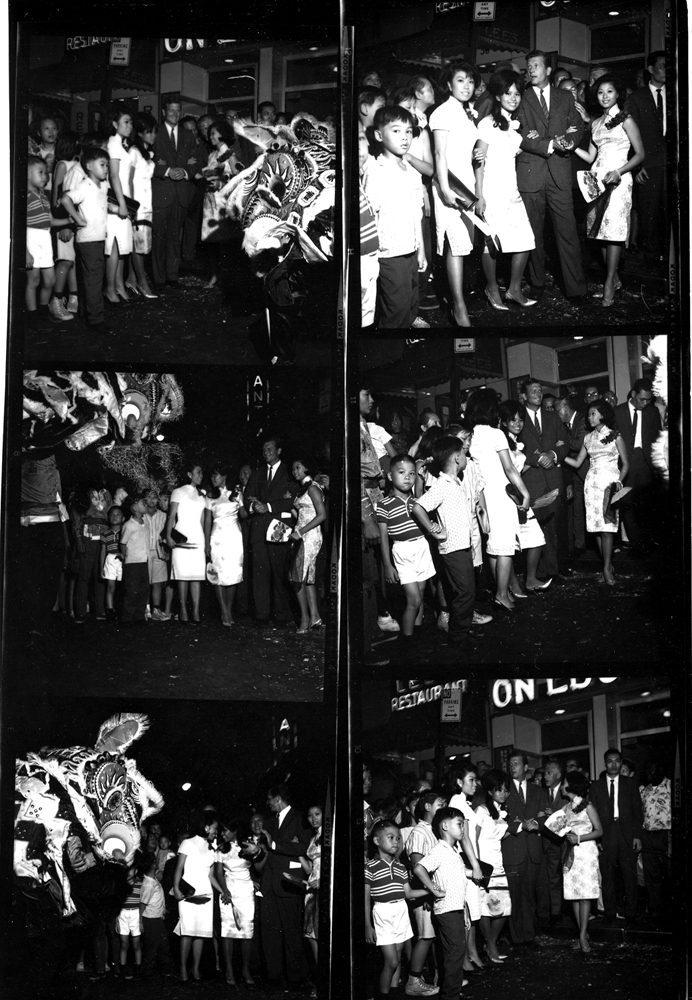 2000.020.038 2 photo strips with 3 photos each. Lindsay outside with crowd of people watching a Chinese lion dance. Photographed with the same 3 girls wearing dresses in the other photos. 2条连版照片，每条3张照片。林赛在外面和一群人观看中国舞狮。照片中站在他身边的穿着连衣裙的女孩就是其他照片中的那3位。 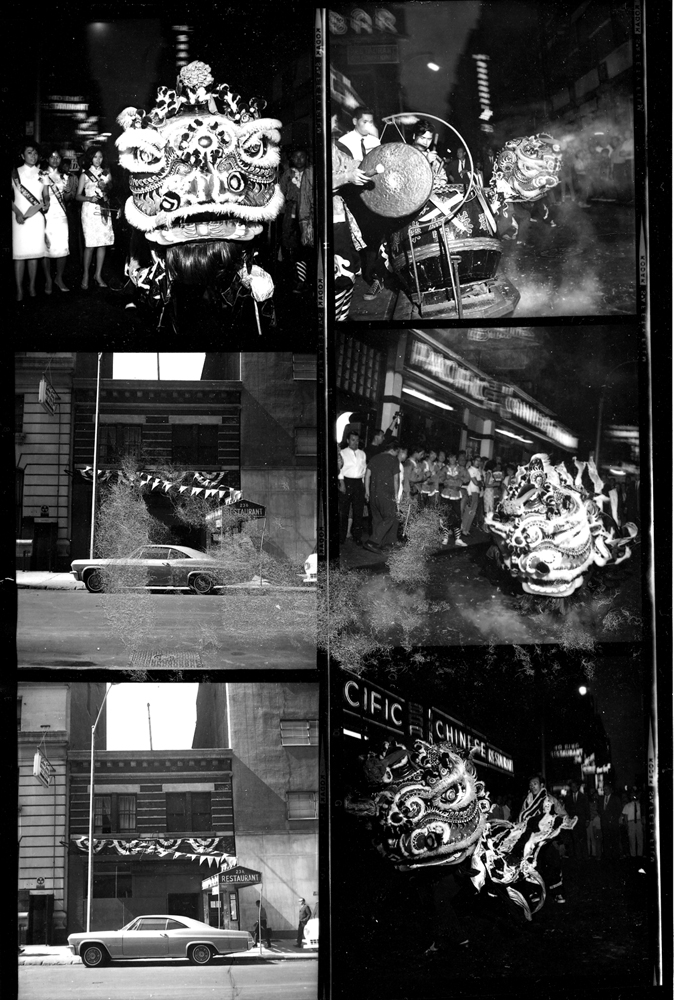 2000.020.039 2 photo strips with 3 photos each. Close up shot of Chinese lion head and sideways view of the body in front of Pacific Chinese Restaurant. Photos of car parked in front of building. Photo of men playing Chinese instruments like the gong and bass drum. 2条连版照片，每条3张照片。中国狮子头的特写镜头和在太平洋中餐厅前面狮身的侧面视图。汽车停在大楼前的照片。男子演奏锣鼓和大鼓等中国乐器的照片。 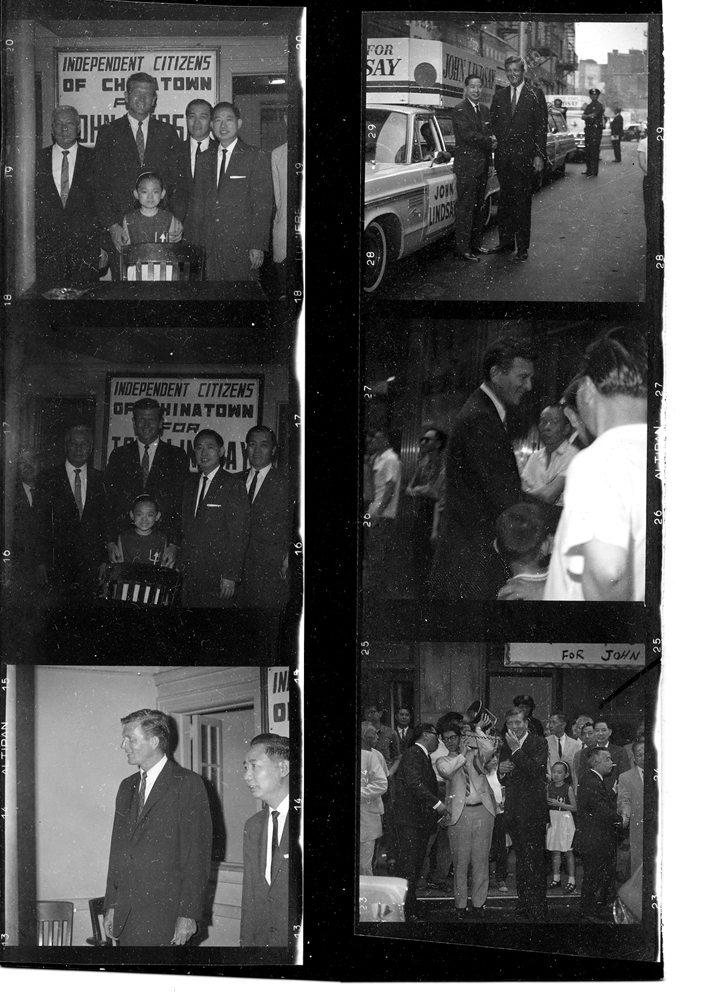 2000.020.040 2 photo strips with 3 photos each. Lindsay posing with 3 men and child with sign “Independent Citizens of Chinatown” poster behind them. One candid photo of Lindsay from sideview standing next to man. Another candid of Lindsay shaking hands with people in a crowd. One of Lindsay shaking hands with man in front of a car. Last photo of Lindsay speaking into a megaphone with the crowd behind him. 2条连版照片，每条 3 张照片。林赛与3个男人和1个孩子合影，身后有 “唐人街独立公民” 海报的标志。林赛与1名男子合影的侧面照片。林赛与人群中的人握手。林赛的在车前与一个男人握手。最后一张照片是林赛对着扩音器讲话，他身后有是人群。