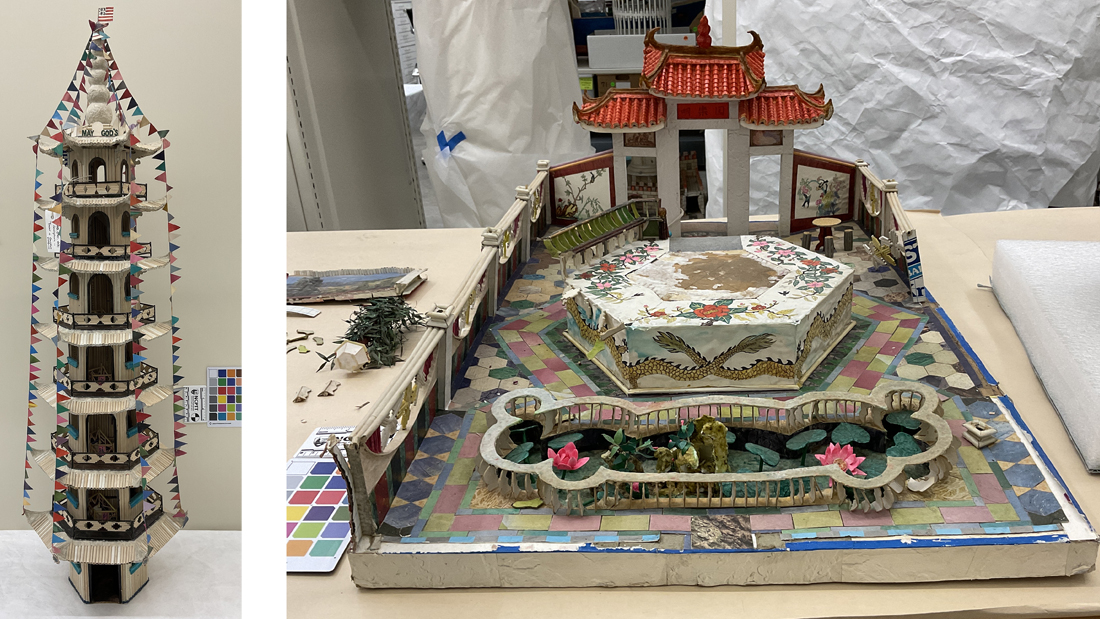 2010.041.031 Pagoda paper sculpture and accompanying base made by a refugee of the Golden Venture while detained at York County Prison, Pennsylvania. H-40.5 W-12.5 L-12.5 inches. Museum of Chinese in America (MOCA) Fly to Freedom Collection.

If you would like to make a contribution towards the conservation of this paper sculpture made by a refugee of the Golden Venture, please click to navigate to MOCA’s Sponsor an Object Donate Page and be sure to type in “Pagoda Paper Sculpture” (for short) as the Object Name.

This intricately detailed hexagonal pagoda tower and Chinese garden is a sculpture made entirely out of paper by a refugee of the Golden Venture while detained at York County Prison in Pennsylvania. The pagoda design, a temple structure associated with Buddhism, and the pond of blooming pink lotuses, Buddhism’s most recognizable symbol for purity and enlightenment, is subtly blended with a small American flag and a monotheistic, possibly Christian, blessing inscribed along the top of the tower which reads: “May God’s Grace and Peace Be With You.” MOCA does not know the name of the artist and therefore can only speculate as to their intention in mixing these elements in this particular piece. Given that some Golden Venture refugees applied for asylum from persecution on the grounds of being Christian, it is possible that it is a self-representation of being Chinese and Christian and a commentary on the religious freedom that allowed them to be both openly in the U.S. but not in China. Or, it might simply be a blessing that the artist thought suited to the recipient of the sculpture.

The artist of this piece was one of among 286 Chinese, mainly from Fujian Province, who were caught and arrested while attempting to be smuggled into the U.S. on June 6, 1993, after their ship, the Golden Venture, run aground at Rockaway Beach in Queens. Survivors of the shipwreck were subsequently detained in prison without the possibility of bail, some for as long as four years. To stave off deportation, some petitioned for political asylum as Christians, democracy activists, or potential victims of forced sterilization under the system set up by the United States Refugee Act of 1980. But as their cases dragged on for years, making papier-mâché and folded paper sculptures out of magazines, toilet paper, and other materials available to them in prison became a way to pass the time and create thank you gifts for pro bono lawyers and other supporters assisting them with their asylum cases. Paper—along with the art of using paper to create 3-dimensional objects, or papier-mâché—was invented in Han Dynasty China circa 202 B.C.- 220 A.D. Despite their best efforts, in the end, only thirty people were granted asylum; 110 were actively deported.

We would love your support to repair this unique piece from MOCA’s Fly to Freedom Collection, which helps MOCA tell the Golden Venture refugees’ stories and reflect on immigration and continuing racial and economic inequalities.

The pagoda itself is in good shape but requires cleaning to return some of its brightness. The detailing on the balcony railings and roofs are well preserved, as is the spiral staircase running down the entire length of the inside. This interior staircase detail can be viewed on the second, third, and fourth level of the structure in this photo.

Another angle of this hexagonal shaped pagoda which shows another part of the text inscribed at the top of the tower. The full message reads: "May God's Grace and Peace Be With You." 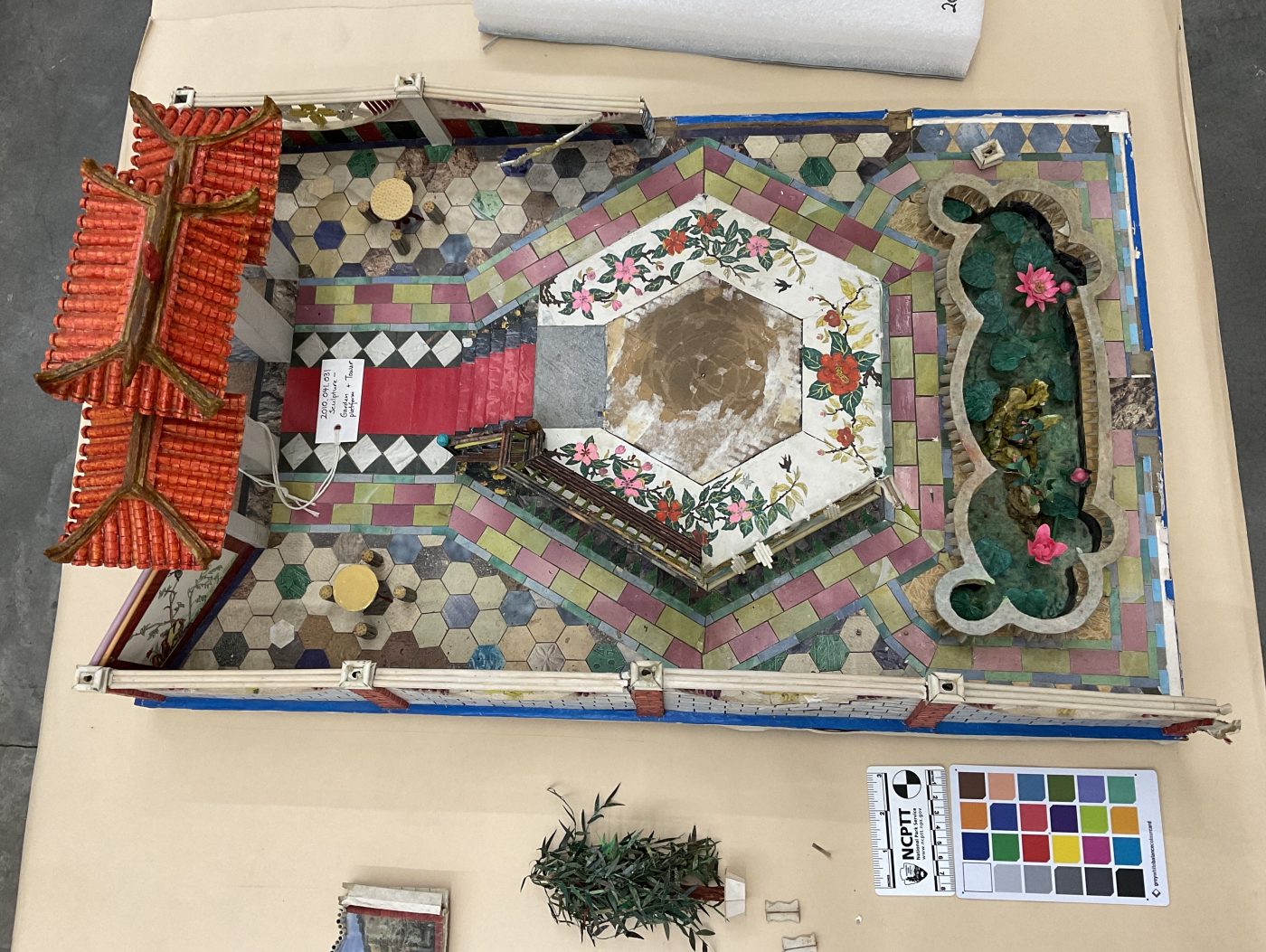 A bird's eye view of the arch entrance and garden which accompanies the pagoda tower. Click to examine the mosaic surface, the color of which has been dulled by stains and dirt. 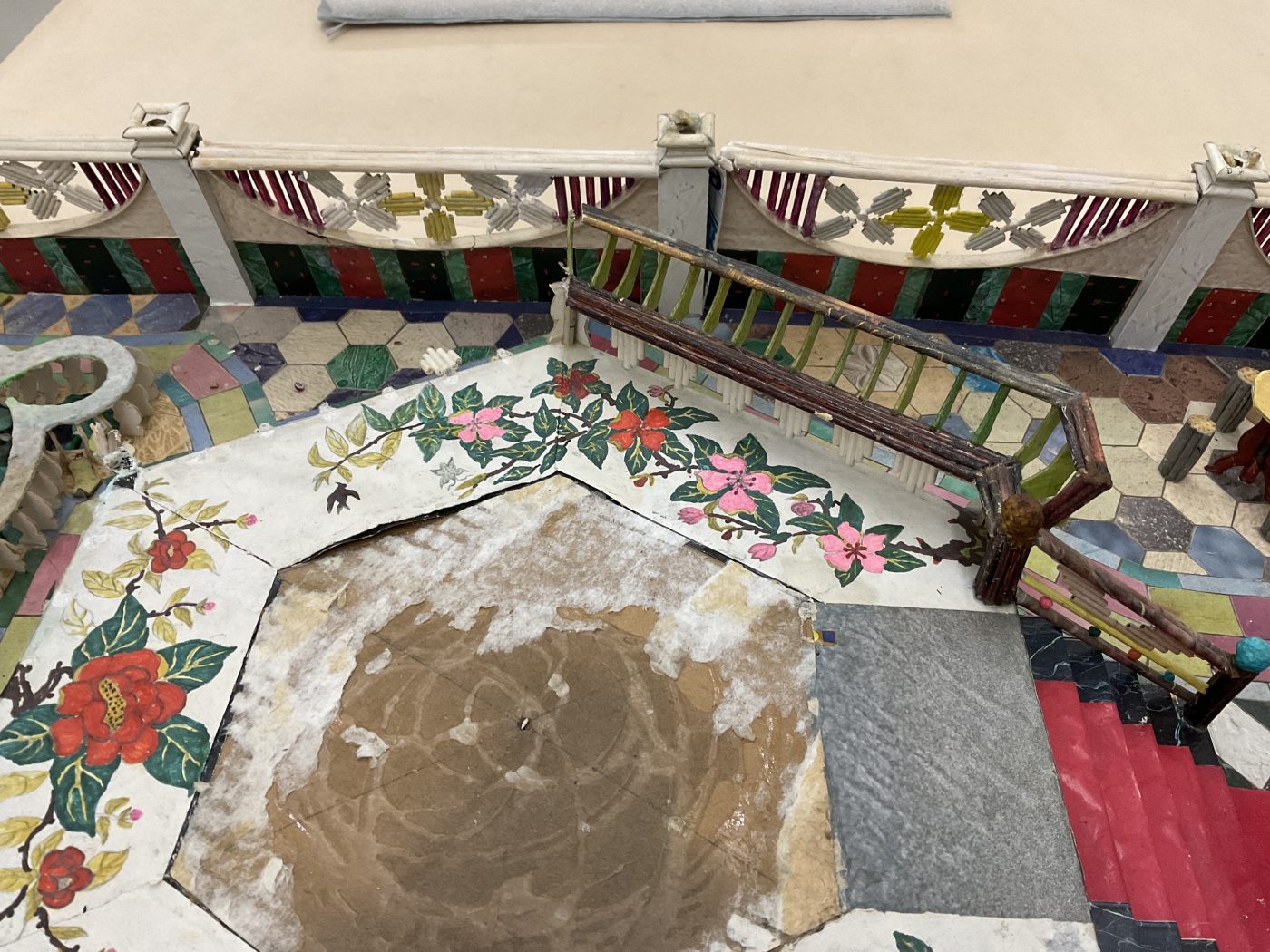 A zoomed in view of the base upon which the pagoda tower should rest. Since the brown "wooden" railing has only been preserved on one side, the missing pieces would have to be reconstructed. 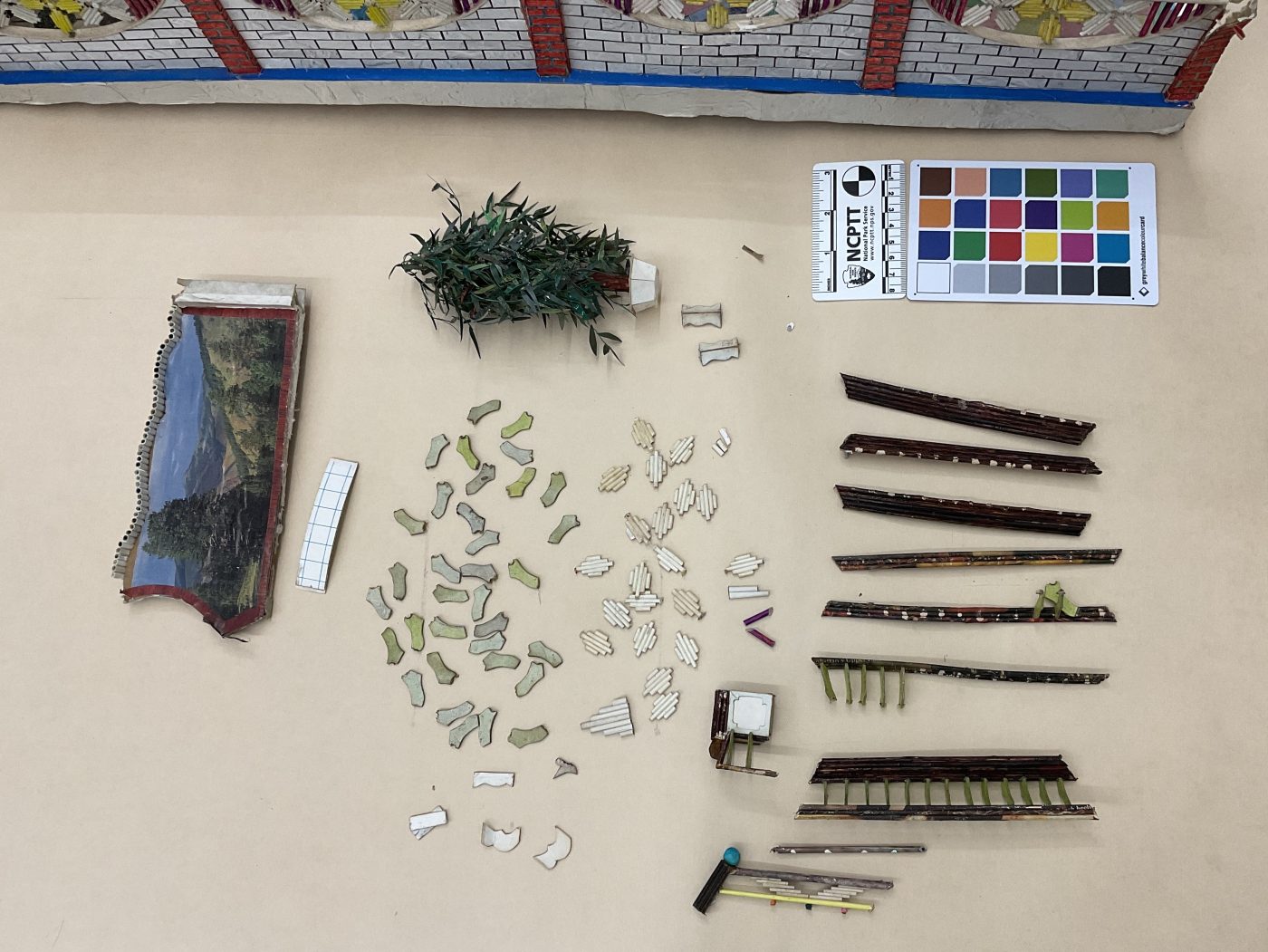 The extent of the pieces of the brown "wooden" railing and garden outer wall that was salvaged. The missing pieces would have to be reconstructed. 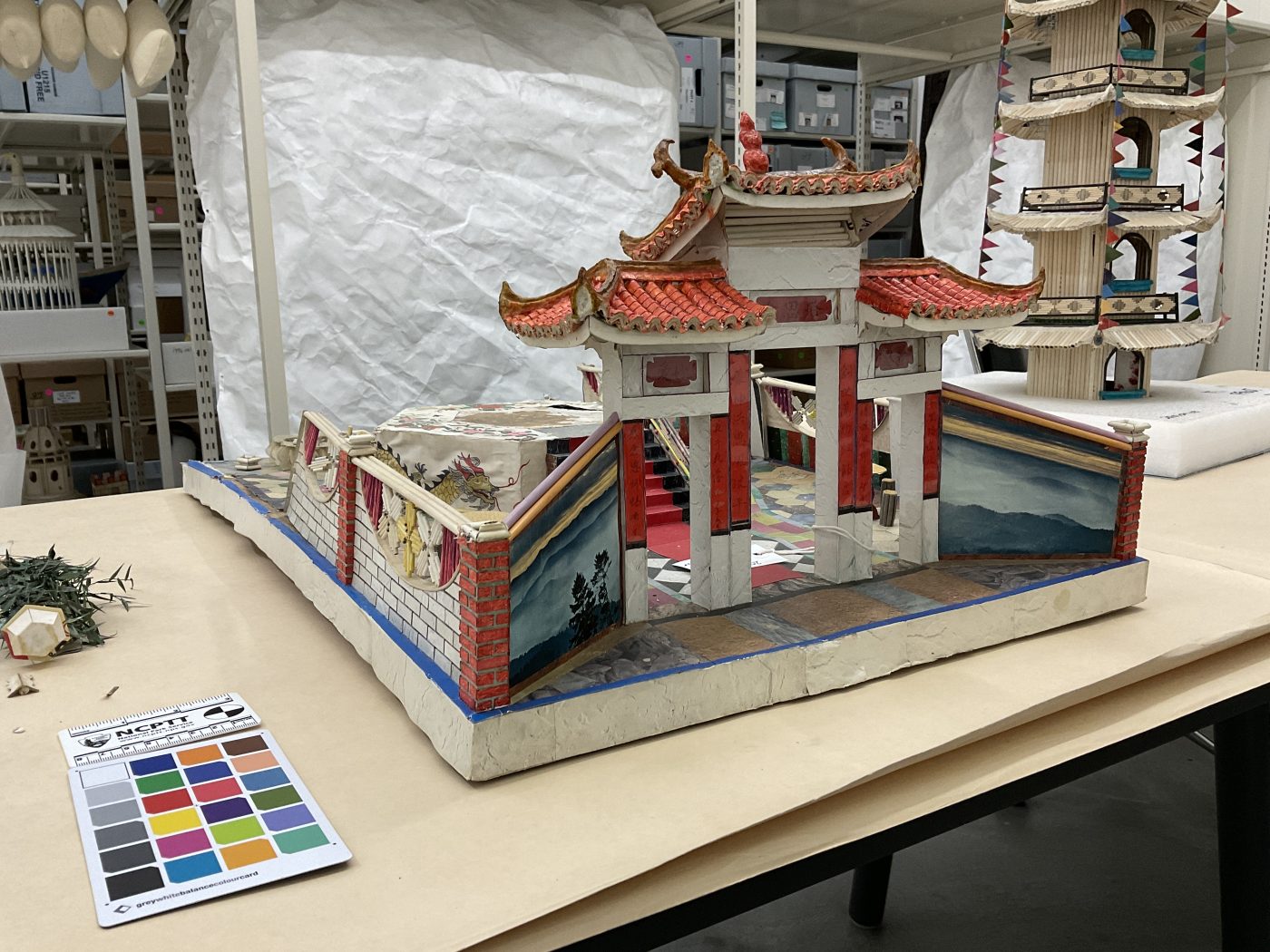 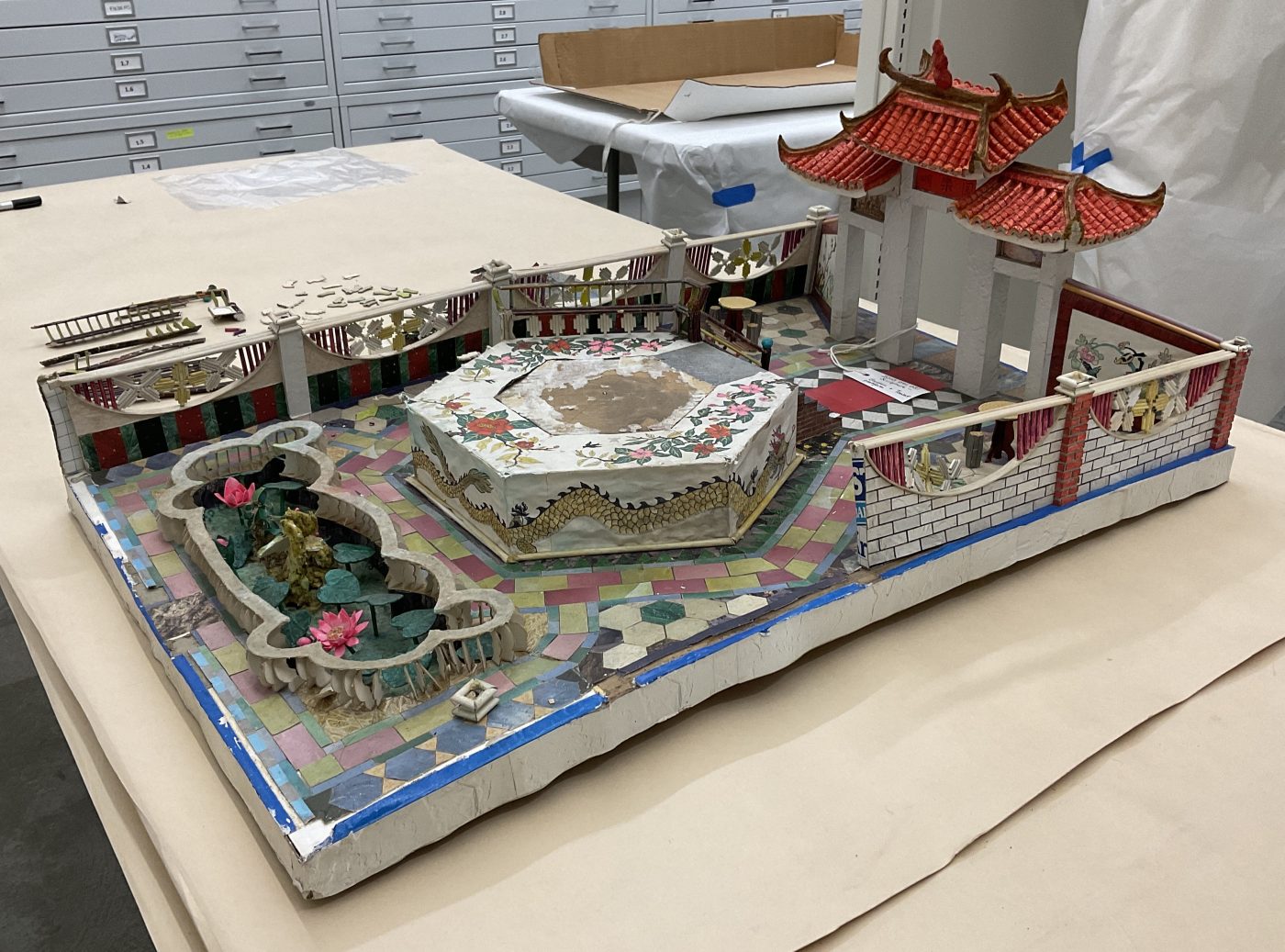 Angled view showing the damaged left and back wall, which require reconstructing. Note also the damage to the edge of the pond of pink lotuses. 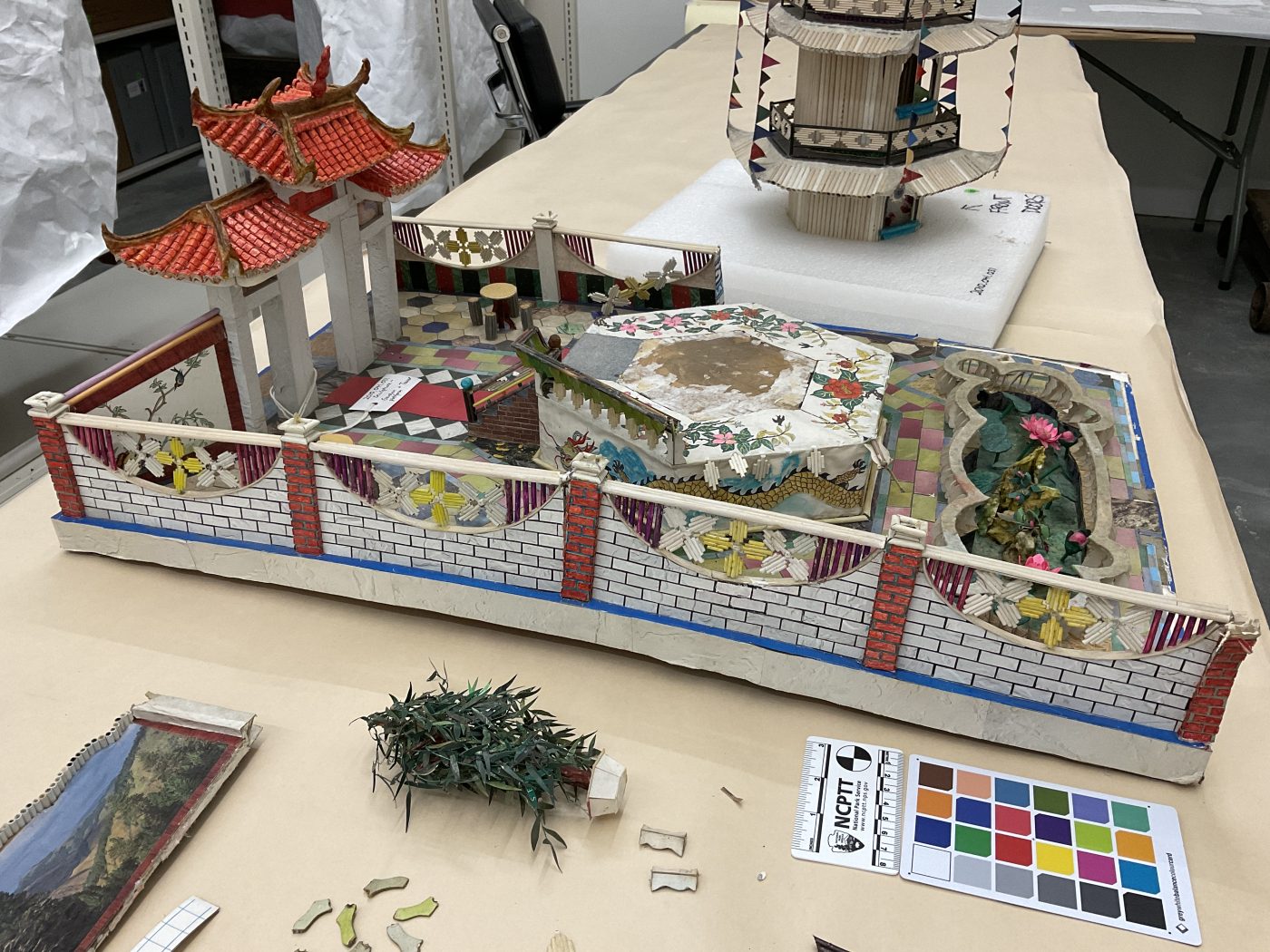 Flower and brick detailing along the right outer wall, which would have to be carefully replicated on the missing left and back walls.

The structural integrity of this large paper sculpture was heavily damaged by water used to combat the fire in 2020. It has many broken, distorted, and missing parts. There are significant stains and accretions on its decorative surfaces, especially on the accompanying arch and garden base.