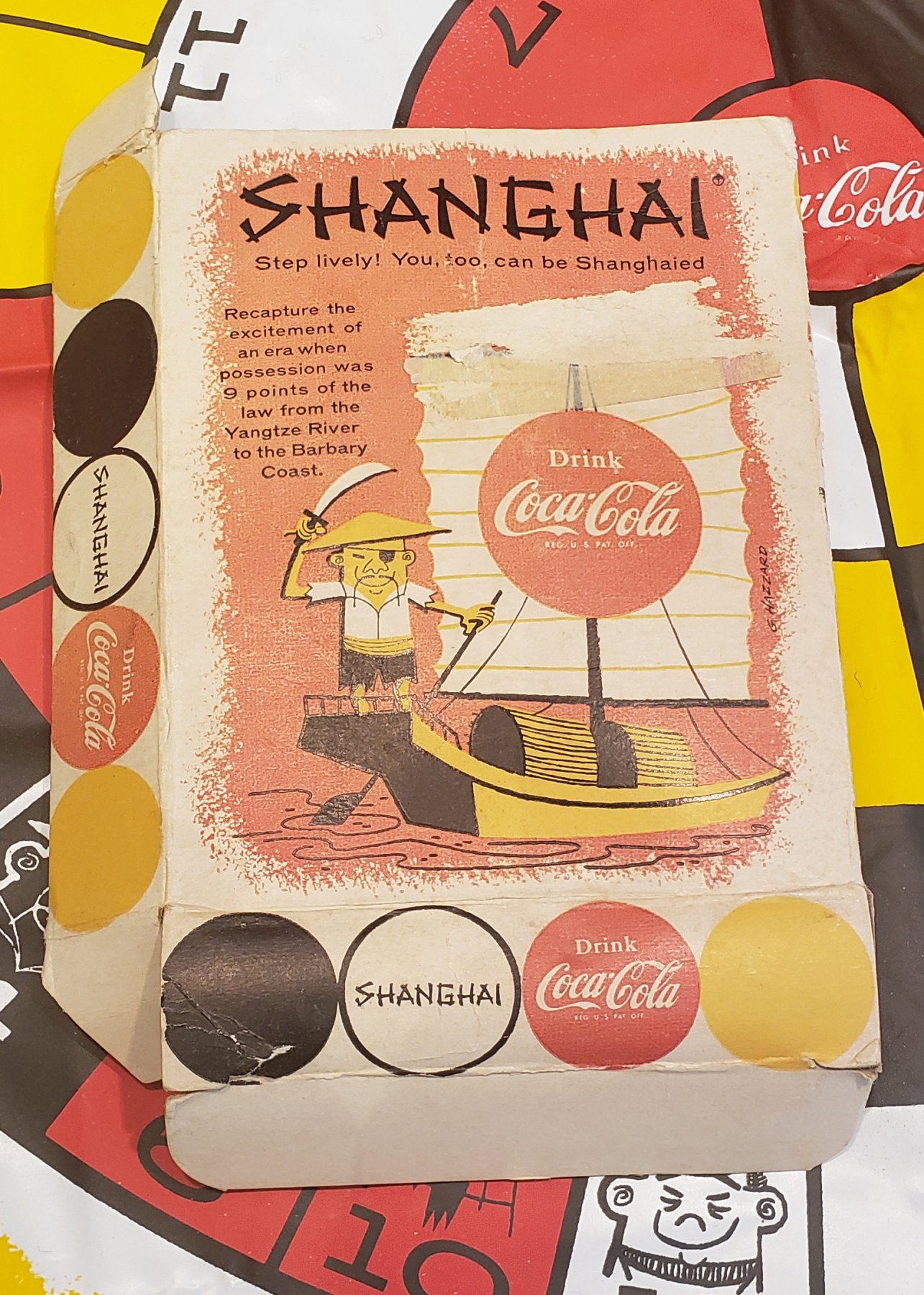 This week, we feature a Coca-Cola Company advertisement board game called Shanghai, with game mechanics revolving around capturing your opponent’s game pieces and scoring points with good dice rolls. This item was generously donated by Roy Delbyck, one of our MOCA Board Officers and a pretty regular donor of interesting materials relevant to our mission here at MOCA.

Upon looking at the board game box, one might think that it is simply a game that has a Chinese theme to it, but there is a little more to it than that. There is an underlying meaning behind the word “Shanghai” and we will be exploring that and how the game is related to the term. Before we get into the historical context of the word and how it ties to the game, let’s take a look at the contents of the game and its rules. 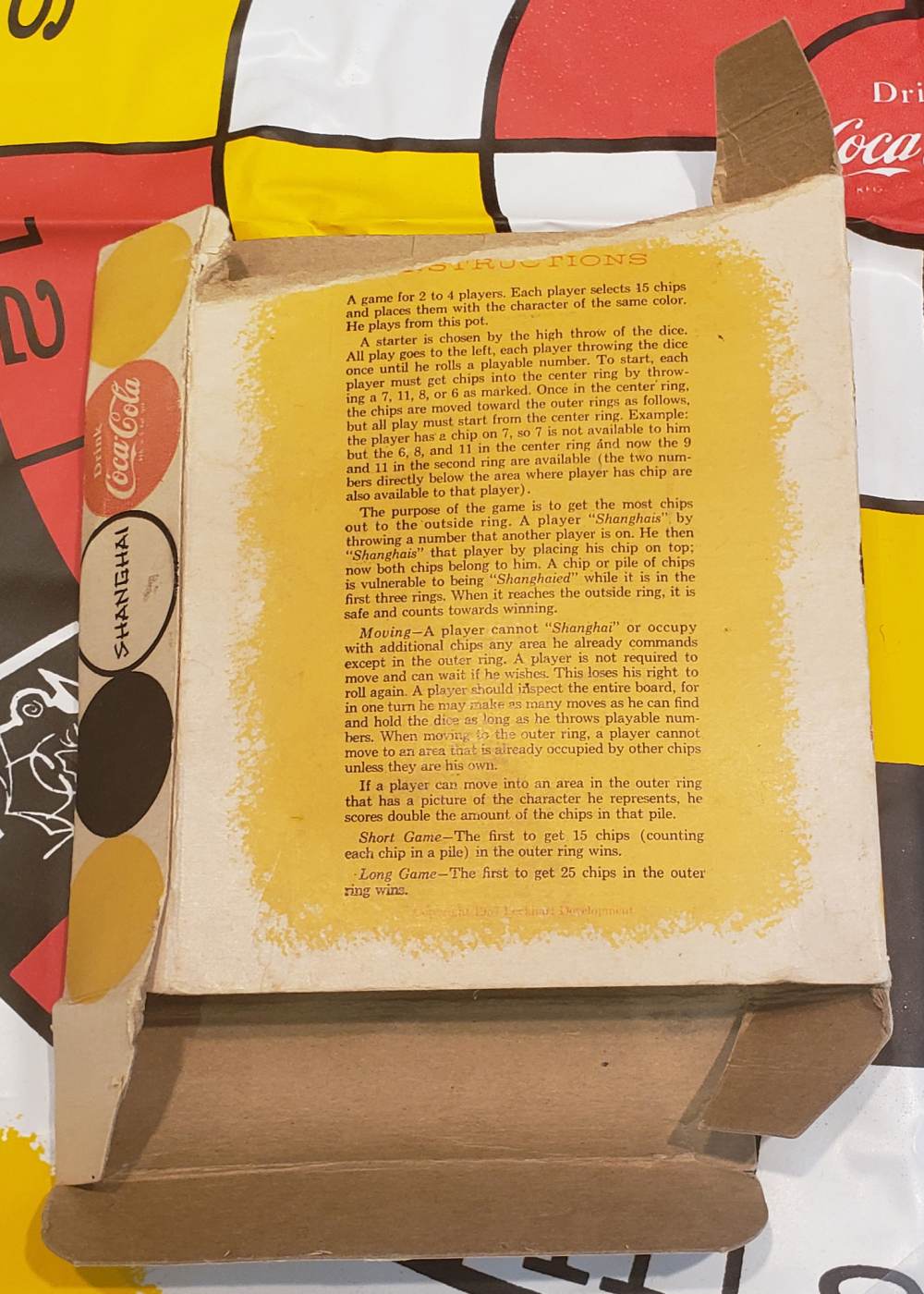 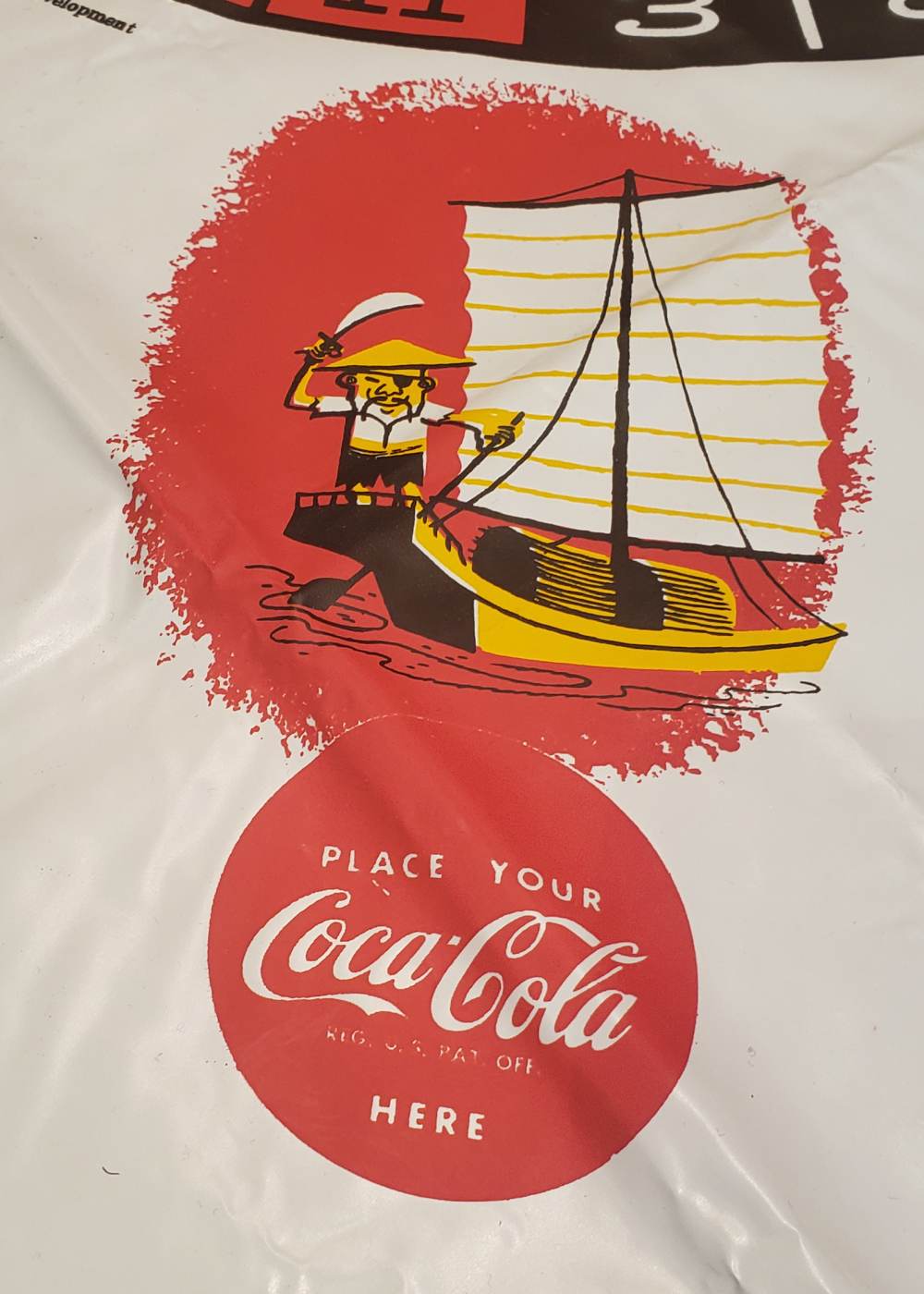 The game is packaged in a colorful cardboard box with a brief description of the rules in the back and a lot of Coca-Cola branding everywhere else. The front features a Chinese pirate(?)/Charlie Chop(?) sailing on a Chinese “Junk” ship and holding a dao or saber in one hand and rowing oar in the other. The contents of the board game include a plastic playmat, a bag of plastic chips, and two tiny dice.

Upon laying out the mat, a prospective player would be introduced to the four yellow-faced characters that they would choose to role-play as. We have Captain Wong in his sailor’s outfit and cap, Wun Lee in what looks to be a changshan, Chin Ling in some form of chef’s outfit, and Charlie Chop wearing ragged shorts and a straw hat. The MOCA staff tried to guess what it is they are supposed to represent without much success beyond Captain Wong. 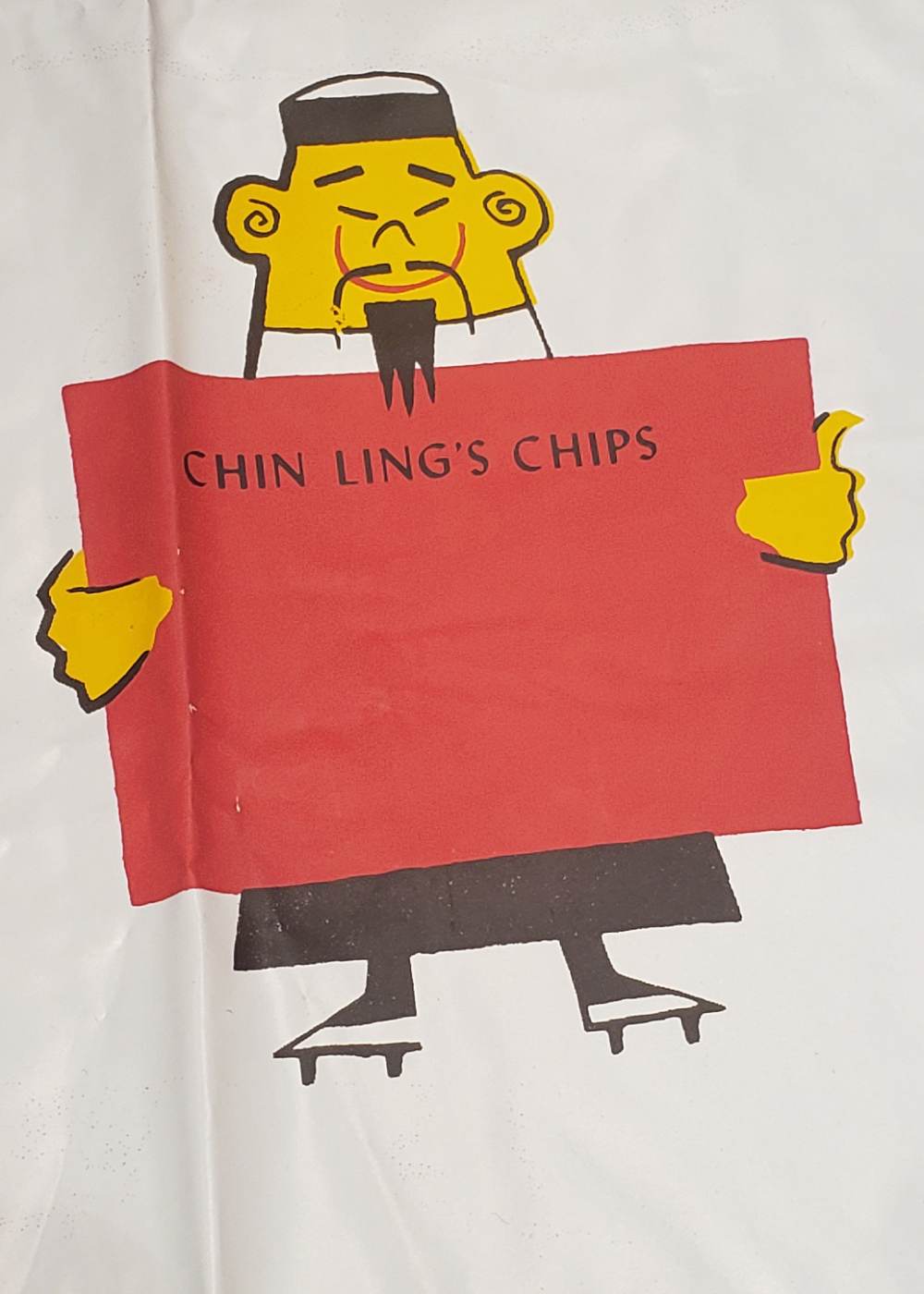 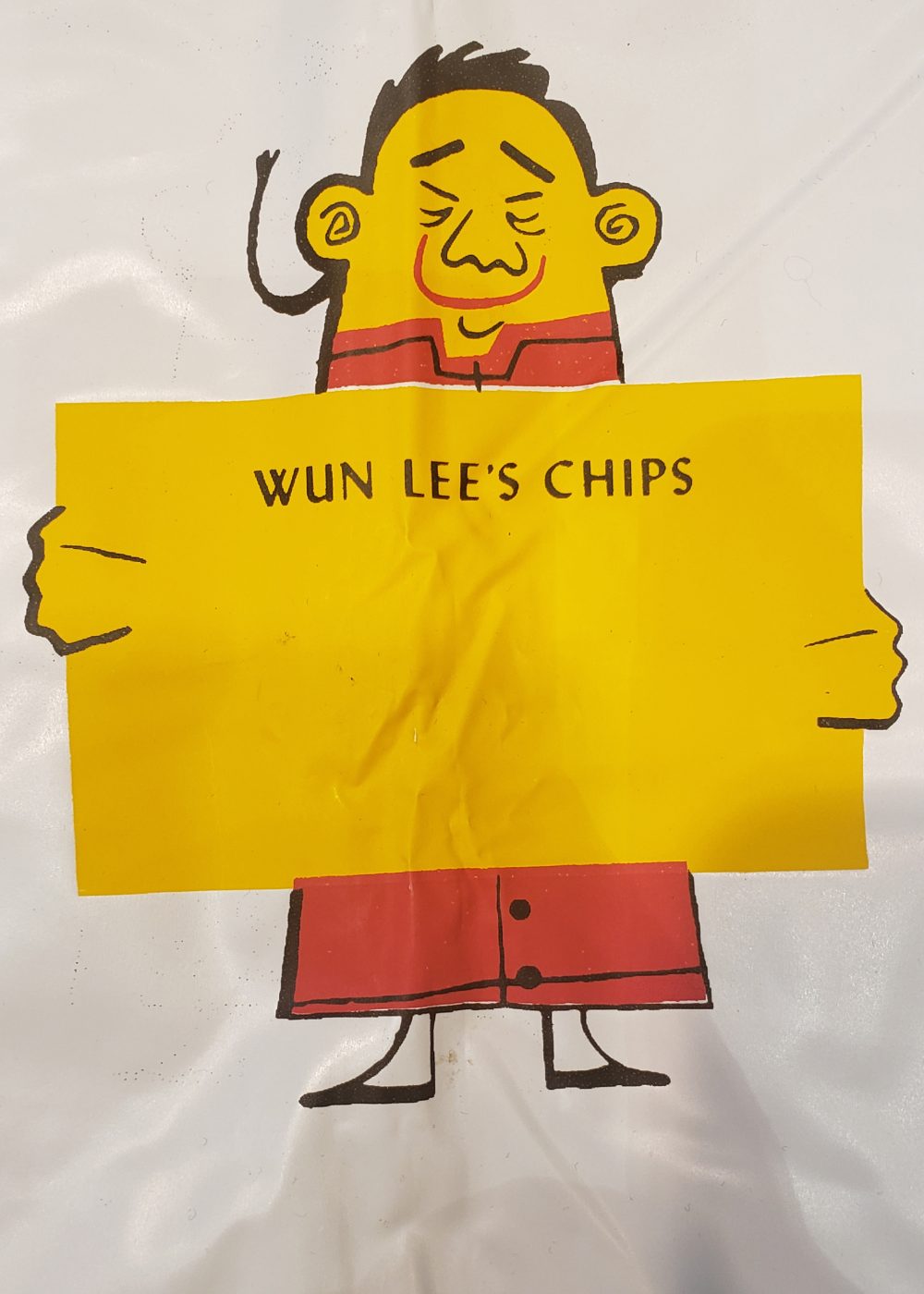 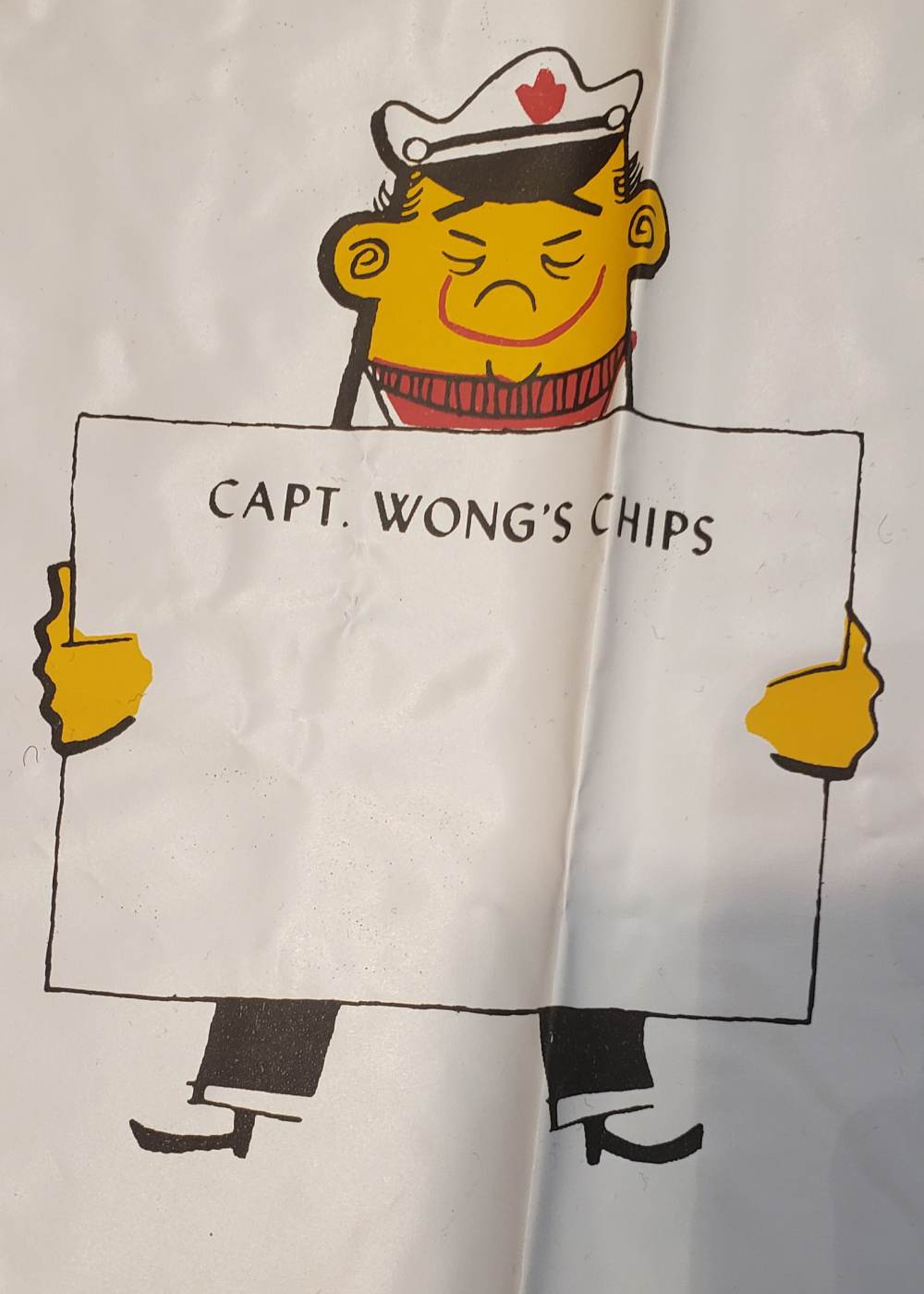 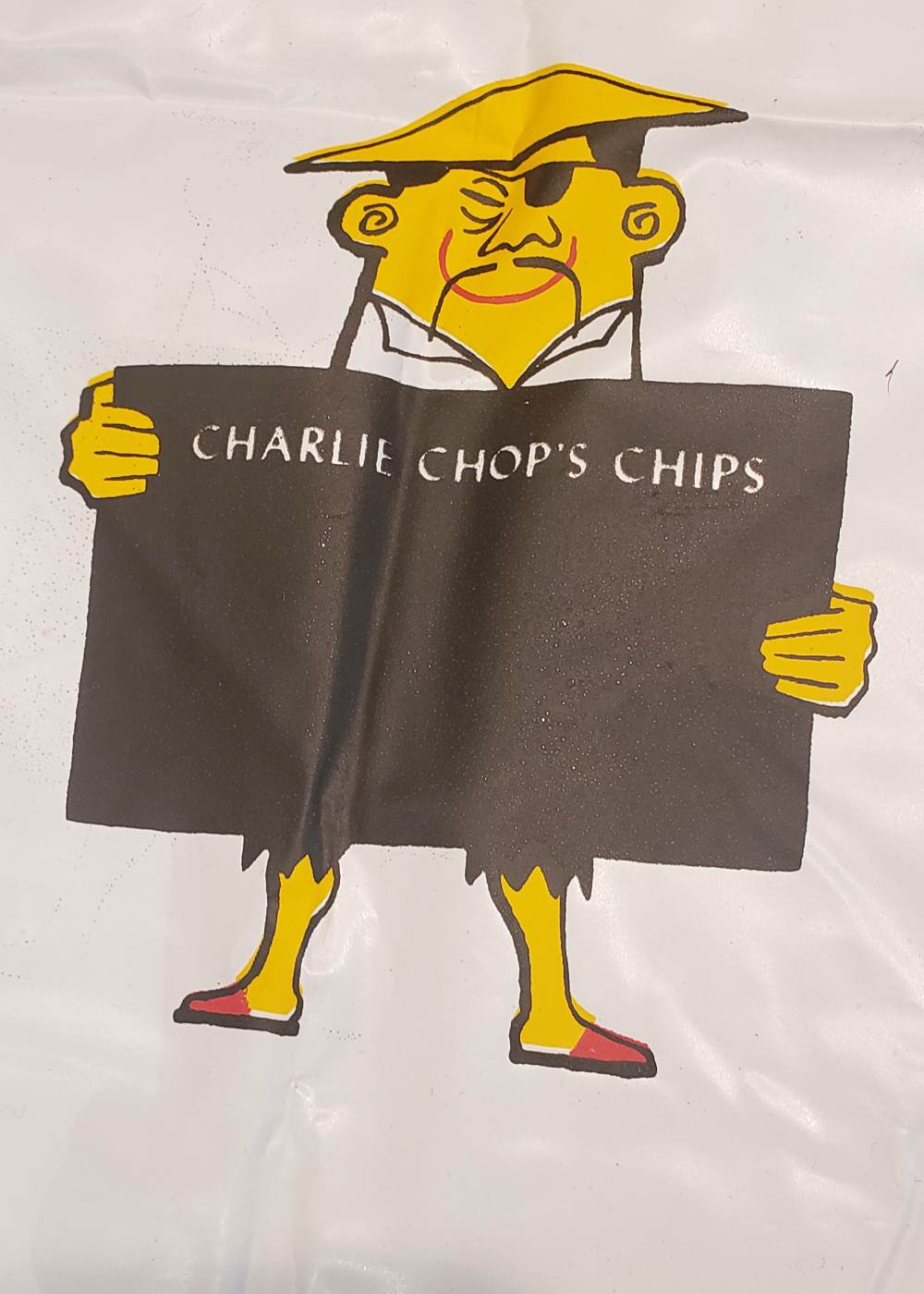 The game requires a player to toss a pair of dice to assert control over the various numbers and colors printed on them. Players must “branch out” from the center towards the outermost ring of the playmat through a series of consecutive dice rolls following the number arrangement on the mat. Players must first toss the dice to match a number in the center of the ring, and from there, the player can move the chip out and away by trying to roll the numbers that match the adjacent boxes. The ultimate goal is to migrate the chips to the outermost ring, where points are subsequently scored. The first player to get 15 chips to the outer ring wins, or if you have some more time on your hands, you can play the longer format of first to 25 chips wins.

While every player is trying to chain their chips with lucky throws, they need to be aware of other players’ dice rolls, because chips occupying space in the inner three rings are vulnerable to capture. For example, Player A rolls a 6, places a chip into the corresponding space “6”, and ends his turn. Then, Player B tosses the dice and also gets a “6”, B will place his chip on top of Player A’s chip and claim ownership of both in that space. This mechanic is known as “Shanghaiing”. 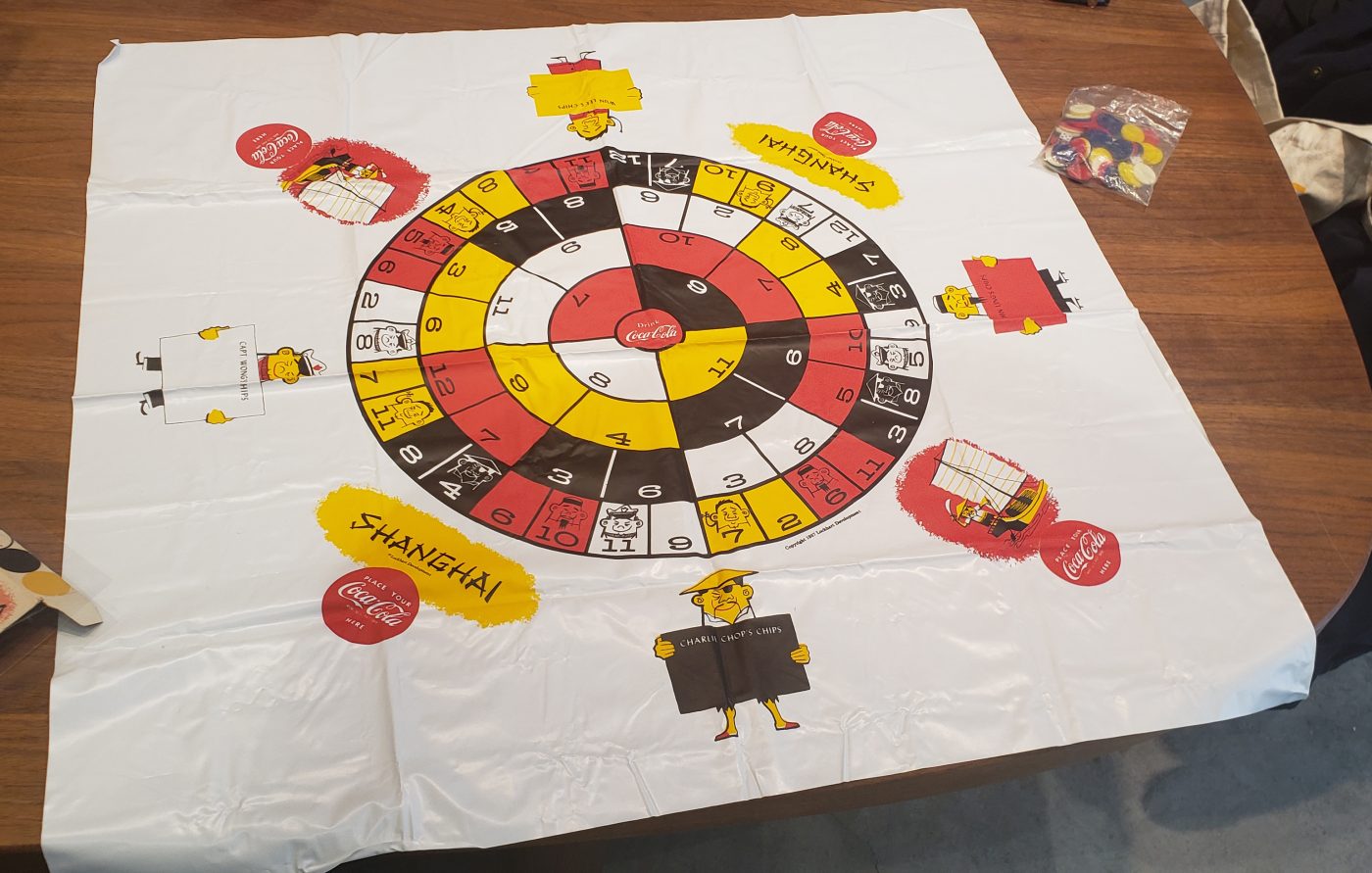 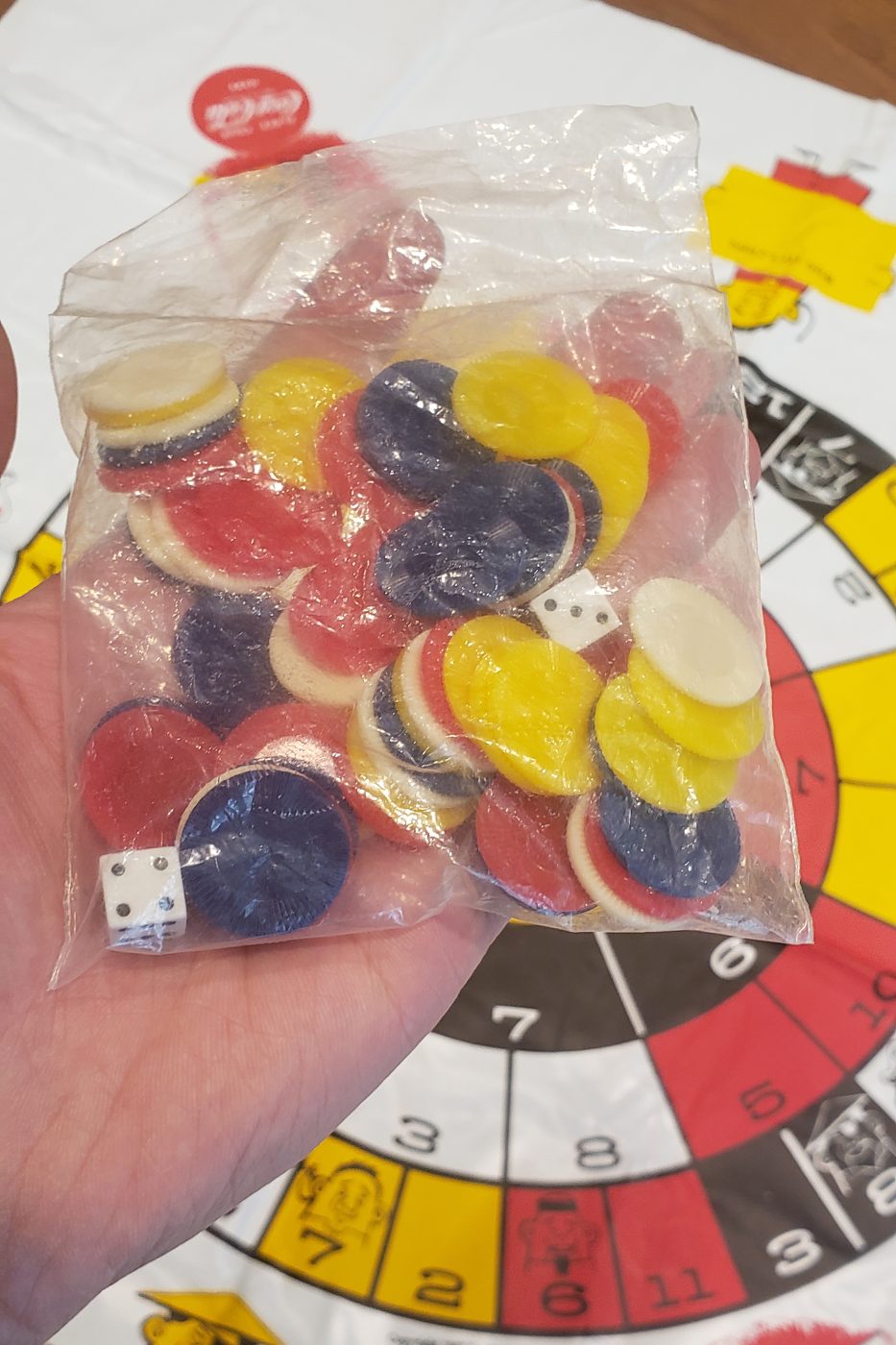 Plastic chips and dice, still in the original packaging. Courtesy of Roy Delbyck, Museum of Chinese in America (MOCA) Collection. 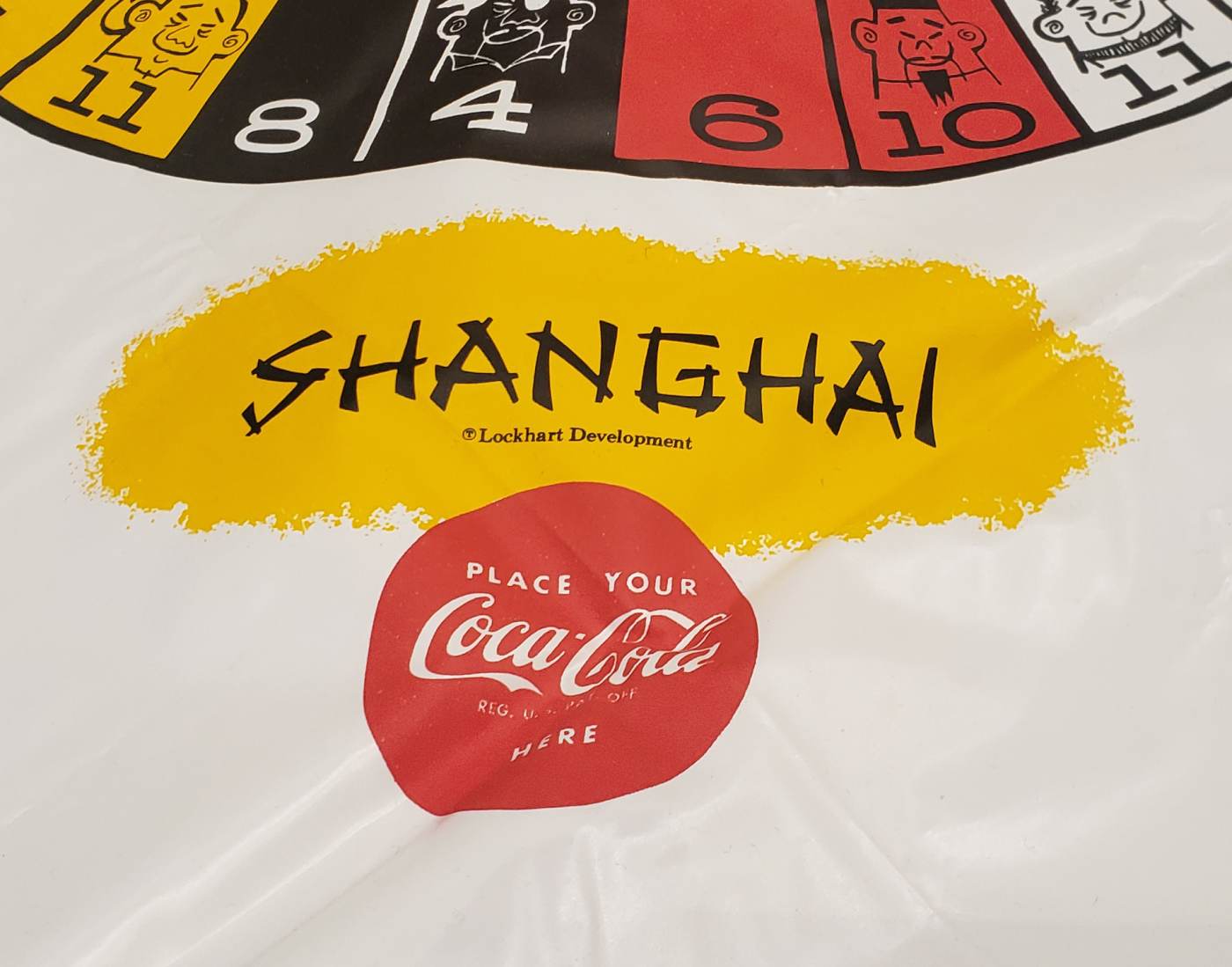 The game of Shanghai. "Place your Coca-Cola here". Courtesy of Roy Delbyck, Museum of Chinese in America (MOCA) Collection.

The term “Shanghaiing”, also known as “crimping”, can be defined as a verb used to describe the kidnapping of people to serve as sailors through violence, deceit, and/or coercion. The term showed up on Encyclopedia Britannica in their 11th edition print in 1911 and read as follows:

The term “to shanghai” is used of a more serious offence. Literally meaning “to ship to Shanghai,” in China, it is applied to the drugging or rendering unconscious by violence or other means of persons, whether sailors or not, and shipping them to distant ports, in order fraudulently to obtain money in advance of wages, or for the sake of the premium paid for supplying crews.

Having understood the format of the game and the definition of the term “to Shanghai”, one can start to draw a conclusion as to why the designers decided to call the game Shanghai.  It is a little harder to explain away the Chinese caricature and why you play as a Chinese character though, since abducted crewmen get sent to Shanghai and not the other way around. Perhaps it was a nice decorative touch of racism from the 50s? 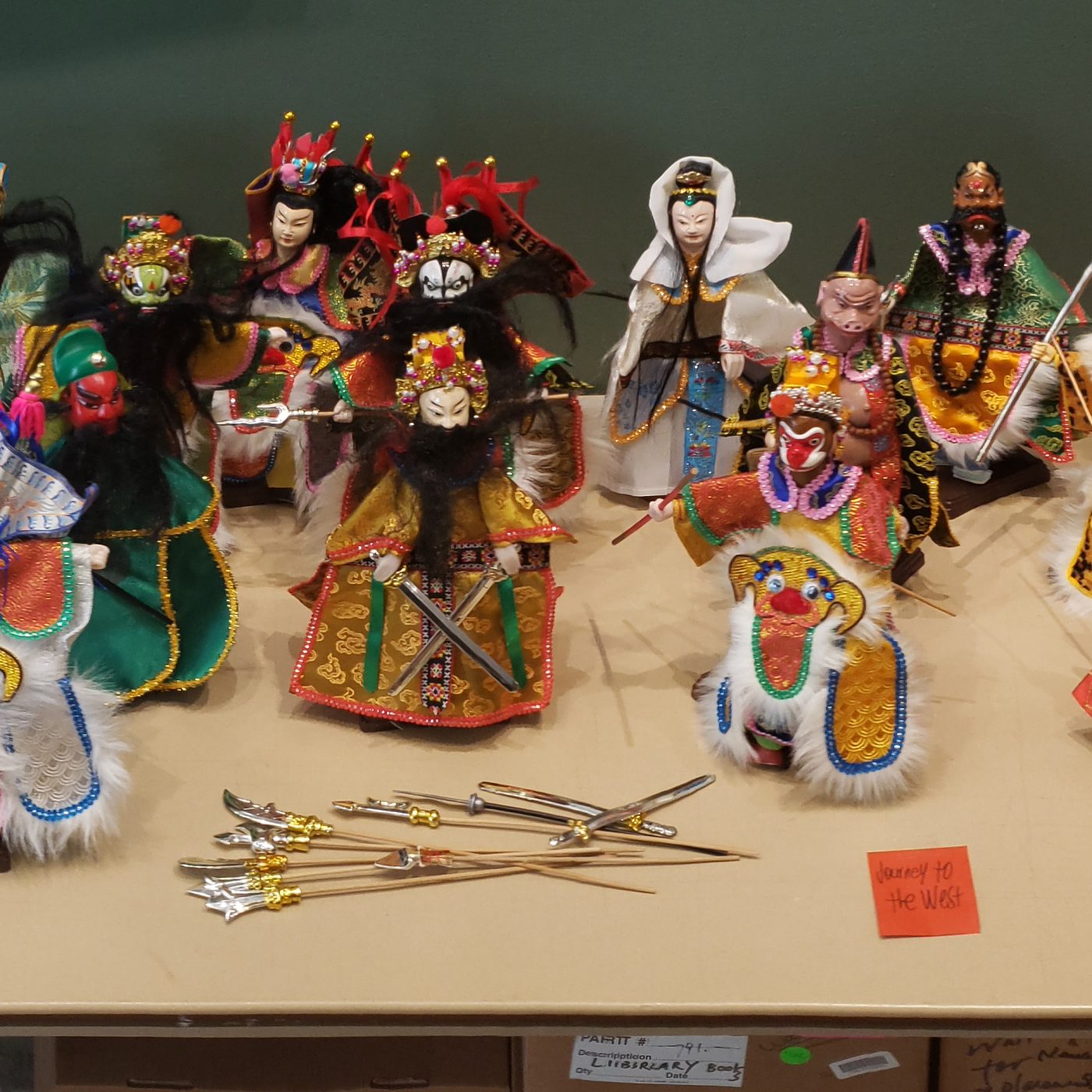