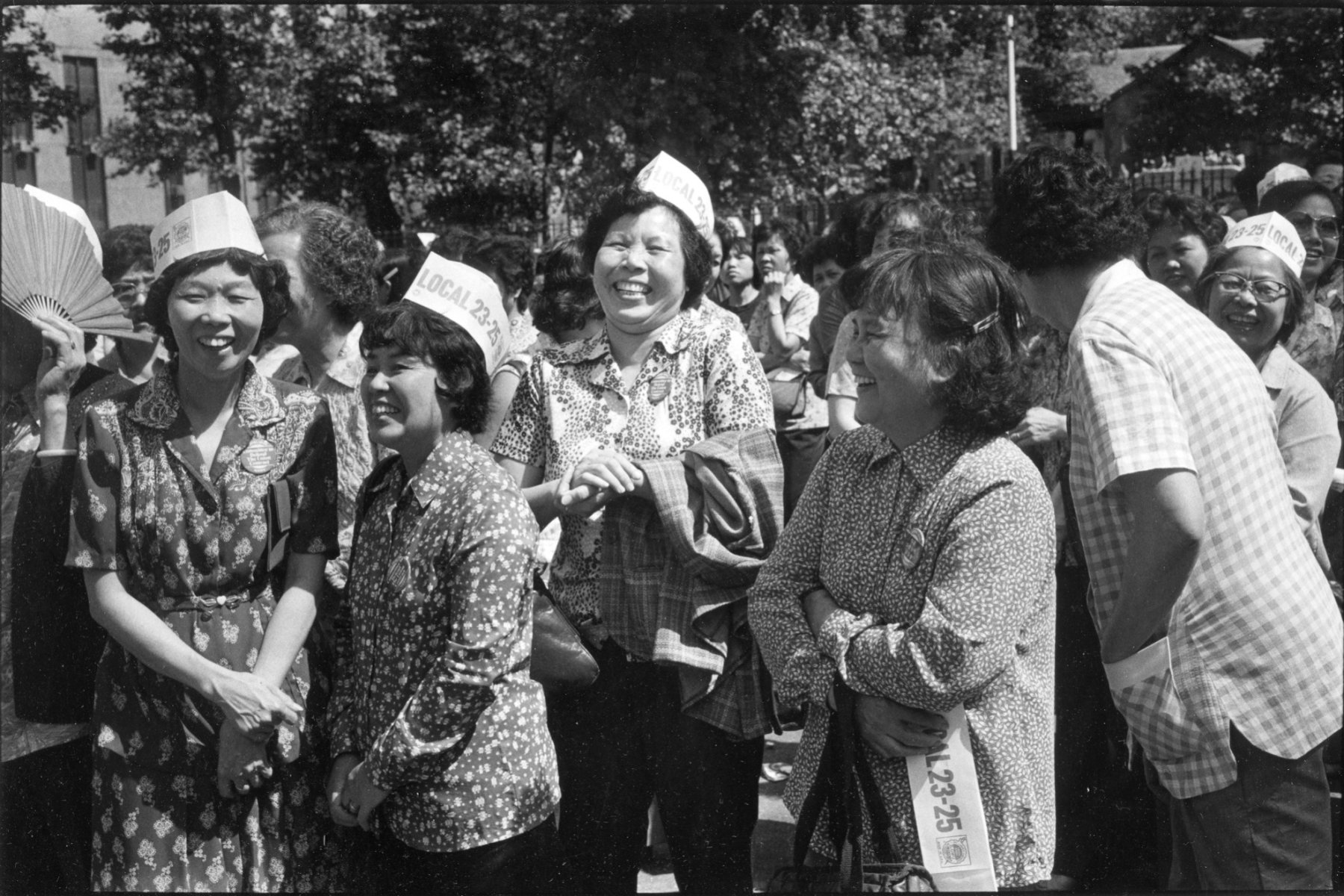 Women from Local 23-25 at the International Ladies’ Garment Workers’ Union (ILGWU) garment workers’ rally in Columbus Park in 1982. Photograph by Paul Calhoun. MOCA Collections. The scale is hard to discern from the close-up range of this photograph, but as many as 20,000 garment workers and their supporters marched and gathered in Columbus Park on June 24th and July 25th, 1982, in two of the largest demonstrations of worker unity and collective strength in New York Chinatown history.

Until the 1960s and 1970s, Manhattan’s Chinatown was largely a “bachelor society” where men vastly outnumbered women. As women from China and Hong Kong began to immigrate in larger numbers, they provided the workforce for a huge Chinatown garment industry, inheriting the union forged by generations of Jewish, Italian, African-American, Puerto Rican, and Latinx women. In 1982, some Chinatown employers refused to renew the union contract, thinking that Chinese women would be afraid to take action. WE ARE ONE was the rallying cry during the brief and successful strike in the summer of 1982 when 20,000 Chinese immigrant members of Local 23-25 of the International Ladies’ Garment Workers’ Union (ILGWU) stood together for their union contract. Two major rallies in Columbus Park in Chinatown resulted in a successful settlement of the contract. Additionally, new leaders emerged among the workers who contributed greatly to the union as well as to community campaigns for health and childcare, voter registration, political action and other fights for community services and justice. The extraordinary outpouring of solidarity and energy by the Chinese immigrant women workers in 1982 wrote new pages in labor and community history.

In commemoration of this historic event and in recognition of Labor Day, MOCA cordially invites you to join this virtual panel discussion to reflect on the 1982 Garment Workers Strike.

Moderated by beloved Community Organizer May Ying Chen, esteemed panelists Rachel Bernstein, Director of LaborArts, June Jee, Community Affairs Consultant, and Mae M. Ngai, Lung Family Professor of Asian American Studies and Professor of History, and Co-Director of the Center for the Study of Ethnicity and Race at Columbia University, will discuss the history and importance of garment workers in Chinatown in the 1980s and 1990s, unpack issues involving the union and workers’ labor rights and women’s activism, illustrate the economic impact of the garment industry on Asian American communities, remember stories and oral histories from a large number of families and children who grew up in these garment worker households. 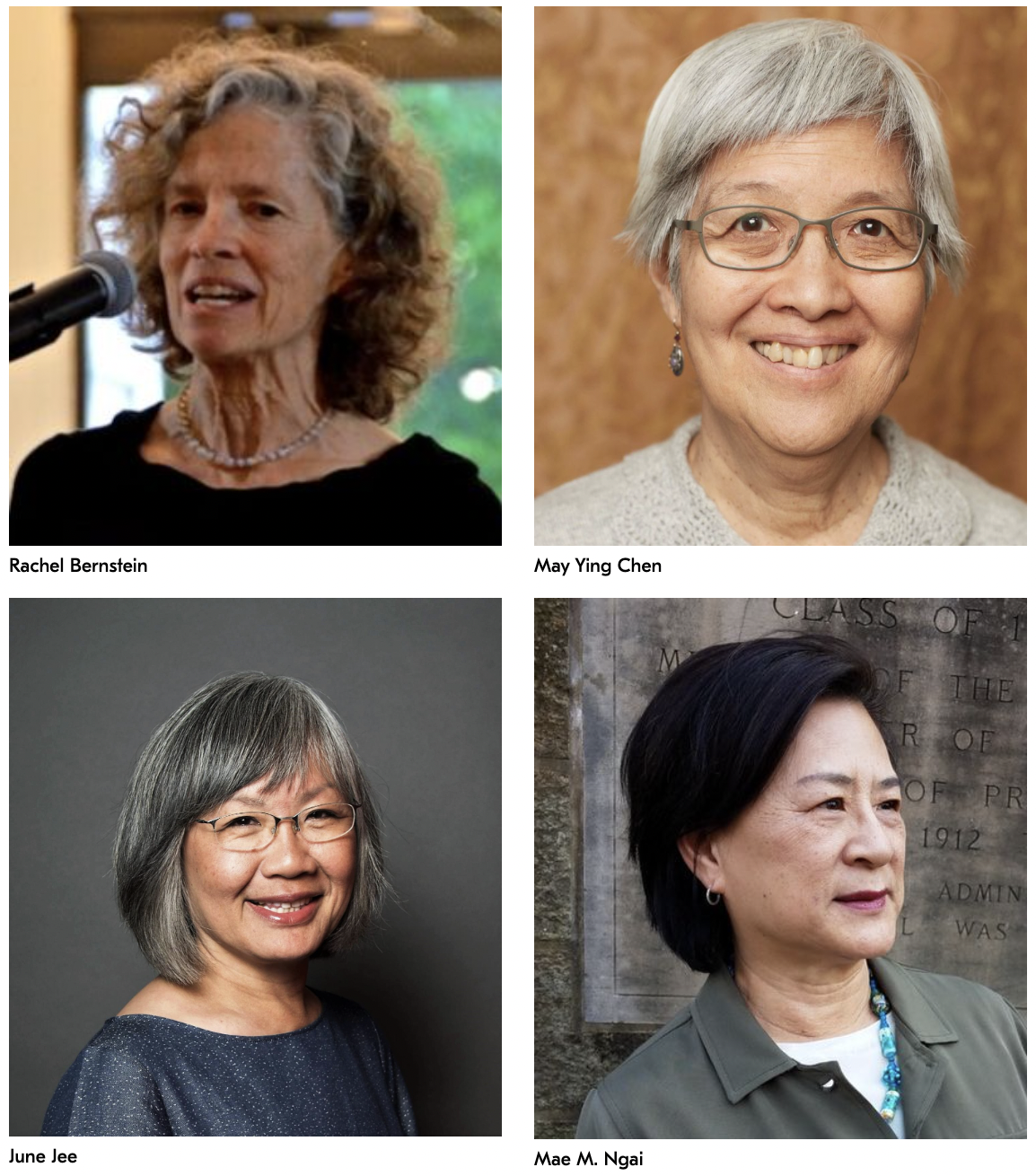 Rachel Bernstein researches and teaches American working class history, with a particular focus on New York City. She directs LaborArts, a non-profit using art, images and events to bring a broad audience to this often overlooked history. She taught in the graduate program in public history at NYU for 25 years, and continues to work on public history projects with NYU’s Tamiment Library/Robert F. Wagner Labor Archives and at Brooklyn College’s Graduate Center for Worker Education. She is author, with the late Debra E. Bernhardt, of Ordinary People, Extraordinary Lives: A Pictorial History of Working People in New York City (NYU Press, 2000, 2020), and with Bernhardt, Evelyn Jones Rich, Esther Cohen, Donald Rubin and the late Henry Foner, co-founded LaborArts in 2000.

May Ying Chen devoted a long career to the garment workers’ union in New York City. Until her retirement in 2009, she was the Manager of Local 23-25 and Vice President of the International Union–working on union contracts, worker benefits, worker education programs and political and voter registration campaigns. She was a founding member of the AFL-CIO’s Asian Pacific American Labor Alliance (APALA). As a retiree, she continues to support projects related to organizing and educating workers with CUNY School of Labor and Urban Studies, LaborArts, Remember the Triangle Fire Coalition, Tenement Museum, Museum of Chinese in America, and W.O.W. (Wing on Wo) Project. May and her family are long-time Chinatown residents.

June Jee is currently a community affairs and strategic partnership consultant as well as a volunteer for many community organizations. Prior to this, June was Director of Government and External Affairs at Verizon. In addition, she was also responsible for philanthropic strategies, grant-making, and initiatives in the Verizon Foundation’s priority areas. As an active member and volunteer in the community, June currently serves on various boards to include the Museum of Chinese in America, Chinatown Partnership Local Development Corporation, United East Athletics Association, Organization of Chinese Americans (OCA-NY), and Asian Pacific American Institute for Congressional Studies.

Mae M. Ngai is Lung Family Professor of Asian American Studies and Professor of History, and Co-Director of the Center for the Study of Ethnicity and Race at Columbia University. She received her PhD from Columbia in 1998. She is a U.S. legal and political historian interested in questions of immigration, citizenship, and nationalism. She is author of the award-winning Impossible Subjects: Illegal Aliens and the Making of Modern America (2004); The Lucky Ones: One Family and the Extraordinary Invention of Chinese America (2010); and The Chinese Question: The Gold Rushes and Global Politics (2021), which won the 2022 Bancroft Prize and was a finalist for the LA Times book prize in history. She has been a Guggenheim Fellow and has received fellowships from the Institute for Advanced Study, the Cullman Center for Scholars and Writers at the NY Public Library, and the Library of Congress, among others. Ngai has written on immigration history and policy for the Washington Post, New York Times, Los Angeles Times, the Atlantic, and the Nation. Before becoming a historian she was a labor-union organizer and educator in New York City. She is now writing Nation of Immigrants: A Short History of an Idea (forthcoming from Princeton University Press).

MOCA has been creating new digital content through multiple platforms, always free of charge—because history matters. We hope you’ll consider making a gift to become part of a continuing lifeline for MOCA. No amount is too little and we greatly appreciate your generosity. Your contribution helps sustain our beloved institution and supports the creation of new, online programming that will bring comfort and inspiration to more communities.

This program is also supported, in part, by public funds from the New York City Department of Cultural Affairs  , in partnership with the City Council.