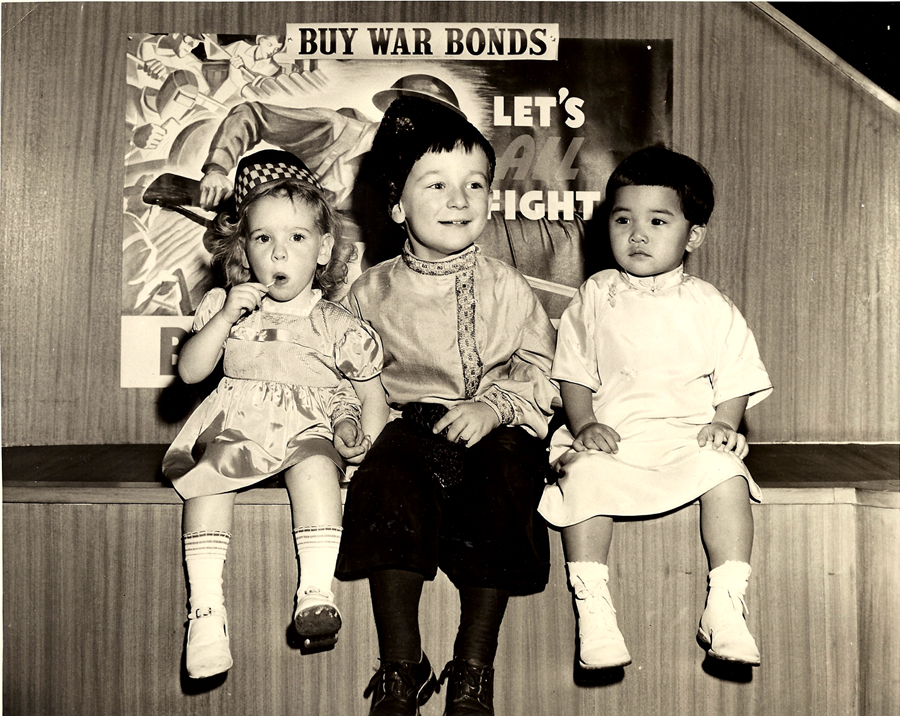 2004.029.007 Three children—one Scottish, one Russian, and one Chinese—were chosen by artist Margery Ryerson to be models for paintings to be used by the Ninth Federal Savings and Loan Association at 1457 Broadway, New York, NY to boost the sale of war bonds. The children are, from left to right: Susan Murray, of Stillwell Avenue, Brooklyn; Andriusha Branitzka, of 57th Street, Manhattan; and Virginia Chin (née Lee), of 73 Mulberry Street, Manhattan. Photograph taken by Larry Gordon. Courtesy of Virginia S. Chin, Museum of Chinese in America (MOCA) Collection.

Transitioning to war production to serve as the Allied Forces’ “Arsenal of Democracy” required mass mobilization and sacrifice from every person and local community on the home front. Many in the New York Chinatown community had family in China and had been supporting the defense of their homeland against Japanese aggression since the 1930s. As such, they had a particularly personal and heavy stake in the outcome of World War II, and as the following photographs document, made significant contributions to the war effort. Even babies played a part, as did Virginia Chin (née Lee) of 73 Mulberry Street (seated right), who was one of three children chosen by artist Margery Ryerson to be models for paintings used by the Ninth Federal Savings and Loan Association to boost the sale of war bonds.

War production induced shortages necessitated not only rationing of consumer products but also citizen participation in salvaging and recycling a wide range of previously discarded material. Chinese American families in New York such as the Liu’s depicted in the newspaper clipping answered Uncle Sam’s call for used kitchen fats for conversion into glycerine for explosives, while Chinatown Boy Scout Troop 150 “performed its generous share in all the salvage campaigns to aid the war effort,” including collecting waste paper, metal, and rubber, as well as gathering old records and books for use by the Army and Navy.

Chinese American women such as Helen Typond assumed the role of a “Rosie the Riveter,” operating a lathe metalworking machine at a Nassau County war plant visited by Madame Chiang Kai-Shek in 1943. They also donned American Women’s Voluntary Services (AWVS) uniforms, and as part of that organization, gave generously of their time to sell war bonds, staff the American Red Cross, work in emergency soup kitchens, serve as message couriers, and aid in fire fighting.

Chinese American New Yorkers also fundraised considerable amounts to aid soldiers and civilians in China. The last two photographs depict two such efforts. In the second to last, Marilyn Chu, who was 9 years old at the time, stands in-between Mayor Fiorello LaGuardia (right) and Dr. Tsune-chi Yu, the Chinese Consul General in New York City. She points to the third week on a calendar of April, 1942, helping to promote a week set aside as CHINA WEEK, during which the city planned to raise $1,750,000 for China. The last photograph shows a bird’s eye view of marchers on Mott Street in February 1943 carrying a giant Chinese national flag in a “Bowl of Rice” parade raising funds for children affected by the war against Japan in China.

In addition to these contributions on the home front, nearly 14,000 or 22 percent of all men of Chinese descent in the United States fought in the U.S. armed forces during World War II. 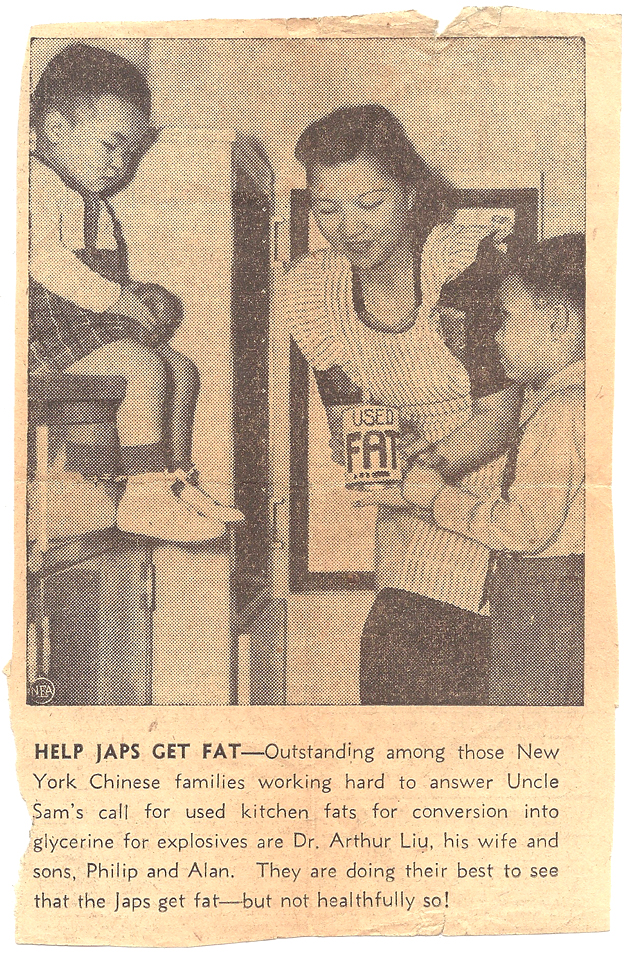 004.050.191 Clipping of WWII propaganda regarding Chinese American families. The photograph caption reads: "Outstanding among those New York Chinese families working hard to answer Uncle Sam's call for used kitchen fats for conversion into glycerine for explosives are Dr. Arthur Liu, his wife and sons, Philip and Alan. They are doing their best to see the Japs get fat - but not healthfully so!” Courtesy of Loretta Chin, Museum of Chinese in America (MOCA) Collection. 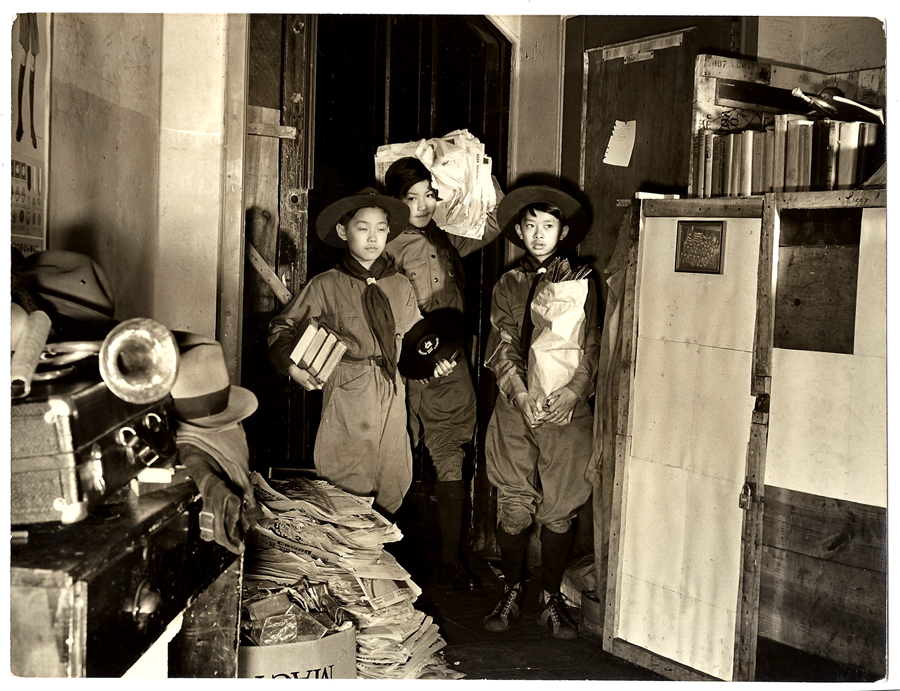 2004.026.010 A WWII propaganda photograph supplied by International News Photos for release on October 11, 1942. The accompanying caption reads: “Salvagers.... Troop 150 has performed its generous share in all the salvage campaigns to aid the war effort. They have collected waste paper, metal, rubber, etc. And have also gathered in old records and books for the Army and Navy. Performances of their band provide part of the expenses for the annual camp.” Photograph taken by Sonnee Gottlieb. Courtesy of Kenneth & Helen Chan, Museum of Chinese in America (MOCA) Collection. 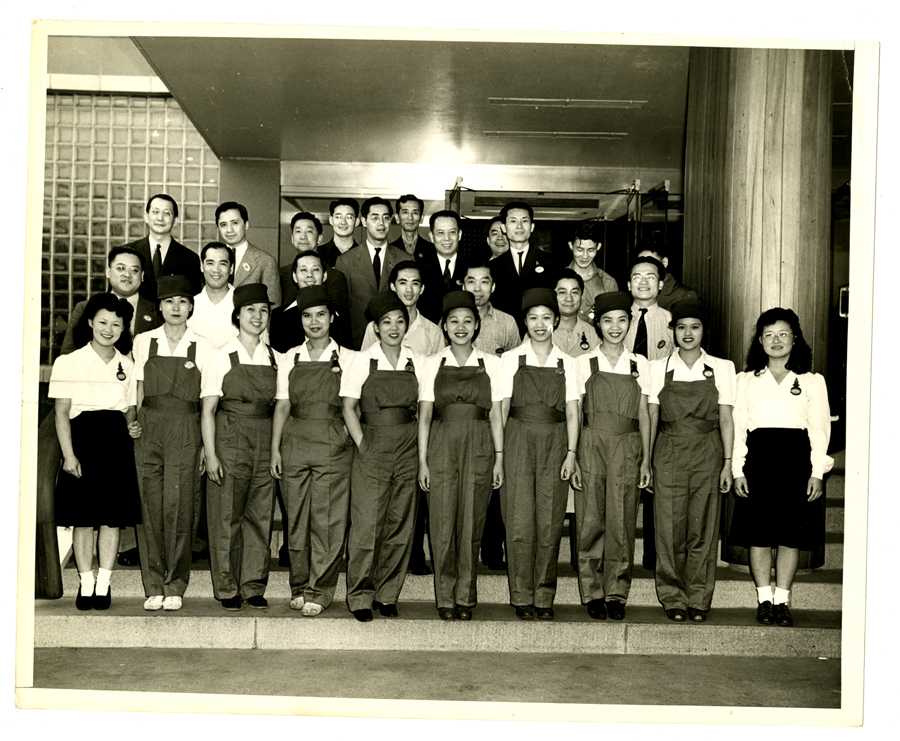 2015.037.541 Group photograph of the Chinese American employees of a war plant where Madame Chiang Kai-shek visited in Nassau [County?] in 1943. Courtesy of Douglas J. Chu, Museum of Chinese in America (MOCA) Collection. 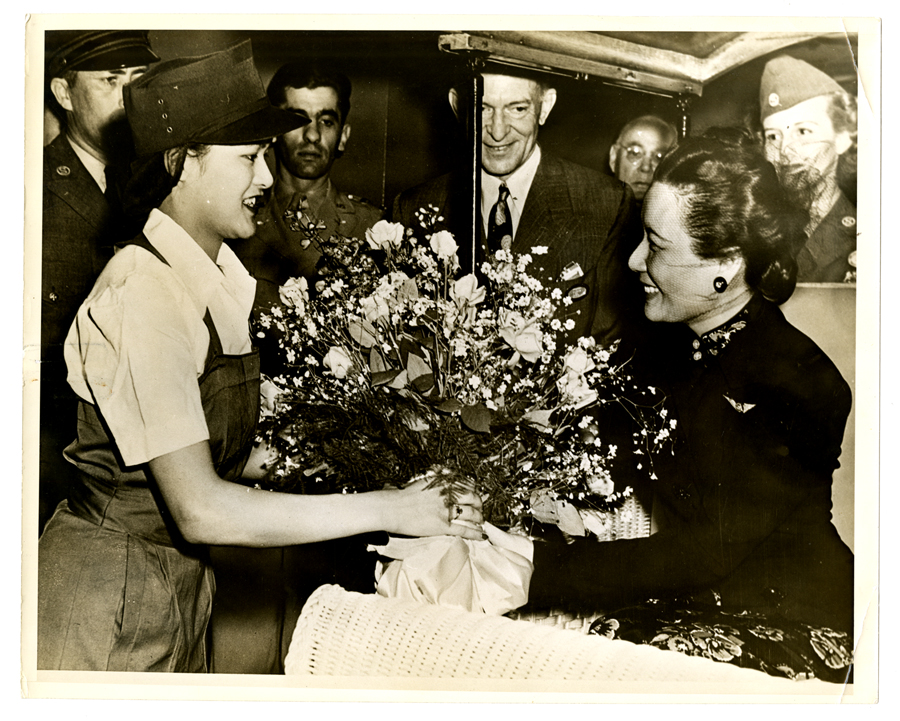 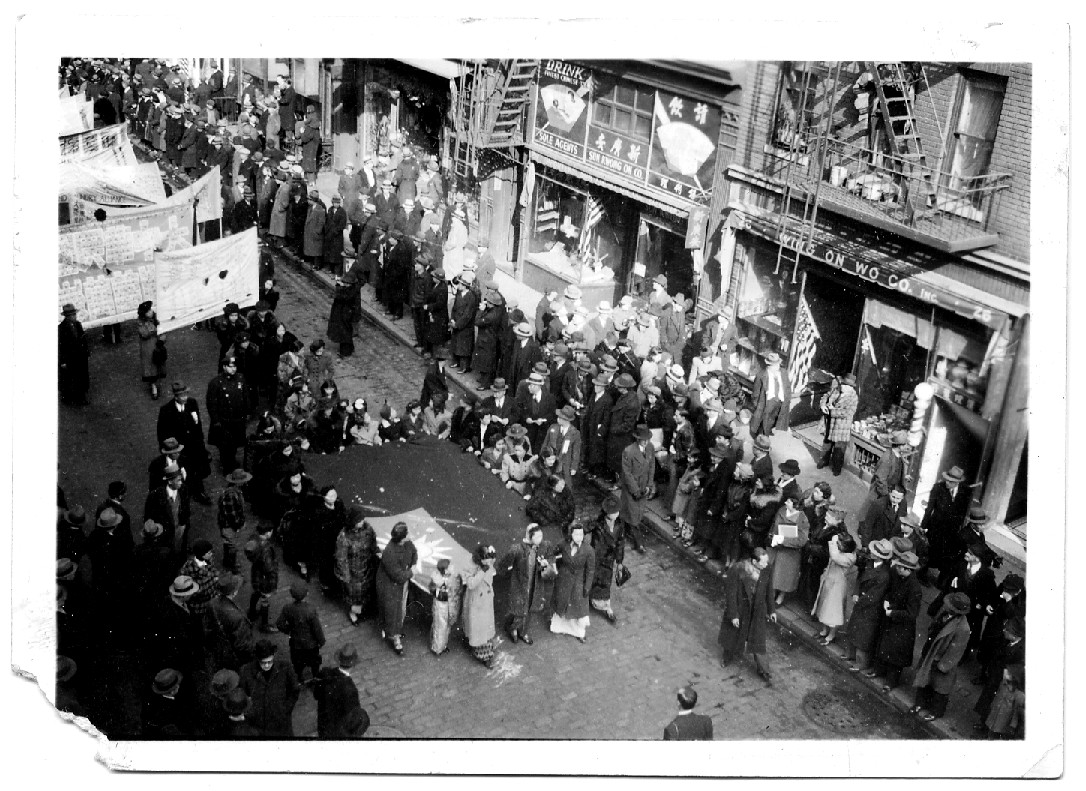 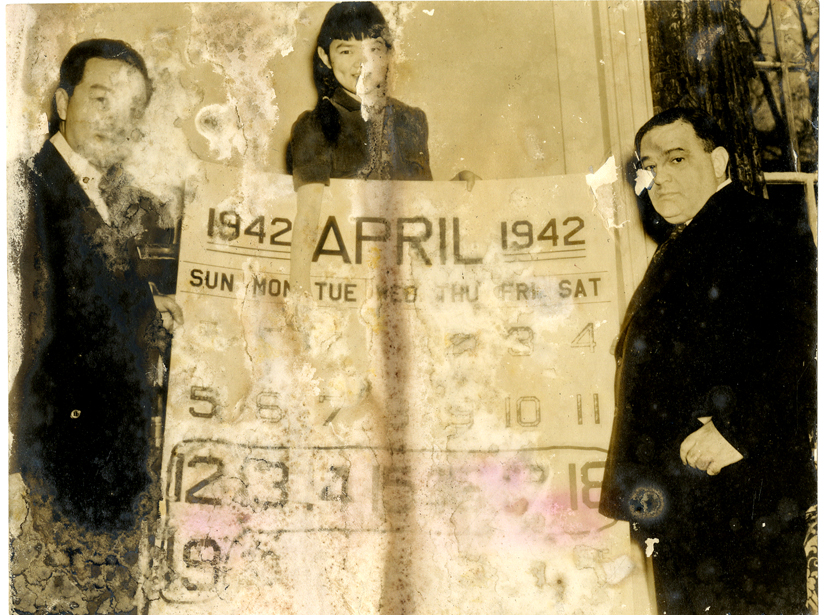 2009.023.029 This is a photograph of Marilyn Chu, who was 9 years old at the time, pointing to the third week on a calendar of April, 1942. It was a week set aside by Mayor Fiorello LaGuardia (right) as CHINA WEEK in New York City, during which the city planned to raise $1,750,000 for China. At left is Dr. Tsune-chi Yu, the Chinese Consul General in New York City. Courtesy of Marylin Chou, Museum of Chinese in America (MOCA) Collection. 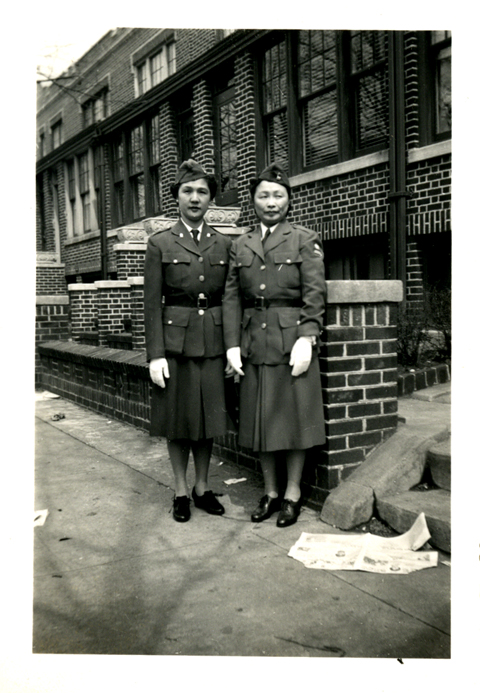 2015.037.406 Helen Typond (left) and an unidentified woman dressed in the uniform of the American Women's Voluntary Services (AWVS). Members of the AWVS provided support services to aid in the war effort, such as selling war bonds, working in emergency soup kitchens, serving as message couriers, and fire fighting. Typond’s AWVS assignment was at the Brooklyn chapter of the American National Red Cross. Courtesy of Douglas J. Chu, Museum of Chinese in America (MOCA) Collection.