If you would like to make a contribution towards the conservation of this document, please click to navigate to MOCA’s Sponsor an Object Donate Page and be sure to type in “Chinese Sportswear Workers Constitution” (for short) as the Object Name.

The above document is a handwritten constitution of the Chinese Sportswear Workers Social Association (CSWSA), a social organization for garment workers formed in New York Chinatown in 1970. This constitution, along with other documents, photographs, books, and memorabilia, were salvaged from CSWSA’s office and social space at 175 Canal Street and donated to MOCA by Heung Sang Tam in 2010. According to its constitution, dated June 1980, CSWSA’s membership was open exclusively to workers in the garment industry (group photos suggest that membership remained small and predominantly though not entirely older and male). Its mission was to foster solidarity and feelings of friendship among its members, and through mutual interaction and cooperation, increase their collective welfare. The group may have engaged in some advocacy on behalf of sportswear workers, such as encouraging members’ participation in the historic 1982 Garment Workers’ Strike and Rally at Columbus Park, however, CSWSA materials within MOCA’s collection mainly document social activities and outings organized for members. Photographs of such bonding activities, including of a 1971 meeting of founding members, a group tour, a weathered mahjong table around which members often gathered, celebrations of their children’s weddings, and collective mourning at members’ funerals are represented below. They show members present at mundane leisure events as well as important milestones in each others’ lives, and within the context of garment workers’ busy lives of long work hours and raising families, they document the concrete ways that CSWSA structured a social space for workers to build and maintain a work family and friendships well into members’ golden and sunset years. MOCA may have the only archival collection preserving this history, making this original copy of the group’s constitution a priority for conservation. 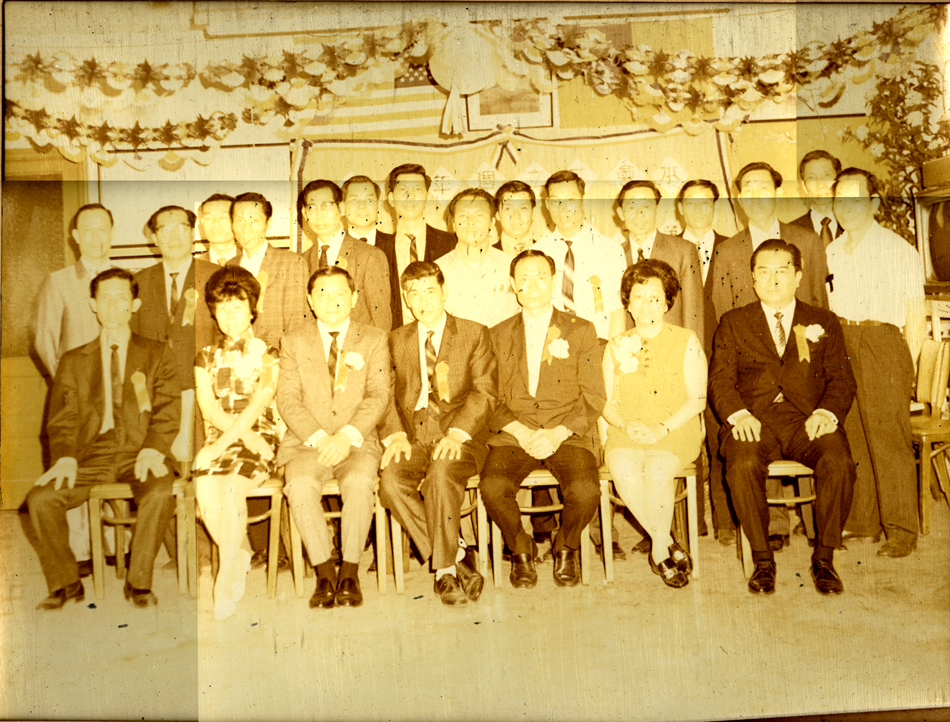 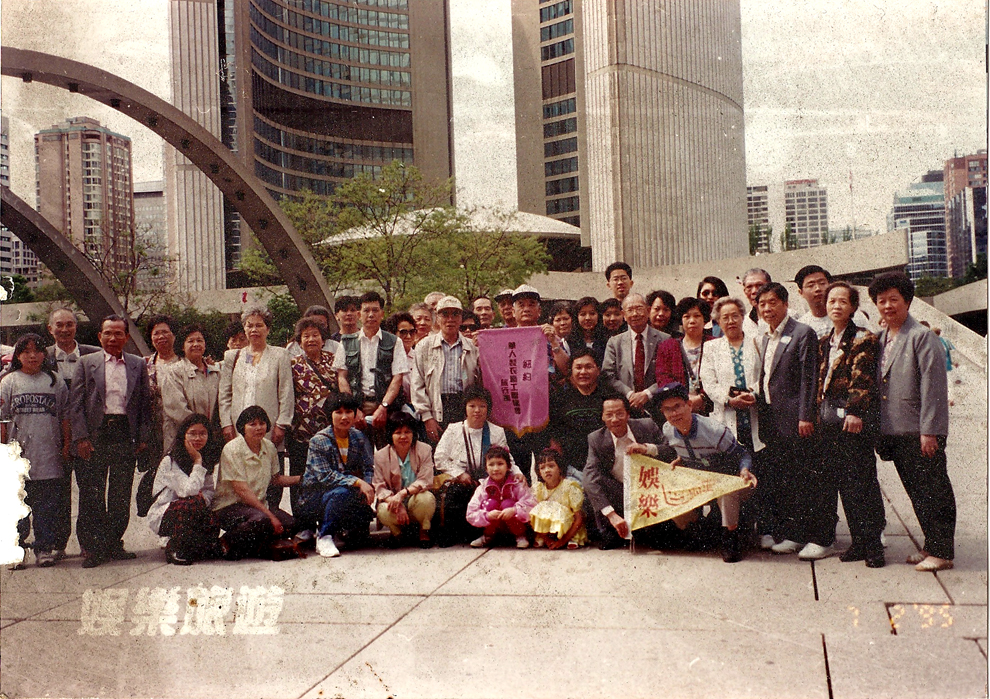 2010.040.038 Members of the Chinese Sportswear Workers Social Association of New York on a group tour of an unidentified place. Courtesy of Heung Sang Tam, Museum of Chinese in America (MOCA) Collection. 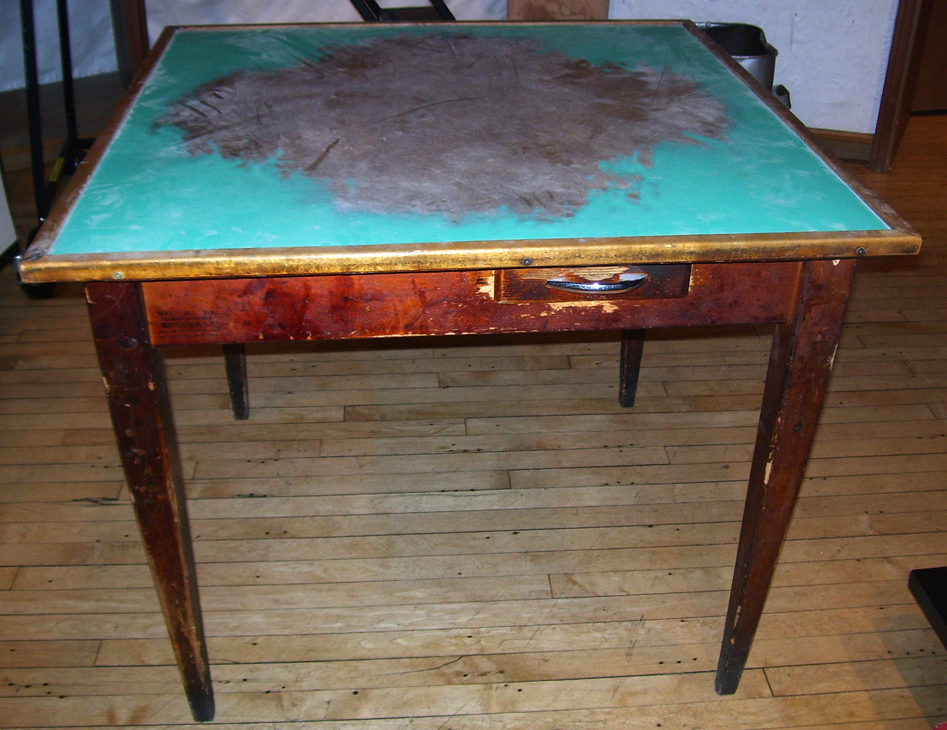 2010.040.202 Old wooden square mahjong table, one of many tables used by the Chinese Sportswear Workers Social Association. Each side has a drawer to place mahjong tiles. Courtesy of Heung Sang Tam, Museum of Chinese in America (MOCA) Collection. 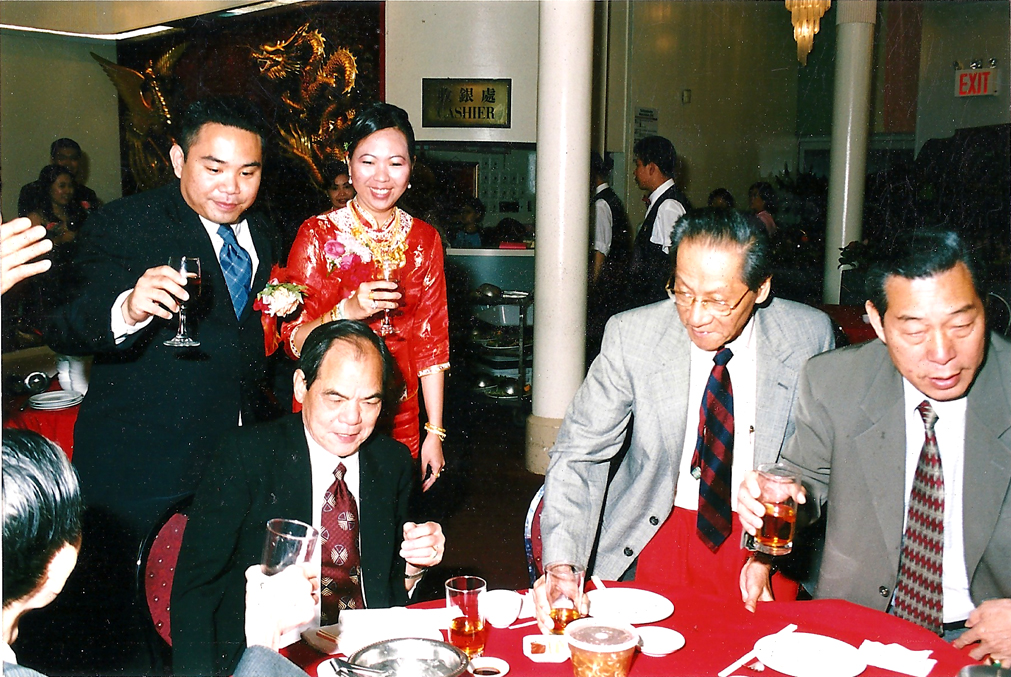 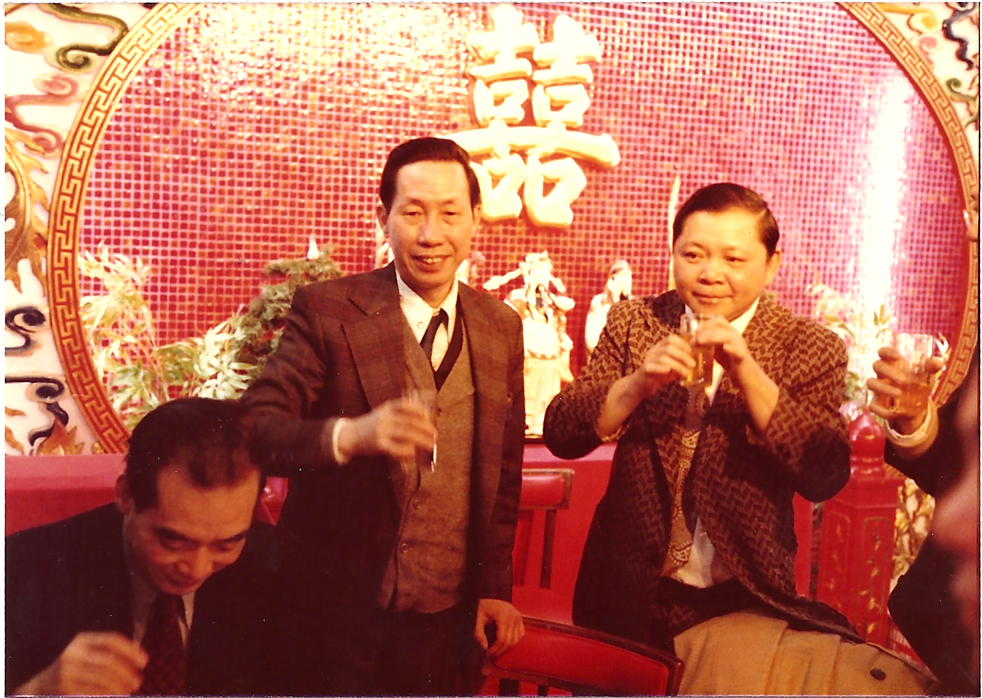 Members of the Chinese Sportswear Workers Social Association drinking in front of a double happiness character. They are presumably among celebrants attending a wedding banquet at a restaurant. Date unknown. Courtesy of Heung Sang Tam, Museum of Chinese in America (MOCA) Collection. 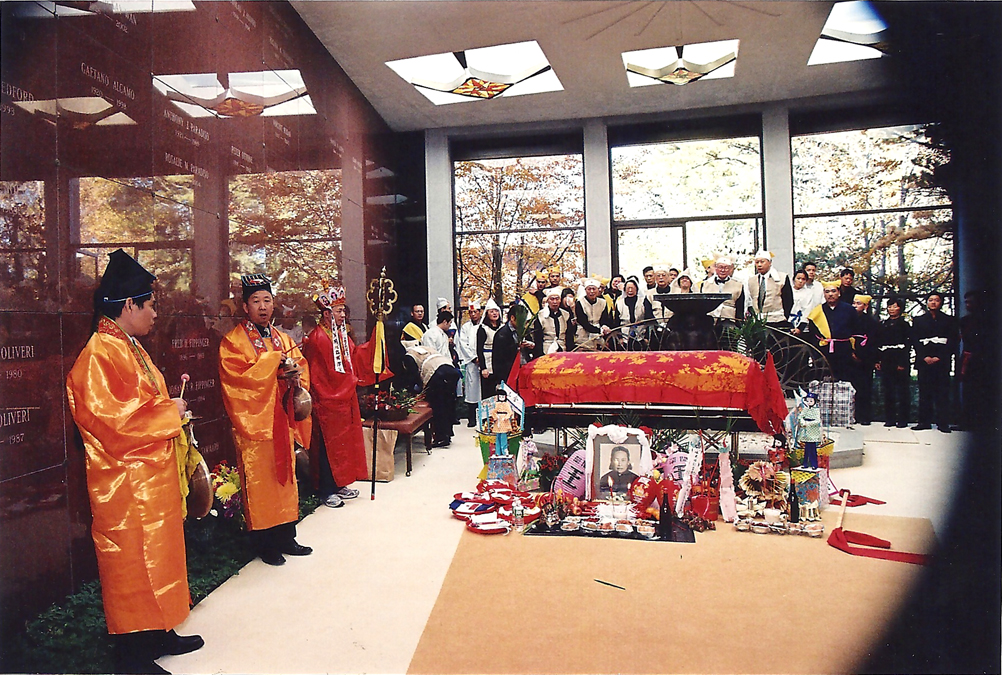 2010.040.159 Mourners at the burial of Shuying Wong-Chen. There are priests lining the walls. In front of the casket is a picture of the deceased along with food offerings, dolls, and incense. Behind the casket are a group of mourners dressed in burlap, white, yellow, and blue clothing. Courtesy of Heung Sang Tam, Museum of Chinese in America (MOCA) Collection. 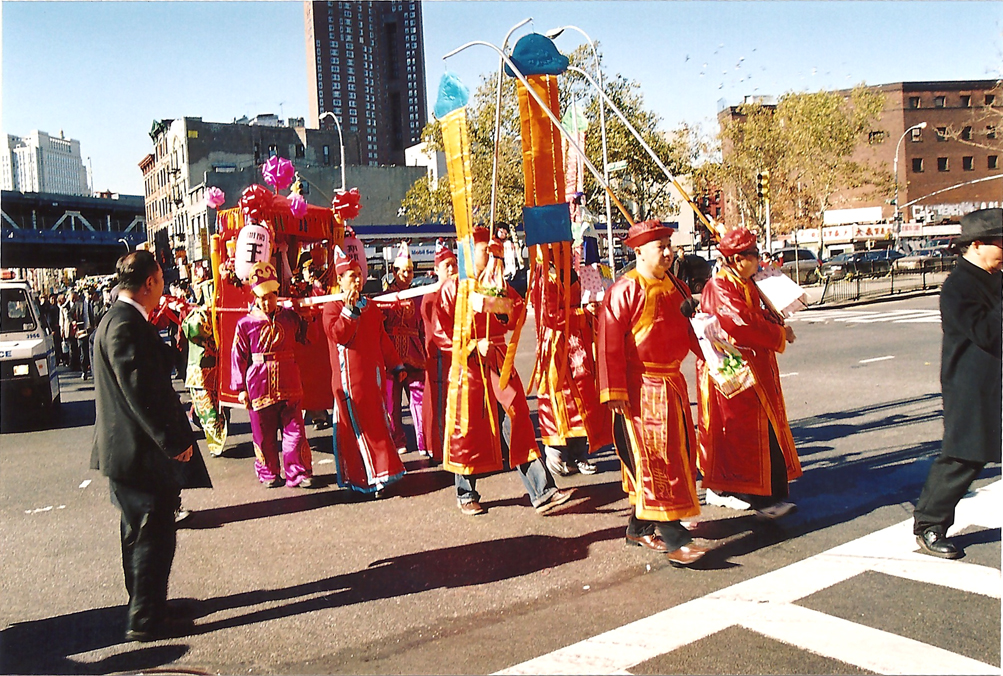 2010.040.152 A funeral procession on East Broadway and Pike Street in New York City Chinatown. A group of people in colorful ceremonial clothing are carrying a shoulder carriage that has lanterns and what looks like a picture of the deceased, which could be Shuying Wong-Chen. Courtesy of Heung Sang Tam, Museum of Chinese in America (MOCA) Collection. 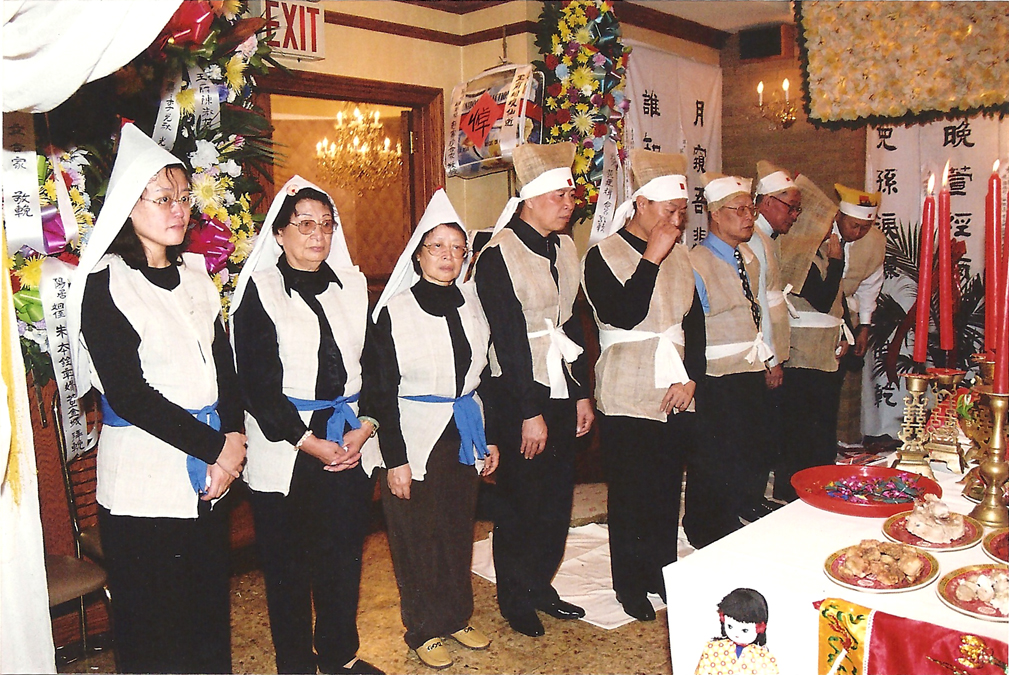 2010.040.162 Mourners in white and burlap are paying respects at the altar of Shuying Wong-Chen. Courtesy of Heung Sang Tam, Museum of Chinese in America (MOCA) Collection. 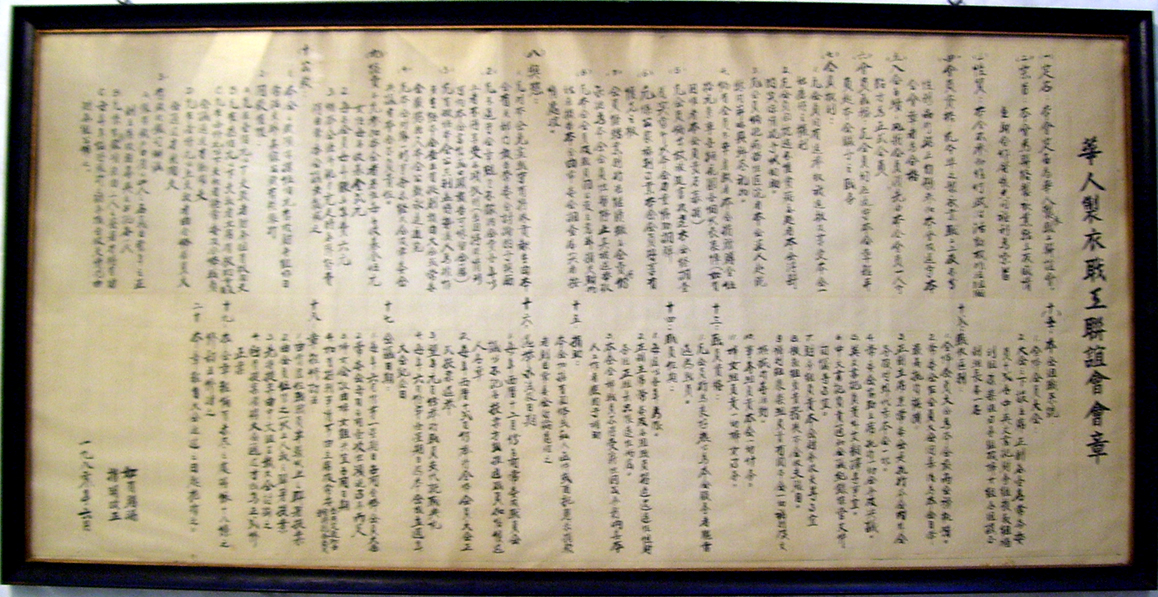 Water damage has exacerbated the paper’s warping, most visible at the top of the document, and has caused staining and ink bleeding, most prominent along the bottom half of the document.