If you would like to make a contribution towards the repair of these pair of objects, please click to navigate to MOCA’s Sponsor an Object Donate Page and be sure to type in “Maggie Gee’s Airman ID Card” (for short) as the Object Name. 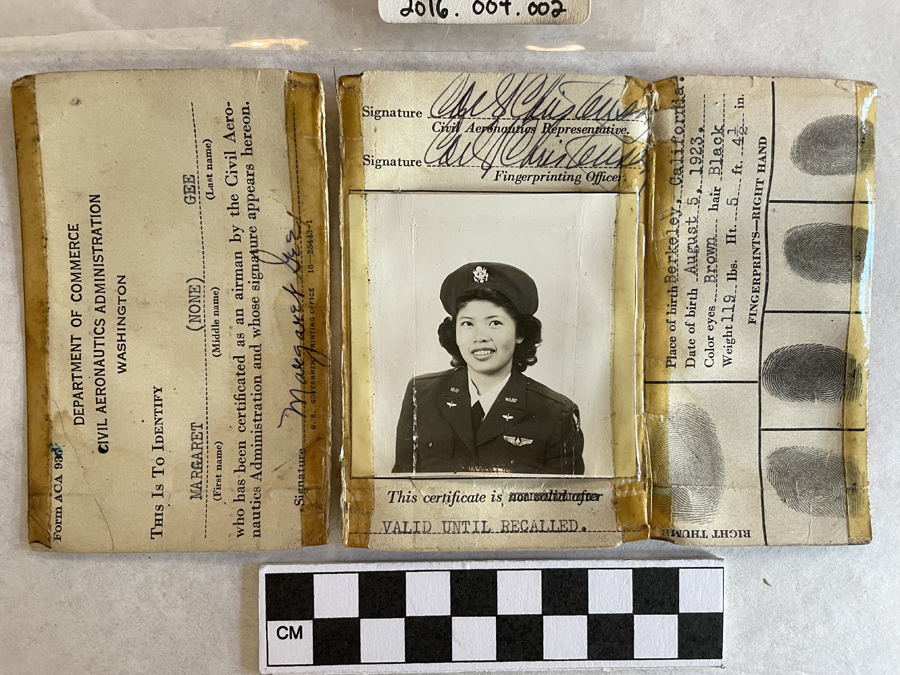 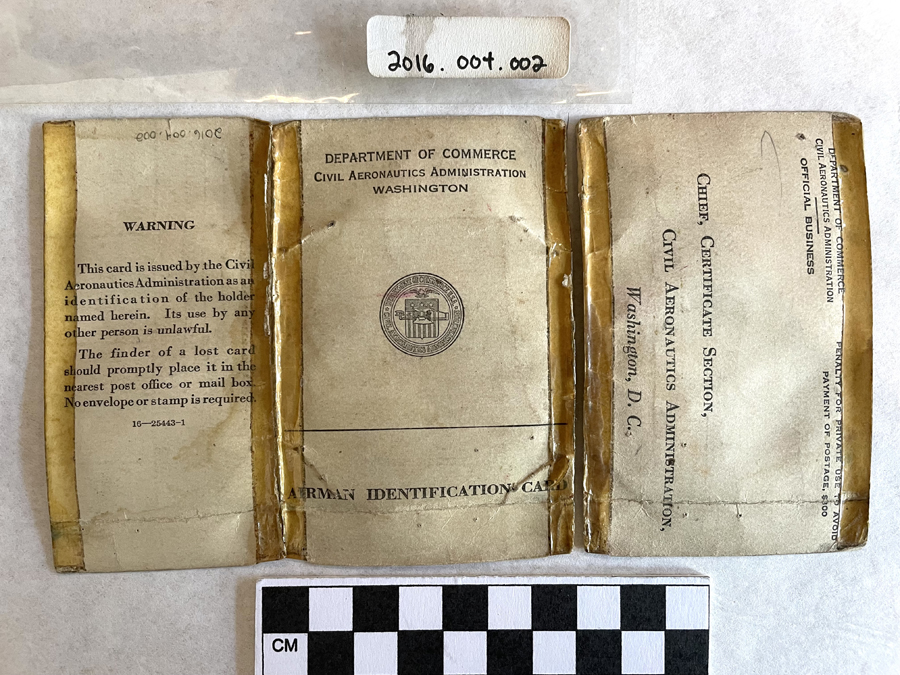 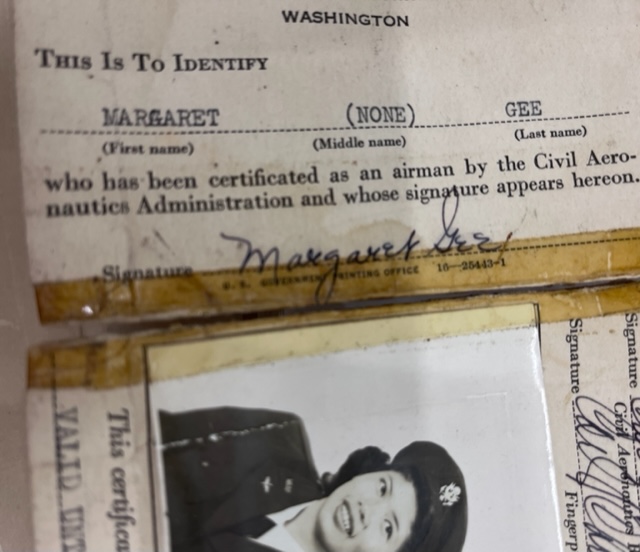 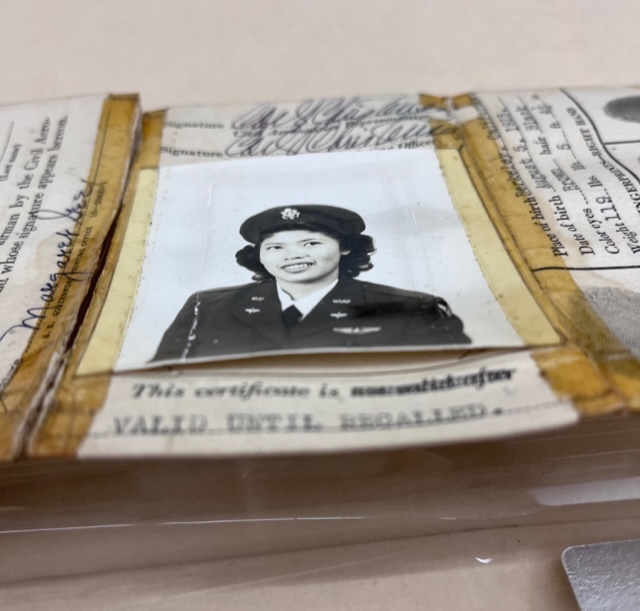 2016.004.002 Maggie Gee's Airman ID card. Note the staining caused by the adhesive and how the photograph is detaching from the card. 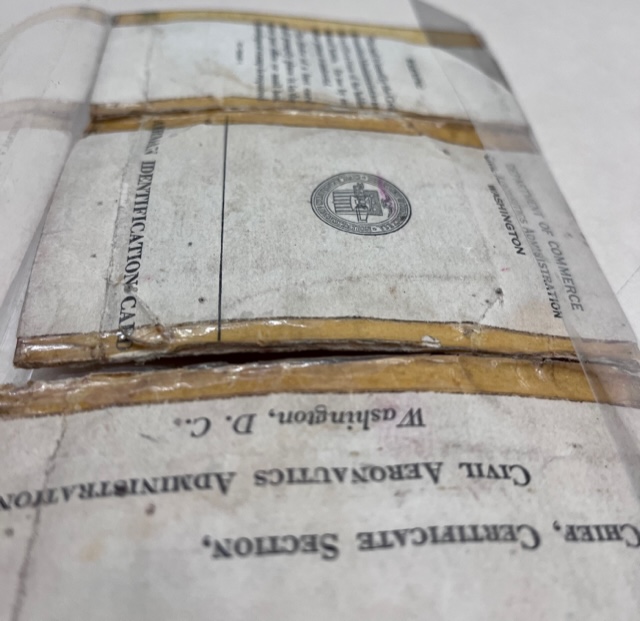 2016.004.002 Maggie Gee's Airman ID card. Note how the layers of paper are separating and the heavy grime that has built up on the surface. 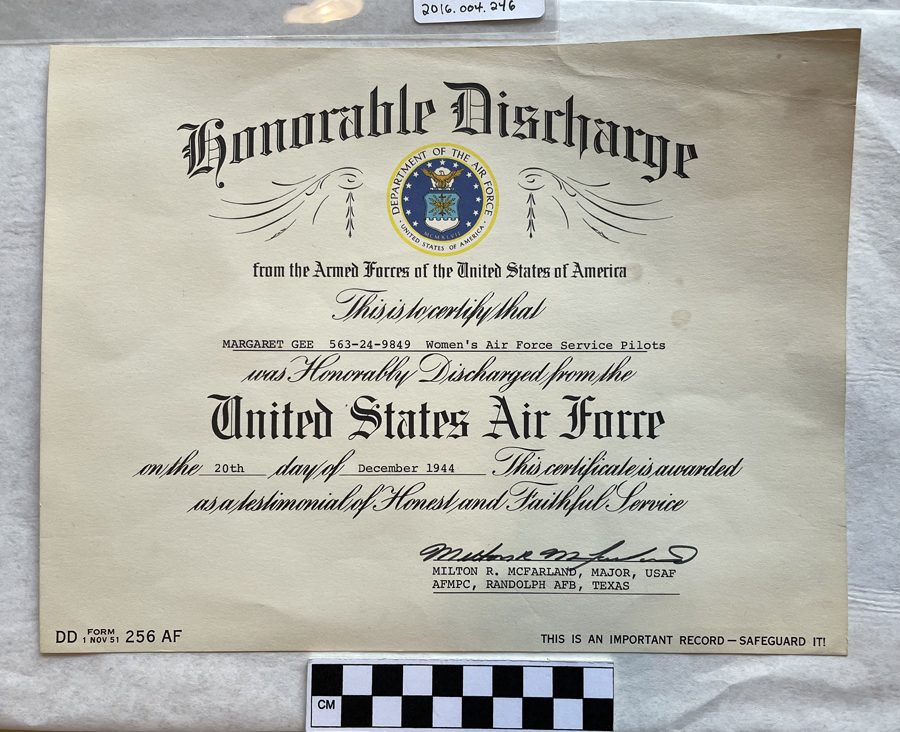 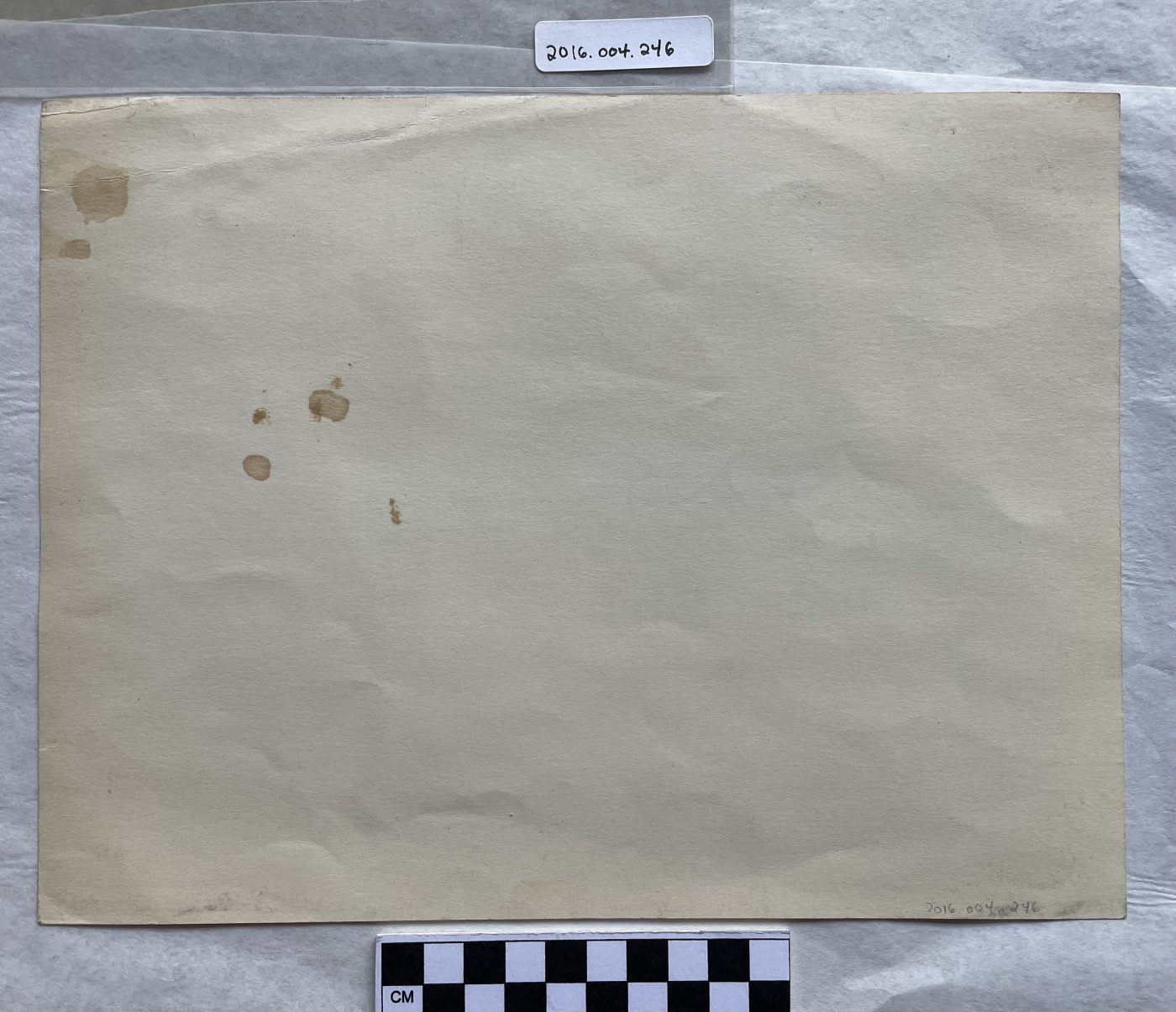 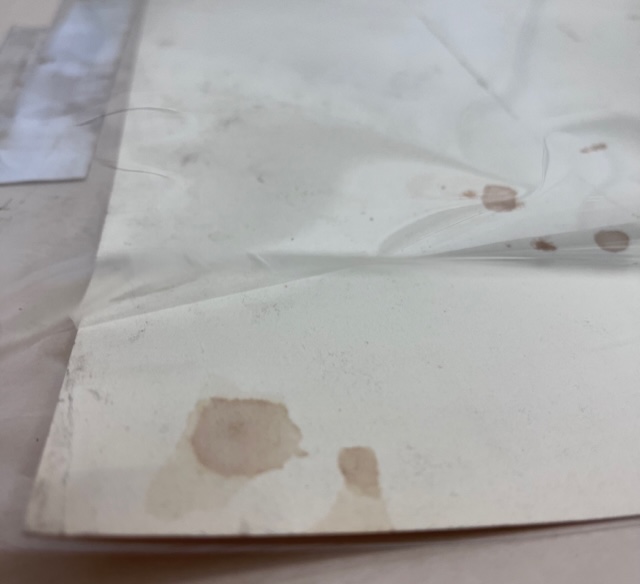 2016.004.246 Maggie Gee's Honorable Discharge Certificate, December 20, 1944. An example of the staining on the back. It is being kept in a protective sleeve to prevent further damage, the reflection of which can be seen on the photo.

Maggie Gee (1923-2013) was one of two Chinese American women (alongside Hazel Ying Lee) to join the groundbreaking Women’s Airforce Service Pilots (WASP) program during World War II. To avoid the controversy of placing women in active combat, the WASP program was classified as civilian, however, pilots nevertheless flew dangerous, critical missions and 38 WASP members lost their lives over the course of service. To free up male pilots for deployment, Gee and fellow WASPs performed vital functions, including safety testing new planes coming off assembly lines, transporting planes from factories to airbases, training male pilots, towing targets for live anti-aircraft gun practice, and copiloting fighter planes in mock air fights. It was not until 1977 that Gee and fellow WASPs were recognized and granted military status, finally making them eligible for veteran benefits and the full honors of a military funeral.

In joining the WASPs, Gee was fulfilling her dream of following in Amelia Earhart’s footsteps and using her passion and flying skills in service to her country. At the outbreak of the war, Gee, who was then a student at the University of California, Berkeley, decided to put her studies on hold to work in ship production at Mare Island Naval Shipyard alongside her mother. She gradually saved money for flight lessons to aid her application to the newly formed and highly selective WASP program.

Her Airman Identification Card, issued by the Civil Aeronautics Administration, and her Honorable Discharge Certificate attest to her courageous service and help tell the story of Chinese Americans and women breaking barriers and making history during World War II. These objects are being considered for display in MOCA’s new upcoming permanent exhibition.

The ID card is in poor condition. The card is worn and grimy from use and the three sections were previously mended with a pressure-sensitive tape that is now discolored and has stained the paper and photograph. The left tape mend at the left fold has given way and the card is now in two pieces and tenuously held together. The tapes and general use have caused deformation in the piece.

On the certificate, there is moderate surface grime overall, a crease across the top right, and some brown liquid stains at the bottom left that are partially visible in areas on the front.

For the Airman ID Card:

For the Honorable Discharge Certificate: 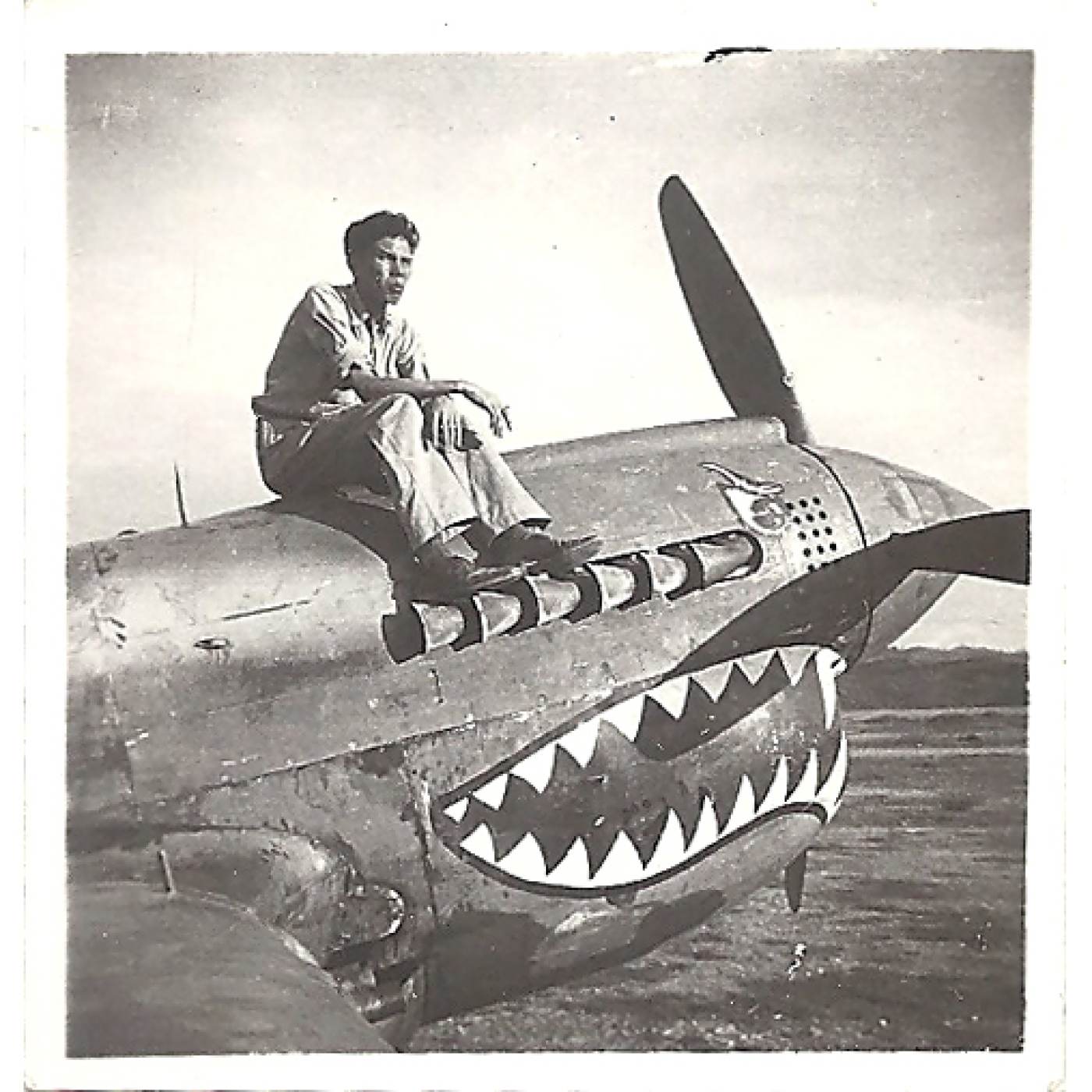